JaCorey Shepherd learning, growing as a corner with Eagles 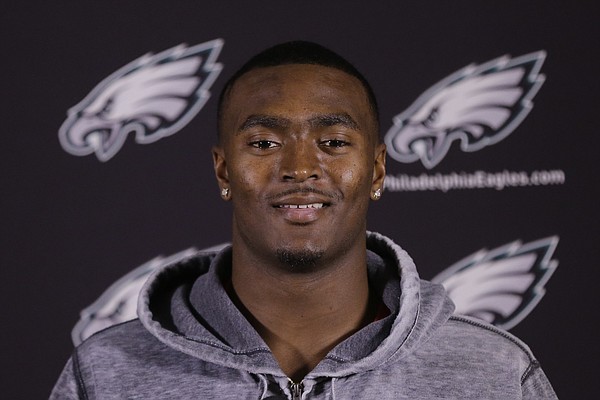 When JaCorey Shepherd arrived at Kansas four years ago as a wide receiver, his transition to college football included plenty of teaching moments.

Now that the All-Big 12 cornerback is with the Philadelphia Eagles, who drafted him in the sixth round and this past week signed him to a four-year contract, Shepherd said his initial introduction to the NFL has been less based in instruction. After all, the players are all professionals now, as the 5-foot-11 defensive back pointed out in a video interview for Philadelphia’s website.

But that’s not to say Shepherd's experience thus far has been devoid of learning. At the Eagles’ rookie mini-camp, the corner said, he found himself picking up new techniques at a fast pace. While playing press coverage — something he did at KU, too — he got too “handsy” on a few plays by doing things that were fine in college. He discovered he’ll have to get rid of some of those habits he picked up in his first three seasons of playing defensive back.

“It’s definitely a challenge,” Shepherd said, “but I’m good at learning and going with the flow as I get more reps.”

Eagles defensive backs coach Cory Undlin, who just joined the staff this offseason after working for Denver in the same role, wants his corners playing assertive press coverage at the line of scrimmage.

“To actually learn the proper way to press is actually gonna benefit me,” Shepherd said.

Plus, Shepherd knows some guys who just played for Undlin last season, with the Broncos. He brought up their names when asked if he had anybody he could lean on for guidance while finding his way in the NFL.

“Previous corners from the University of Kansas, Aqib Talib and Chris Harris, they kind of helped me,” Shepherd said, “and they told me they’ll be there for me if I’ve got a question about the process going forward.”

#Eagles have agreed to terms on a four-year deal with #EaglesDraft DB JaCorey Shepherd. #FlyEaglesFly pic.twitter.com/WDcIQvM9jK

Excited that he could graduate from KU and embark on his NFL career this spring, the newly minted Eagle, who can be seen practicing in his No. 36 jersey in the video, said it felt good going “full out” at mini-camp for the first time since suffering a tear in his left hamstring prior to KU’s pro day.

Now Shepherd can just enjoy himself on the field while playing the game he loves.

Shepherd said he can tell Chip Kelly’s staff is comprised of player-friendly coaches, which he likes. Now that he is in the league, the rookie corner wants to make sure he enjoys every moment, because he realizes not everybody gets the opportunity that is in front of him right now.