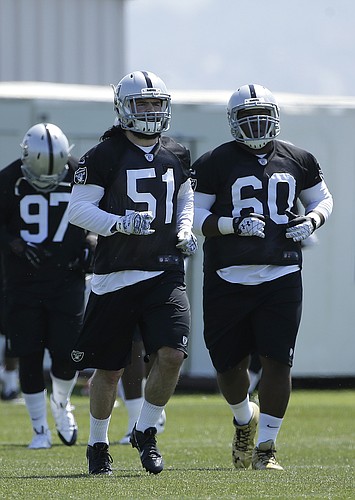 Back before Ben Heeney became a star football player at Hutchinson, or an All-BIg 12 linebacker at Kansas or a draft pick of the NFL’s Oakland Raiders, he was just a 12-year-old kid who seriously loved football.

In 2004, Heeney laid out his goals for becoming a football lifer by mapping them all out with a pencil and paper. A fifth-round pick in the NFL Draft 11 years later, the linebacker shared the list of goals from his childhood on Twitter.

Crazy!! My goals from 2004 when I was in grade school. Believe in yourself!!! pic.twitter.com/QPFmkxwHBz

Complete with a table of contents, the script for the rest of his life included goals for middle school, high school, college and beyond.

“In high school I want to make varsity on the football team. I want college coaches to come to the games and scout me for the team. I will play hard.”

“I would like go go to the University of Kansas or a better team in football. My parents went to KU. I want a football scholarship.”

“I want to play in the NFL. It would be fun and I would make a lot of money. I would train hard. After the NFL I would like to be the head coach for a college football team.”

Pretty impressive stuff when you consider all of it has come true so far and Heeney still has plenty of football to play before he chases that coaching goal, post-retirement.

The Raiders profiled the former KU star on their website, in a video that includes Heeney going through drills at rookie mini-camp in his No. 51 Oakland jersey.

The new member of Raider Nation said he has quickly adapted to wearing the silver and black.

“Since I’ve been drafted by the Raiders, I can just tell they have the best fan base in the nation,” Heeney said. “People comment on my Instagram and stuff. I’m just really excited to be a part of it.”

Heeney hopes to break through as an on-field contributor immediately with Oakland, in the upcoming 2015 season.

“I think I bring leadership, and I’m always all over the field making plays,” Heeney said. “You know, I’m just looking to bring that and help any way I can — special teams, defense, put me on offense. I’ll play anything.”