Kansas one of handful of teams capable of winning Big 12 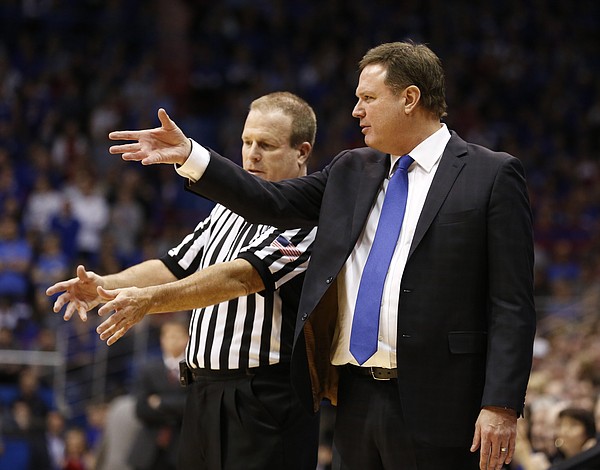 Kansas head coach Bill Self and official Gerry Pollard have a disagreement during the second half on Sunday, Jan. 4, 2015 at Allen Fieldhouse. by Nick Krug

The non-conference schedule finally has ended for Bill Self’s Kansas University basketball team, now ranked No. 12 in the nation, so coach Self and his Jayhawks have turned their attention squarely toward the Big 12 grind.

Before KU (11-2) begins conference play, Wednesday at Baylor (11-2 overall, 0-1 Big 12), Self met with the media Monday afternoon to talk about the loaded league and where the Jayhawks stand entering the home stretch.

Here are some of the highlights from the coach’s Q&A: 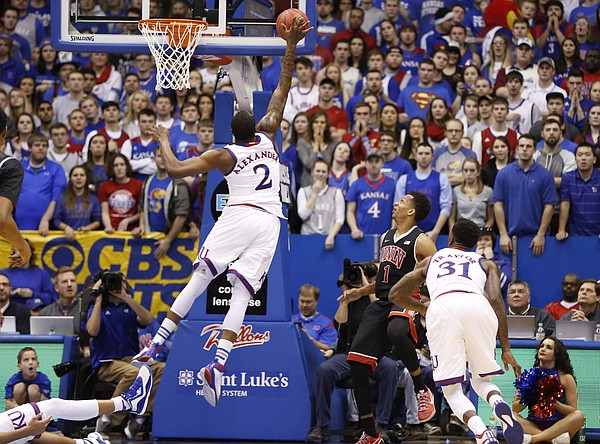 Kansas forward Cliff Alexander (2) blocks a shot by UNLV guard Rashad Vaughn (1) against the backboard during the second half on Sunday, Jan. 4, 2015 at Allen Fieldhouse. by Nick Krug

• Freshman Cliff Alexander is the best candidate to be an enforcer on the defensive end. Self thought he played really well against UNLV. KU needs him to be that guy. Even if he’s not starting, as is the case right now, he’s still their best low-post physical presence.

• Frank Mason III, hands down, has been the most consistent player for Kansas and the team’s MVP. When Devonté Graham went down, that put even more on him, and Mason has been consistent.

• Now that the non-conference is over, Self thinks KU at least has improved a lot since the Kentucky loss. Although KU has been inconsistent at times, they’ve played good enough to win — with the exception of the Temple game.

• Kansas has rebounded the ball pretty well, but Self can’t say the defense has been good. KU played a pretty good non-con schedule but their activity level on defense hasn’t been there for the most part. On offense, execution has gotten better since November. Looking at their stats, Kansas is last in the league in field-goal percentage (.426) and eighth in field-goal percentage defense (.419). But he doesn’t like to look at stats until teams have played four or five games in the league. 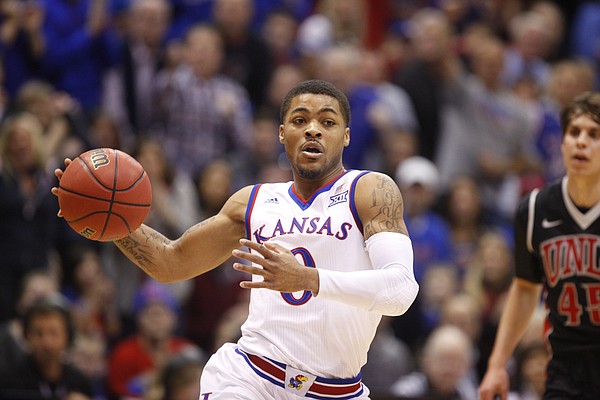 Kansas guard Frank Mason III (0) swoops in to the bucket after a steal from UNLV guard Cody Doolin (45) in the first half on Sunday, Jan. 4, 2015 at Allen Fieldhouse. by Nick Krug

• The Jayhawks had a two-hour meeting the other day, when Self “wasn’t real happy with them,” and asked them what they can hang their hat on. What they came up with: they’ve won some games when they didn’t play so well. … They’ve met a lot since the team got back from the holiday break.

• Stats can sometimes be very overrated, but the reality is they’re not way off regarding field-goal percentage. It’s fairly accurate. The difference between shooting 43% and 48% isn’t what they’re running, it’s energy level.

• Lsat year was similar in terms of room for improvement at this time of year, entering Big 12 play. KU has improved with some individuals playing better.

• In Self’s opinion, there are probably five teams in the Big 12 that have a legitimate chance of winning the league. And if one of the other teams gets on a roll, they might have a chance. From what he’s seen, there are some really good teams out there. Oklahoma, Iowa State and Texas all could win the league. Texas might be able to win it all, or at least make the Final Four. Watching OU and Baylor, those are two really good teams. And West Virginia is forcing 22.6 turnovers a game. … Self predicts injuries and timing of things will play as much a role in winning the Big 12 as anything else. You lose a key player during a really tough stretch and you could end up in a hole.

• Every year, at least privately, Self has wondered if his team has been good enough to win the Big 12. He thought there was no way KU would win the league by two games last year, following the loss to San Diego State. KU started off 1-2 when Mario Chalmers, Julian Wright and Brandon Rush were freshmen.

• Your non-conference schedule should put freshmen in position to be prepared for league play.

• Self would be disappointed every year if they weren’t a top-10 defensive team and they aren’t there this year. There is a lot of room for improvement on that end of the floor. KU can still become a great defensive team.

• With Baylor, every guy on the floor shoots 3-pointers. So the Jayhawks have to keep that in mind.

• There aren’t always plays in games where you get a chance to dive on the floor for a loose ball or jump to save a ball from going out of bounds. But as a coach you have to have your guys prepared to make those types of plays.

• Graham is doing some light running and cutting. This has just started and Self is hopeful they can put him in some kind of practice situation later this week. He’s in “terrible” shape right now. But he could be back to playing spot minutes pretty quickly. He’s progressed nicely. He hasn’t done anything full-speed. If it turns out he can’t be 100 percent or close a medical redshirt remains a possibility.

• KU’s bigs did a pretty good job on ball screens the past couple of games.

— Listen to the complete press conference here: Self discusses depth of Big 12, how often he has thought KU would win it

Now that the non-conference is over, Self thinks KU at least has improved a lot since the Kentucky loss.

That loss has clearly stained our conscious. The theme of it gets repeated over and over again, in articles and comments. Coach Self himself makes repeated reference to it.

As a Jayhawk fan I hate that we lost that way, and to Kentucky of all schools. When are we--all of us--going to get sick of the Wildcats and John Calipari and do what it takes to supplant KY as the most dominant team in recent history? We've got to get the guys here. The new apartments are going to help recruiting tremendously. But we've got to be imaginative about making KU even MORE attractive to recruits, especially in comparison to KY and Duke.

Joe I could not agree more. I think we need a guard development coach with a name, someone who is respected and has played in the NBA.

And the 25 point loss to Temple. Two good halves against a good team and I'm a believer in our chances to win the Big 12.

I think it really comes down to holding serve on the home court and pulling a win at one of the five other contenders. 13-5 could win a co-championship.

Duke right now has an upper and maybe unfair advantage that Coach K is well Coach K and he is also the head coach of the USA Men's Basketball Team. If he doesn't use that as a recruiting pitch I would be shocked.

Kentucky and more specifically Coach Cal has figured it out and mastered the art of managing OAD talent. UK is synonymous with putting guys in the league and right now if I'm an 17-18 yr old kid with aspirations of getting to the league Kentucky is #1 on my list regardless of minutes available, other situations, etc because Cal's track record of getting guys into the NBA is unmatched. There is no better coach in the NCAA of managing talent and getting guys into the NBA.

Now to combat...that is a tough question. Self's strong point has always been coaching up talent and getting the most out of lesser ranked recruits. Unless Self wants to completely change the formula that he has used for the last 10+ yrs we as Kansas fans might have to stomach watching the Duke's and the Kentucky's hoist up trophies while Self's tries to find the right mix of his guys that fit into his system and guys that he is able to coach up for two or three years.

Kentucky is only three years removed from a complete embarrassment in the NIT. Would we as a Kansas fan base be able to stomach a sub-par year with no Big 12 title to have a run at a national title two years later?

What better person than Coach K to coach USA Basketball. He's earned the position and we all should hope it is an advantage for him.

Considering who Cal has recruited, I'm not so sure his record getting guys into the League. Two years ago he recruited what many considered the greatest class of all time. Out of that class, only two went pro as OAD. The remainder, with the possible exception of D. Johnson will be there as Juniors.

I'd never ever count Bill Self out when it comes to recruiting or competing for the League title. Once we get the new resident hall and the DeBruce Center, Kansas, under Self, could never be considered a back seat to anyone.

I agree Suzi on paper with the new resident hall and the DeBruce Center we should never take a backseat to anyone.

I am afraid it is something else other than having all the pieces to attract the top players. Looking at all the transfers now, 300% increase over 3 years, and disparity now where the top 100 talent is choosing to attend it seems other things are afoot. A review of the top 100 commits for 2015 shows numerous schools attracting top talent that have rarely done so in the past. This thins out the remaining recruits among the Elite schools, and we seem to be on the waiting end the last few years to fill out our roster. Maybe the safer bet is to draw to Self's strength of player development and recruit players he can develop that will stay a few years. Look for the Masons and Grahams while still being open to one or the two OAD's if they want to come here and we have a specific need for. I do not know the right formula but chasing the dwindling pool of top players does not look to be the winning one.

My belief is Self and Cal initiates the request of their recruits to hold off until they know who is returning. Also another reason to hold off on signings is to determine who might be available on the transfer line, especially the 5th year guys.

In some cases they probably put heat on a guy to commit earlier, which is what I "heard" Self has done with Bragg.