Getting to know Kansas State 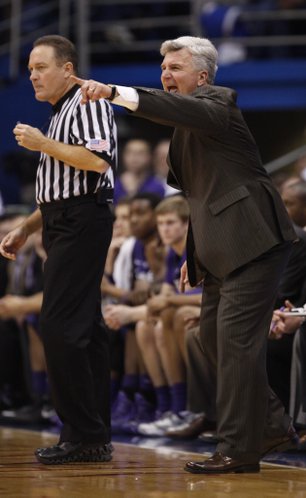 Kansas State head coach Bruce Weber directs his defense during the second half on Saturday, Jan. 11, 2014 at Allen Fieldhouse. by Nick Krug

Already 2-6 outside of Manhattan this season (1-4 in true road games, 1-2 at neutral sites), things don’t figure to get any easier for Bruce Weber’s Kansas State basketball team Saturday, when the Wildcats head east on I-70 to play the Sunflower Showdown at Allen Fieldhouse.

Kansas has knocked off K-State eight times in a row in Lawrence, with the last rivalry game road win for the guys in purple coming in 2006.

What’s more, the Wildcats (12-9 overall, 5-3 Big 12) enter the showdown having lost two of their last three games, falling at Iowa State and at home to West Virginia (both by six points), while beating Oklahoma State by 10 in Manhattan.

In order to beat Bill Self’s No. 9 Kansas team (17-3 overall, 6-1 Big 12), K-State will have to execute its defensive game plan and hope one of its top players is available (more on that to come).

Here are the K-State players the Jayhawks will have to worry about as they try to stay atop the Big 12 standings. 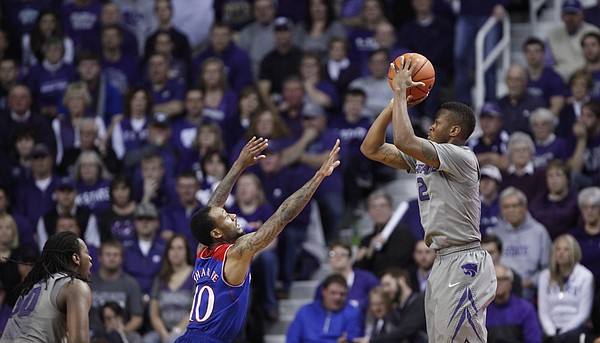 Kansas State guard Marcus Foster pulls up for a three before Kansas guard Naadir Tharpe during the second half on Monday, Feb. 10, 2014 at Bramlage Coliseum. by Nick Krug

Foster is by far the Wildcats’ top 3-point shooter, having hit 39 more than teammates Justin Edwards and Nigel Johnson (12 each).

Last season against KU, Foster averaged 13.5 points on 36.4% shooting. But Self said Friday he can tell Foster asserts himself more on offense this season, especially in Big 12 play.

The dynamic sophomore guard is averaging 13.4 points through eight league games while doing some of his damage by getting to the foul line — 32 for 42 (76.2%) in Big 12 action.

K-State has benefited when Foster isn’t doing the scoring alone, though. The Wildcats are 8-2 when three players reach double figures in the same game. Foster averages 15.9 points in those contests.

Foster went through a bit of a slump earlier this season, and even finished scoreless at Oklahoma State to open Big 12 play. Since then, he’s averaging 15.3 points and shooting 41.3%.

He had his worst shooting night since the league opener earlier this week, vs. WVU, making just 4 of his 12 shots.

Kansas teammates Jamari Traylor, center, and Tarik Black defend against a shot by Kansas State forward Nino Williams during the second half on Saturday, Jan. 11, 2014 at Allen Fieldhouse. by Nick Krug

Williams’ status for Saturday afternoon, as of Friday, was up in the air. The athletic wing hurt his knee Tuesday during K-State’s home loss to the Mountaineers. http://www2.kusports.com/news/2015/ja...

If he can’t play, the Wildcats will be without their leading rebounder (4.9 per game), and a guy who has put up 11.7 points while hitting 53.4% of his shots.

Listed as day-to-day, Williams was named co-Big 12 Player of the Week on Monday, and had led K-State in scoring in three straight games, prior to playing 8 minutes vs. WVU:

K-State would miss his energetic approach, too, if he’s unable to go. The Wildcats have a point system that tracks each player’s deflections/blocks, steals, dives, loose balls, offensive rebounds and charges drawn, and Williams has tallied a team-best 162 points. 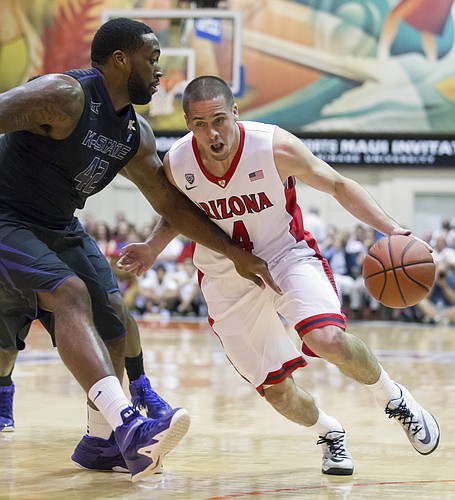 Arizona guard T.J. McConnell (4) attempts to drive past Kansas State forward Thomas Gipson (42) in the first half of an NCAA college basketball game at the Maui Invitational on Tuesday, Nov. 25, 2014, in Lahaina, Hawaii. (AP Photo/Eugene Tanner) by Eugene Tanner

The senior post player has become a steady source of offense, hitting 57.3% of his field goal attempts and 74.8% at the free-throw line.

In his seven previous games against Kansas, Gipson has averaged just 5.3 points and 4.4 rebounds, but K-State relies upon him more this season.

He has produced double figures in six of his last 12 games, most recently getting 15 at Iowa State. However, the big man also struggled against West Virginia, making 2 of 6 shots and scoring 8 points in the loss.

This season, he leads K-State in free throws made and attempted — 89 for 119.

Defensively, he leads the Wildcats with 10 charges drawn and 14 blocked shots.

— hoop-math.com nugget: Tied with Justin Edwards for the team lead in put-backs on offensive rebounds (12), Gipson takes 60.5% of his shots at the rim and converts 72% of them. 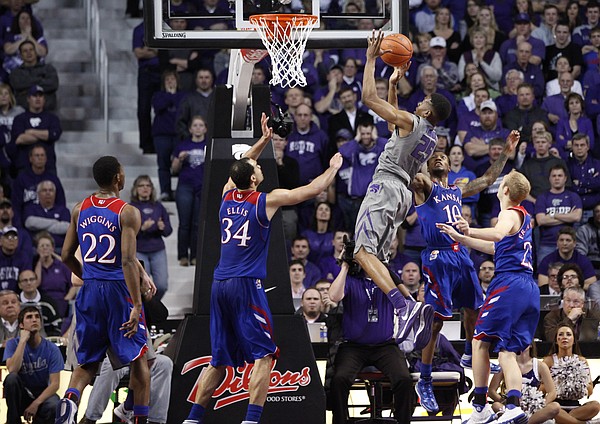 Though athletic and active, the second-year wing at times hasn’t provided much offensively: 5.8 ppg on the season on 45.7% shooting. His numbers have improved a little in eight Big 12 games, which coincides with Weber inserting him in the starting lineup: 6.6 points on 48.6% shooting.

Iwundu did score a season-high 12 points (shot 6-for-9 on free throws), pull down 6 rebounds and pass out a team-best 3 assists against West Virginia. But it was just his fourth double-digit output of the season.

— hoop-math.com nugget: Of Iwundu’s 92 shot attempts, he only has made 14 away from the rim. 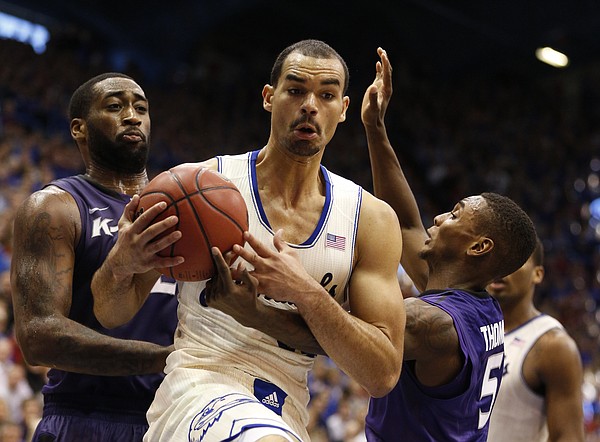 Kansas forward Perry Ellis comes down with a rebound between Kansas State players Thomas Gipson, left, and Jevon Thomas during the second half on Saturday, Jan. 11, 2014 at Allen Fieldhouse. by Nick Krug

Another unproductive source of scoring in the starting five, Thomas averages 5.4 points on the season. It’s even worse in Big 12 games: 3.5 points and 37% shooting.

If he’s on the floor late, Thomas is the guy you want to foul if you need to: 10 of 21 in the final five minutes of games this year.

What Thomas does bring, though, is ball-handling and passing. He’s eighth in the Big 12 with 3.6 assists a game.

He’s also a disruptive defender, who has 25 steals to his credit.

Thomas hasn’t made more than 2 shots in a game since a 13-point outing at Tennessee in the first week of December. He only went 1-for-2 vs. WVU and combined to shoot 0-for-7 in his previous two games.

None by Collegian - Sports

The most likely Wildcat to throw down a dunk (11 this season), the transfer from Maine comes off the bench and is K-State’s No. 4 scorer: 6.4 points, 39.5% shooter.

Edwards has averaged 3.9 rebounds in Big 12 games and three times this season has led his team in boards.

He also has swiped a team-high 26 steals.

Another transfer, who formerly called Lipscomb and NW Florida State home, Hurt might have his name called more often than usual as Weber tries to match up with KU’s front line.

The big man averages just 4.8 points and 3.3 boards a game. But he’s fourth on K-State with 25 offensive rebounds despite playing 13.7 minutes. He hauled in 6 of those at Long Beach State in November.

Despite his size, Hurt only has blocked 3 shots this season.