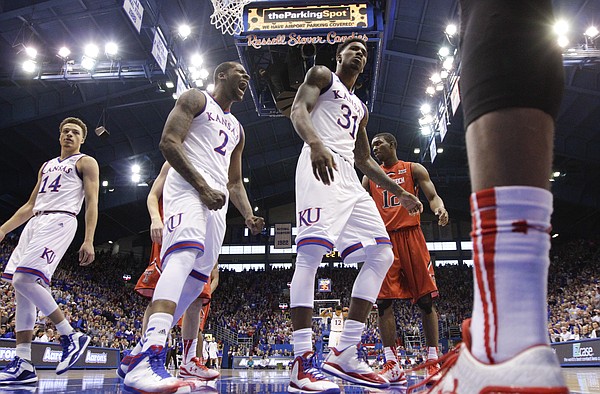 Kansas forward Cliff Alexander (2) celebrates a dunk by Kansas forward Jamari Traylor (31) as he casts a glare at at Texas Tech player during the first half on Saturday, Jan.10, 2015 at Allen Fieldhouse. At left is KU guard Brannen Greene. by Nick Krug

Little — if anything — went right for Texas Tech the last time it faced Kansas.

The Red Raiders lost by 32 points in their Jan. 10 trip to Allen Fieldhouse, and they struggled to hit shots from anywhere:

And those types of nights have kept the Red Raiders (12-12 overall, 2-9 Big 12) from finding much success in conference play. Texas Tech ranks:

What Texas Tech has done, however, is win it last two home games, most recently against Kansas State, and Jan. 24 against Iowa State.

Now, the Red Raiders are coming off a 75-38 spanking at the hands of the very same (and vengeful) Cyclones this past weekend.

But No. 8 Kansas (19-4, 8-2) also enters the rematch off a loss, at Oklahoma State, and need look no further than the ISU loss at Lubbock, Texas, as reason to show up at United Supermarkets Arena ready to compete.

As a refresher, here are the Red Raiders the Jayhawks will have to worry about as they look to get back in the win column. 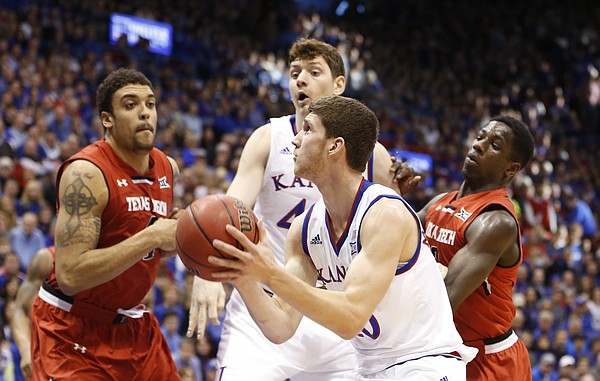 Kansas guard Sviatoslav Mykhailiuk (10) gets to the bucket past Texas Tech forward Justin Jamison (4) and guard Devaughntah Williams during the second half on Saturday, Jan.10, 2015 at Allen Fieldhouse. Also pictured is Kansas forward Hunter Mickelson. by Nick Krug

Williams is the only Red Raider averaging double-digit points on the season (10.5 points) and the Jayhawks completely shut him down in Lawrence.

He’s shooting 36% from the field and 32.6% from 3-point range in Big 12 games, and tied with Robert Turner for the team’s leading scorer honors at 9.1 points per game.

He punished both ISU and K-State in home wins, scoring a career-high 22 points against each of them.

— hoop-math.com update: On 32 of his 36 made 3-pointers, Williams’ teammates have set him up with an assist. But he can get to the rim on his own, with 42 field goals there (only 12 assisted on). 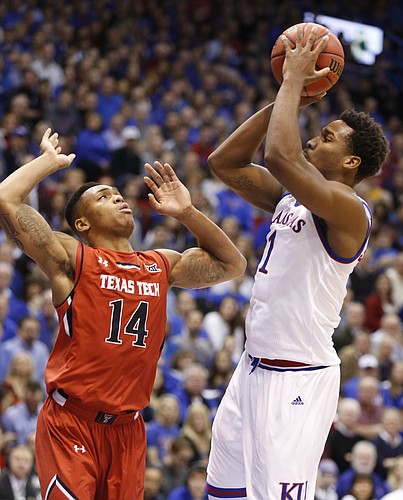 Like Williams, his shooting numbers in conference games aren’t great: 35.2% from the floor, 37.2% on 3-pointers.

Turner hit three 3-pointers in both of Tech’s Big 12 wins, against the Cyclones and Wildcats. 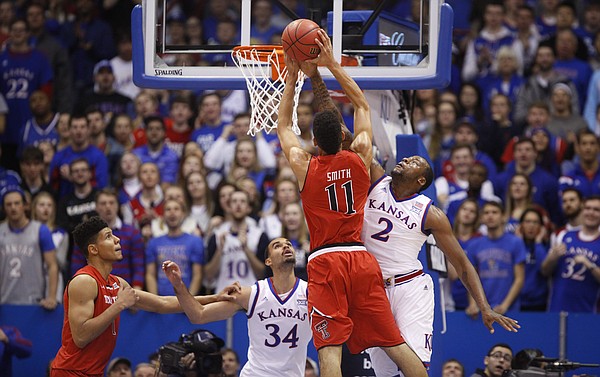 Kansas forward Cliff Alexander (2) gets a hand on a shot by Texas Tech forward Zach Smith (11) during the first half on Saturday, Jan.10, 2015 at Allen Fieldhouse. Also pictured are Kansas forward Perry Ellis (34) and Texas Tech center Isaiah Manderson. by Nick Krug

He’s actually the only Red Raider who has started all 11 Big 12 games, and accordingly leads Tech with 30.3 minutes a game in the conference. His 5.2 rebounds and 1.5 blocks in league games lead the team, and he scores 5.4 points on 35.7% shooting. 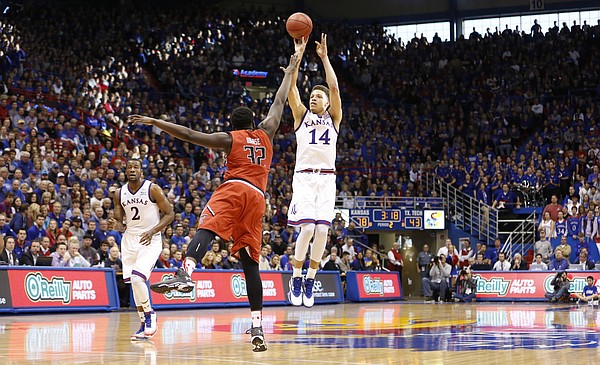 Kansas guard Brannen Greene (14) puts up a three over Texas Tech forward Norense Odiase (32) during the second half on Saturday, Jan.10, 2015 at Allen Fieldhouse. At left is Kansas forward Cliff Alexander (2) by Nick Krug

The guy is massive, but his minutes have been limited in Big 12 play (16.4 a game) in part because of his struggles offensively. Odiase is only hitting 34.3% of his shot attempts and 28% of his free throws in the league, while averaging 3.1 points and 3.5 rebounds.

Odiase’s 52 offensive rebounds lead the team, and he averages 2.3 a game on the offensive glass.

— hoop-math.com update: As you might expect from a guy his size, Odiase leads Texas Tech with 20 put-backs on the offensive glass. That’s how 29.1% of his shots at the rim are generated — a percentage that has increased since the first meeting with KU. 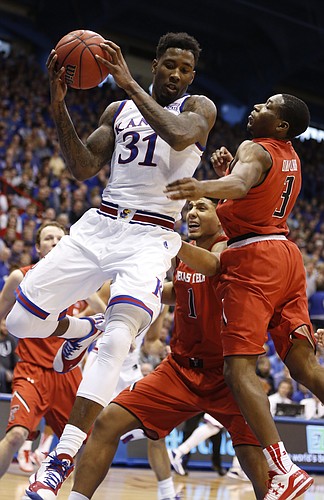 Kansas forward Jamari Traylor (31) pulls the ball away from Texas Tech guard Randy Onwuasor (3) during the second half on Saturday, Jan.10, 2015 at Allen Fieldhouse. by Nick Krug

Another Red Raider who really is struggling in Big 12 play, he has only made 25% of his shots overall and 23.1% of his 3-pointers, while scoring 3.0 points.

— hoop-math.com update: Onwuasor isn’t helping his shooting percentage with his shot selection. He has made just 6 of 34 2-point jumpers (17.6%) this season. 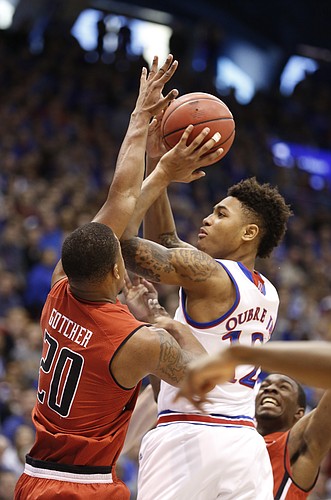 Kansas guard Kelly Oubre Jr. (12) turns for a shot against Texas Tech guard Toddrick Gotcher (20) during the first half on Saturday, Jan.10, 2015 at Allen Fieldhouse. by Nick Krug

Already lacking depth entering Big 12 play, the Red Raiders have even less fire power now that freshman Justin Gray is expected to miss the rest of the season due to knee issues. He was averaging 6.7 points on the season.

To make matters worse, coach Tubby Smith dismissed junior forward Justin Jamison from the team last week for violating team rules. And he was the only player on the roster who scored in double figures at Kansas, in January: 12 points, 4/7 FGs.

That leaves Gotcher, sometimes a starter, as the best option — by far — off the Red Raiders’ bench.

Averaging 7.1 points in Big 12 action, KU rendered him a non-factor offensively in the first meeting.

Gotcher caught fire in Tech’s home win over ISU, hitting 5 of 9 3-pointers on the way to 17 points.

Tech needs him hitting to have a chance.

— hoop-math.com nugget: Most of his shot attempts (58.9%) come from long range and teammates have set Gotcher up for 25 of his 27 made 3-pointers. 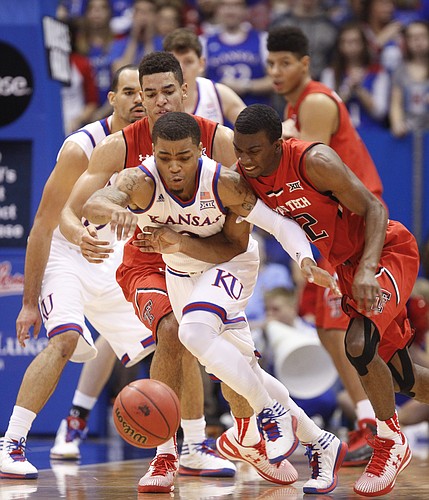 Kansas guard Frank Mason III (0) hustles for a loose ball after knocking it away from Texas Tech guard Keenan Evans (12) during the first half on Saturday, Jan.10, 2015 at Allen Fieldhouse. by Nick Krug

His minutes have increased as the season progresses, and in Big 12 games he’s averaging 5.3 points and 2.7 rebounds, while shooting 29.6% from the floor and 30% from 3-point range.

Evans had a breakout game at Oklahoma State, scoring 18 points, powered by 3-for-4 shooting from 3-point range.

This is going to be a dead atmosphere. A bad team in a place not easily accessible to KU alums means this will be a half empty arena with no energy in it. KU is going to struggle and look very lazy in this game because of it. Breaking 70 would be a good offensive performance.

I would agree with you if it wasnt for the fact we are coming off a frustrating loss. I think we come out and win big.

Recipe for a trap game.

Wont be a trap as everybody knows of the IowaSt defeat/embarrassment, and coming off a loss, KU should be fired up--it should be a case of "god help KU's next opponent". If we come out flat, and get into a dogfight against these guys (see article above), then KU has bigger issues. TubbyTechies also beat KState, which doesnt mean much, other than to give Weber's lousy team that true jolt of reality that, yes, KState really does suck...

Lackluster 2nd half against OkieSt was a major meltdown in intensity, pretty much inexcusable. Poise against pressure-D?

If I were a betting man ( I am not ), I would take TT and the 12 points. This is the type of team that could lose two in a row on the road. Players probably have little respect for TT after beating them badly. Ellis is playing soft. We are starting to depend on our outside shooting to much because there is no one inside who can score. Trap game for sure. KU if they win will probably win ugly. GOD knows I hope I am wrong...