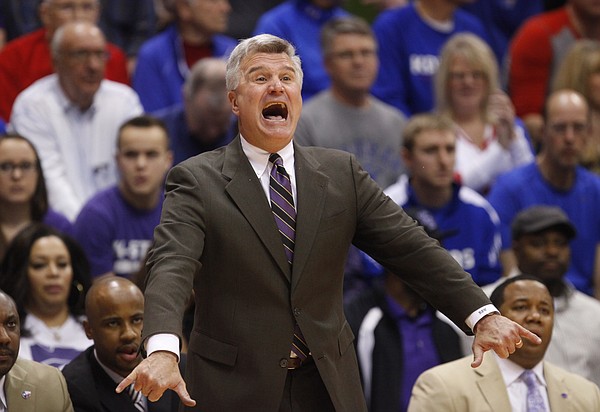 Kansas State head coach Bruce Weber looks to grab his players attention during the first half on Saturday, Jan. 31, 2015 at Allen Fieldhouse. by Nick Krug

By the end of Big Monday, the fans inside Bramlage Coliseum might sound like Bruce Weber. Kansas State’s fan base delights in nothing more than knocking off rival Kansas, and the Jayhawks anticipate a raucous road environment.

The Wildcats (13-15 overall, 6-9 Big 12) will have to embrace and thrive off of all the crazy going on in the stands, because they are in desperate need of a win.

There are, of course, more tangible, on-the-court things the Wildcats have at their disposal, too — and they did beat Oklahoma in Manhattan just over a week ago. They might be eighth in the Big 12 standings, but they have a few things they can hang their proverbial hats on.

In conference games, Kansas State is:

If K-State is able to score a rivalry win, it will have to do it on the defensive end of the floor.

Now, as a refresher, here are the Wildcats that KU will have to worry about inside the famed “Octagon of Doom.” 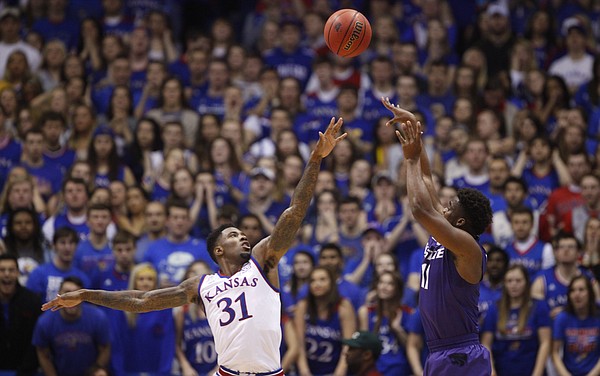 Kansas State forward Nino Williams (11) puts a shot over Kansas forward Jamari Traylor (31) during the first half on Saturday, Jan. 31, 2015 at Allen Fieldhouse. by Nick Krug

Questionable headed into the first Sunflower Showdown of the season, Williams wasn’t at full strength vs. KU in Lawrence.

In 15 Big 12 games this season, he has averaged 10.9 points, 5.5 rebounds and leads his team with 31 offensive rebounds. Williams is shooting 45.3% from the floor in conference and has proven to be K-State’s best free-throw shooter, hitting 88.4%.

— hoop-math.com update: Williams operates mostly on short- to mid-range offense. 60.7% of his attempts have come on 2-point jumpers. He has hit 56 of 136 (41.2%) in that range, with his percentage dipping over the past few weeks. 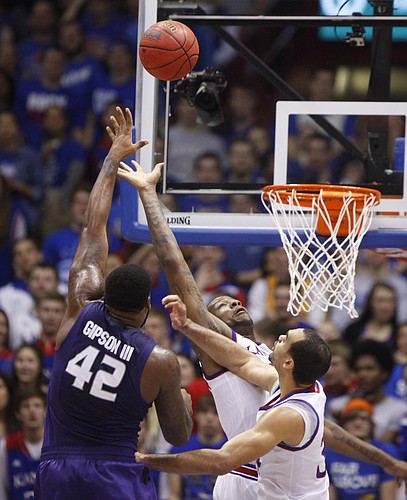 Kansas State forward Thomas Gipson (42) puts up a shot over Kansas forward Perry Ellis, right, and forward Cliff Alexander during the first half on Saturday, Jan. 31, 2015 at Allen Fieldhouse. by Nick Krug

If the guy can get 19 points against Kansas on the road, expect an even bigger night from the senior in his last home game against the Jayhawks.

He was the only Wildcat to score in double figures (11 points) at Baylor.

His 4 offensive boards at KU tied his season high, his 7 field goals made still stand as his best this season and his 19 points marked his best scoring performance in conference play.

KU better find a way to keep him off the offensive glass or Gipson might set a handful of new season-best marks.

— hoop-math.com update: Leading K-State in put-backs on offensive rebounds (18), Gipson takes 59.4% of his shots at the rim and converts 67.3% of them (that number has dropped by just under 5 percent since the last game vs. KU). 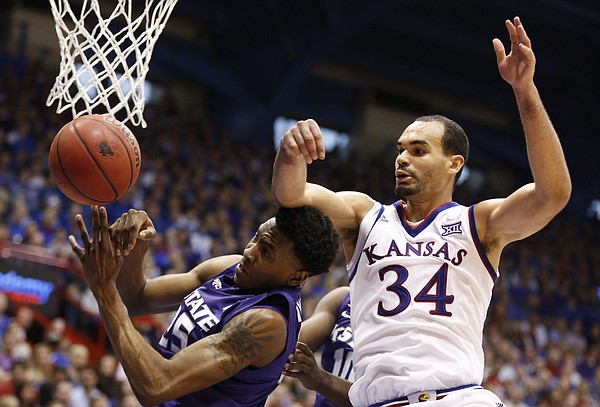 Kansas forward Perry Ellis (34) fights for a rebound with Kansas State forward Wesley Iwundu (25) during the second half on Saturday, Jan. 31, 2015 at Allen Fieldhouse. by Nick Krug

But he helps K-State get stops, pulls down 3.1 rebounds and ranks second on the team to Jevon Thomas with 2.3 assists a game in the conference.

In two of his more recent games — vs. Oklahoma and at TCU — Iwundu grabbed a combined 8 offensive rebounds. He also had 2 steals as K-State upset OU.

— hoop-math.com update: Of Iwundu’s 133 shot attempts, he only has made 17 away from the rim. So, yeah. KU won’t mind if he settles for jumpers. 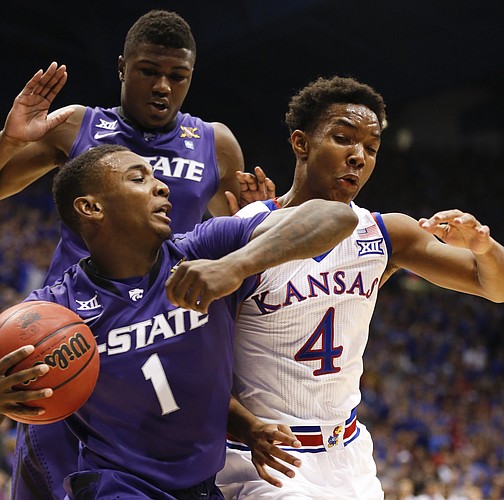 The Jayhawks completely shut him down a few weeks ago, but that’s kind of the way things go for Thomas, who hasn’t topped 6 points once in Big 12 play.

At least he leads the Wildcats with 17 steals in 15 games and averages 3.0 assists.

He actually netted his personal Big 12-high of 6 points at Baylor by shooting 3-for-4.

Thomas hasn’t made a 3-pointer since Jan. 27 against West Virginia.

He’s only played in seven Big 12 games for K-State, but he started the last one, in place of Marcus Foster, who often moves back and forth between inside and outside of Weber’s dog house.

He went scoreless in 18 minutes at BU, but has come through with a couple of explosive outings: 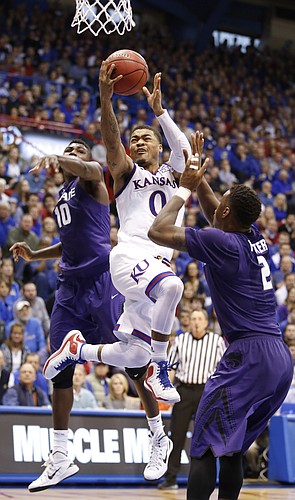 Kansas guard Frank Mason III (0) squeezes in for a bucket against Kansas State guard Malek Harris (10) and guard Marcus Foster (2) during the second half on Saturday, Jan. 31, 2015 at Allen Fieldhouse. by Nick Krug

Will Weber really bring Foster off the bench again? Or will he start the most dynamic player on the roster and ride him in hopes of a marquee win?

Foster played 29 minutes — second-most on the team — in the loss at Baylor, scoring 8 points on 3-for-11 shooting. He missed all 5 of his 3-pointers.

Playing in just 12 conference games and starting only 7, the at-times explosive shooting guard averages 12.8 points in the conference, but has hit just 36.6% of his shots in the league. He’s even worse from 3-point range, connecting on 19 of 68 (27.9%).

Foster has come off the bench in each of his last 3 appearances after being held out of 3 straight games. He had scored 11 or more points in 9 straight games before shooting just 4-for-17 combined in his last 2 appearances. 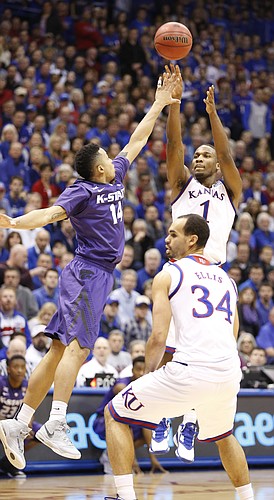 Kansas guard Wayne Selden Jr. (1) pulls up for a three pointer against Kansas State guard Justin Edwards (14) during the first half on Saturday, Jan. 31, 2015 at Allen Fieldhouse. by Nick Krug

His best recent performance came almost two weeks ago, at West Virginia. In 29 minutes off the bench, Edwards shot 5-for-7, hit both of his 3-pointers and scored 14 points. 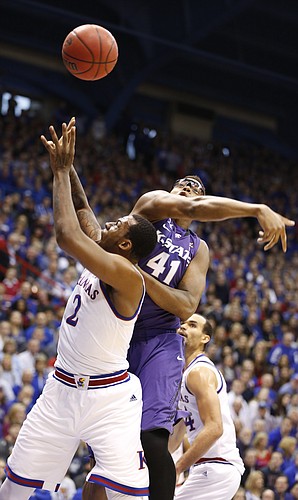 Kansas forward Cliff Alexander (2) battles to get off a shot against Kansas State forward Stephen Hurt (41) during the first half on Saturday, Jan. 31, 2015 at Allen Fieldhouse. by Nick Krug

You really have to take note of every big body an opponent can throw at Kansas, because the Jayhawks have had so many issues on the offensive glass and finishing against size.

Plus, when you consider Hurt caught KU bigs off guard in the first meeting by knocking down a pair of 3-pointers, he seems even more important to what K-State is trying to accomplish.

Is the Octagon of Gloom really famous - outside of Manhattan?