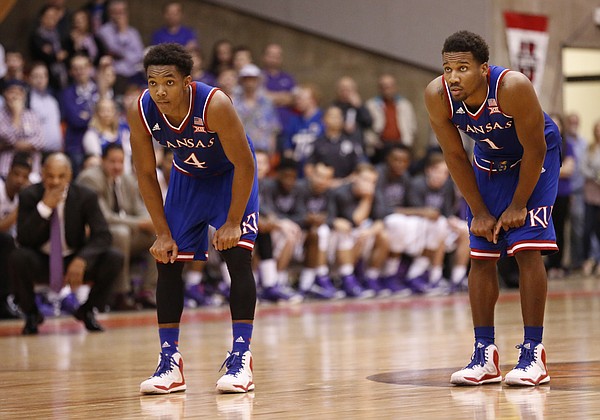 The last time Bill Self’s Kansas basketball team faced TCU, the Jayhawks had to win ugly, 64-61, in Fort Worth, Texas, a few weeks back.

The Allen Fieldhouse atmosphere on Saturday afternoon figures to make the rematch with the Horned Frogs (16-10 overall, 3-10 Big 12) a little easier for No. 8-ranked KU (21-5, 10-3), but TCU has been up to its muddying, defensive ways this past week, with home victories over Oklahoma State and Kansas State — both held to 55 points.

The Horned Frogs kept the Wildcats without a field goal in the final 9:42 of the first half Wednesday night, limiting K-State to 15 first-half points. A few days earlier, the Cowboys only connected on 3 of 16 3-pointers.

TCU’s offense has come around in its back-to-back wins, as well. The Horned Frogs shot 52.7% combined against OSU and K-State — pretty good for a team shooting 39.3% in Big 12 play.

All season, the Frogs have taken advantage of the offensive glass. TCU averages 13.3 offensive rebounds a game in the Big 12 (third, behind West Virginia and Baylor), and has racked up more offensive boards than its opponent in each of its last eight games: vs. Kansas, West Virginia, Iowa State, Baylor, Oklahoma, Texas, Oklahoma State and K-State.

You might recall the Frogs gathered a season-high 26 offensive rebounds against Kansas.

Statistically, TCU has more success in these scenarios:

Now, as a refresher, here are the TCU players the Jayhawks have to worry about as they try to get one win closer to an 11th straight Big 12 championship. 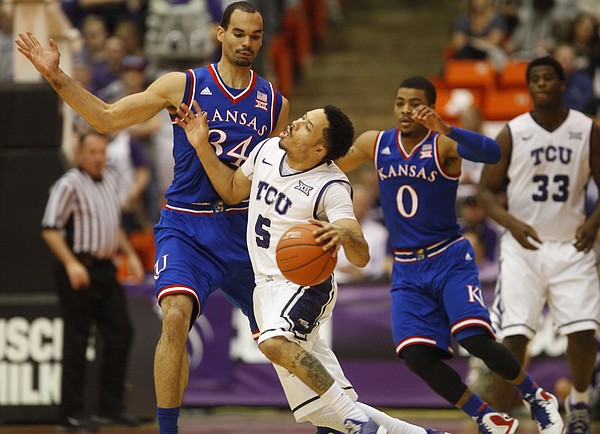 Kansas forward Perry Ellis (34) fouls TCU Horned Frogs guard Kyan Anderson (5) on a drive around the perimeter during the first half at Wilkerson-Greines Activity Center on Wednesday, Jan. 28, 2015 in Fort Worth, Texas. by Nick Krug

Often, Anderson makes it his personal mission to get TCU easy points at the free-throw line, where he has hit 50 of 60 tries in conference play.

But he doesn’t forget about his teammates. The point guard has 5 or more assists in 5 of his last 6 games. In his four years, TCU is 22-17 when he dishes 5 or more.

— hoop-math.com update: While the rest of Anderson’s teammates don’t shoot the ball from deep too often, he more than makes up for it, taking 49% of his shots from 3-point range. 69.2% of his 3-point makes have been assisted.

Eight times this season in Big 12 games, including against KU, the athletic guard has scored in double figures. He averages 9.8 points in conference while shooting 44.4% from the field.

Not a guard who spends a lot of time on the perimeter, Zeigler has missed each of his 5 3-point attempts in league games. But he does have 21 offensive rebounds in conference.

He put up a season-high 19 points at K-State back in early January. But in his past four games, three have resulted in single-digit scoring. He did go for 13 points while making all 5 shot attempts last weekend vs. OSU. 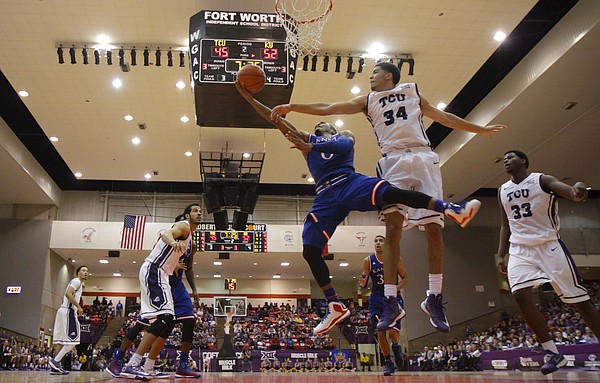 Kansas guard Frank Mason III (0) gets to the bucket against TCU Horned Frogs forward Kenrich Williams (34) during the second half at Wilkerson-Greines Activity Center on Wednesday, Jan. 28, 2015 in Fort Worth, Texas. by Nick Krug

Just to reiterate: He had SEVEN offensive rebounds vs. KU a few weeks ago. Don’t think for a second the Jayhawks haven’t heard that number constantly at practices this week.

Williams has 39 offensive rebounds in Big 12 games, which leads the Frogs, and he averages a team-best 6.6 boards in conference.

Williams’ scoring is on an uptick, with double-digit performances in 6 of his last 9 games.

He’s a guy coach Trent Johnson likes to have on the floor almost as much as Anderson.

— hoop-math.com update: Here’s another Horned Frog who knows where he needs to be shooting. Williams takes 56.6% of his shots at the rim and makes 61.7% at that distance. 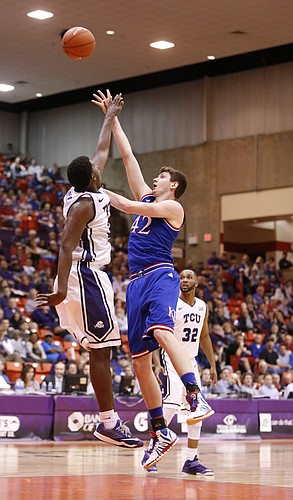 Kansas forward Hunter Mickelson (42) turns for a shot over TCU Horned Frogs forward Chris Washburn during the first half at Wilkerson-Greines Activity Center on Wednesday, Jan. 28, 2015 in Fort Worth, Texas. by Nick Krug

Making just 36.7% of his shots in league games, while averaging 6.0 points and 5.6 rebounds, Washburn turned in one of his better performances of the year in helping TCU beat K-State.

The big man put up a career-high 17 points, went 9-for-13 at the free-throw line and had a team-leading 8 rebounds.

Washburn has 24 offensive rebounds in conference play, but had just 1 in each of his last 2 games.

The 5 offensive boards he corralled against KU are his season-high. 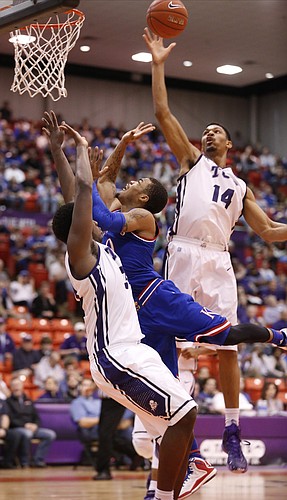 Kansas guard Frank Mason III (0) has a shot blocker by TCU Horned Frogs center Karviar Shepherd (14) during the first half at Wilkerson-Greines Activity Center on Wednesday, Jan. 28, 2015 in Fort Worth, Texas. by Nick Krug

Projected as a skilled big man out of high school, when Kansas rerouted him, Shepherd has been far from great offensively this season.

— hoop-math.com update: The majority of his shots — 65.1% — have come on 2-point jumpers, and Shepherd has made only 37 of 99 (37.4%). He is taking an even higher rate of his shots in this range since the last time playing KU, but is making them at nearly the exact same clip. 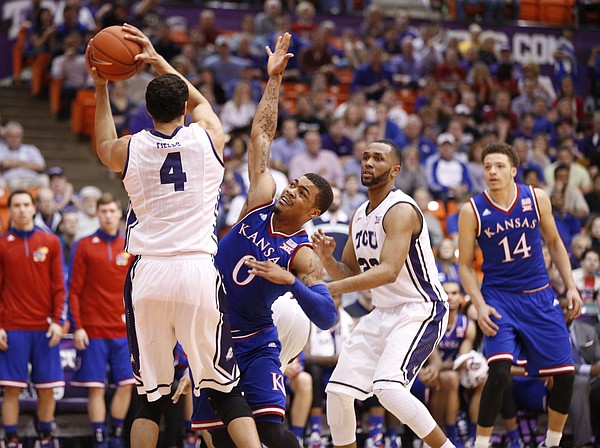 But Fields is another Frog who has looked atrocious at the charity stripe (13-for-35) in conference play.

Like Shepherd, he is coming off back-to-back double-digit scoring efforts: 12 vs. OSU and 10 vs. K-State.

Fields even hit 2 of 3 from 3-point land against the Wildcats, a surprising number, considering he has only made 9 of 26 from deep all season long.

— hoop-math.com update: Fields is actually the team’s most effective shooter. His eFG% of 57.2% leads the team. 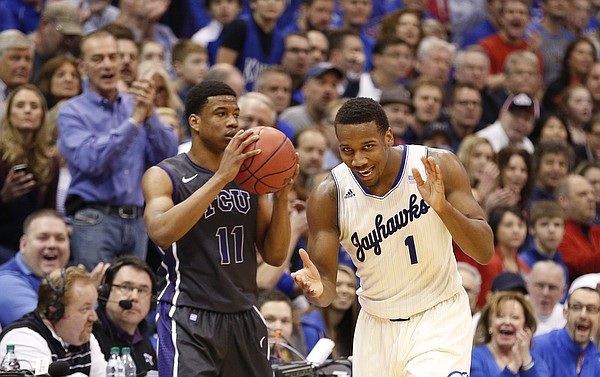 Kansas guard Wayne Selden celebrates after forcing a five-second call against TCU forward Brandon Parrish during the second half on Saturday, Feb. 15, 2014 at Allen Fieldhouse. by Nick Krug

In limited minutes, Parrish averages just 4.6 points in the conference, but is the team’s second-best 3-point threat — not that that’s saying much — with 9 makes on 28 attempts (32.1%) in Big 12 games.

Three weeks ago, he made 3 of 5 from behind the arc at Iowa State and scored 11 points — his first double-digit outing since the Big 12 opener.

Definitely not a gimme. Are any?

Not in this league. We def can't look past this team to the KSU game. We really need Texas to beat ISU today because I don't think we are done losing this season. I'm nervous our 11th Straight Big 12 title will come down to us playing Oklahoma in Norman because that will be one tough game for us. We need to be at least two games up and a Texas win today would do that for us. I'd hate to see ISU win the regular season title. UGH.