Getting to know No. 23 West Virginia 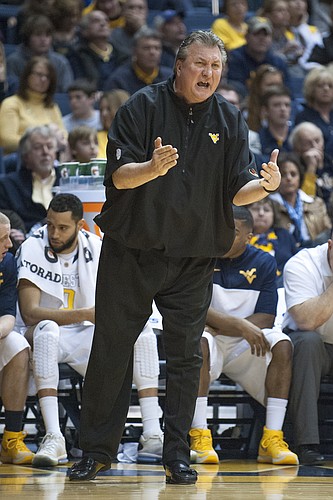 With less than three weeks left in the regular season and just six games remaining before its time for the Big 12 Tournament, Bill Self’s Kansas basketball team already has defeated eight league opponents.

Winning at WVU Coliseum, of course, is more easily typed or read than executed on the court. West Virginia plays a brand of pressure defense that is unique to the Big 12, and the Mountaineers have Bob Huggins, the third-winningest active Division I coach (759-306 career record) — behind just Mike Krzyzewski and Jim Boeheim — barking out orders from the sideline.

In Big 12 play, No. 23-ranked West Virginia leads the league in:

On the season, the Mountaineers also lead the nation in those same categories: 12.0 steals, +8.4 turnover margin, 16.9 offensive boards.

Basically, between second chances and takeaways, the Mountaineers, who have lost three of their last four, win games by making sure they take more field goal attempts than their foes. Through 12 conference games, WVU averages 61.5 shot attempts a game. Their opponents? How about 47.2?

League opponents are shooting more free throws than West Virginia, but the difference isn’t exactly alarming: WVU takes 25.6 a game at the foul line, and their opposition takes 32.2 a game.

If the No. 8-ranked Jayhawks can break the press and break 70 points, they should be in good shape. The Mountaineers are 16-0 this season when holding opponents to 69 or fewer points.

Let’s meet the Mountaineers the Jayhawks have to worry about in Morgantown, West Virginia. 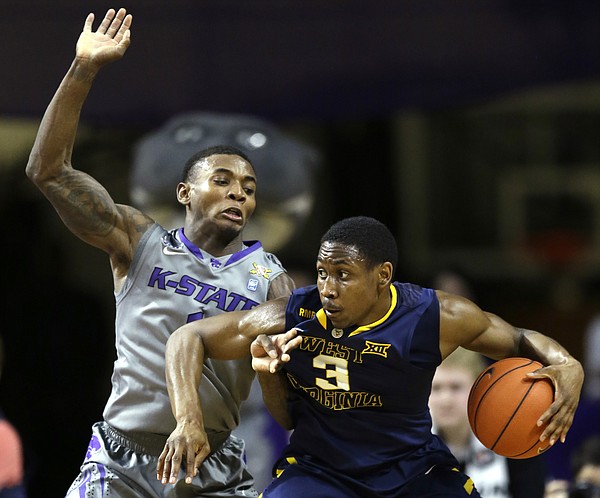 The Big 12’s preseason Player of the Year might not beat out Oklahoma’s Buddy Hield for the postseason version of that award, but the dynamic veteran guard averages 12.2 points and 5.0 assists in conference play, while shooting 38.5% from the floor. He has made just 7 3-pointers on 22 attempts in league games.

While he attacks aggressively, and has taken 74 free throws in Big 12 games, he is only making 58.1% at the foul line.

Staten has scored in double figures 21 times this season to lead WVU, and has produced 20 points or more on four occasions.

He can be stopped, though. Baylor held him to 6 points, Texas only let him get 3 and Oklahoma limited him to 4. The Sooners were the only team to lose to WVU in those instances.

Staten has 8 steals in league play and 27 on the season.

— hoop-matth.com nugget: Look for Staten to go one-on-one and take 2-point jump shots. 50% of his attempts on the season qualify as such, and while he connects on 41.9% of them, only 9 of his 57 makes has come via a teammate’s assist.

With 70 offensive rebounds this season, Williams helps WVU set the tone on the glass.

He averages 2.9 offensive boards a game in Big 12 play, and puts up 12.4 points against conference competition. His 9.5 rebounds a game in the league ranks second to Baylor’s Rico Gathers (13.1). Plus, Williams converts on 49.5% of his looks, which ranks him third in the Big 12.

He has four double-doubles in conference so far.

— hoop-math.com nugget: Given his size and rebounding ability, it’s surprising that Williams only takes 46.9% of his shots at the rim. His 30 put-backs on the offensive glass tie him for the team lead.

His 65 offensive rebounds are second on the team.

So although Holton only averages 5.1 points in Big 12 action, watch out for him on the glass, where he pulls down 4.4 boards.

The transfer who began his career at Rhode Island sat out last season. Holton hasn’t scored more that 4 points in any of his previous 4 games, but he did have 8 rebounds at Oklahoma and 6 boards vs. Baylor in that span.

The forward has racked up 34 steals this season, with 12 coming in Big 12 action.

— hoop-math.com nugget: More than any of his teammates, Holton operates at the rim, where he takes 64.2% of his shots and makes 61.3% of those looks. Like Williams, he has 30 put-backs via the offensive glass. 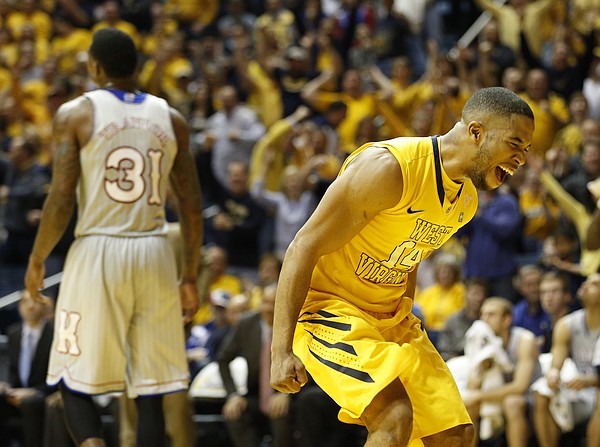 West Virginia guard Gary Browne celebrates a foul by the Jayhawks late in the second half on Saturday, March 8, 2014 at WVU Coliseum in Morgantown, West Virginia. by Nick Krug

WVU isn’t a very good 3-point shooting team, as proven by Browne’s 12 3-pointers in Big 12 play (on 38 attempts no less) leading the starters.

The team captain had 12 points and 6 rebounds at Oklahoma. But he went scoreless vs. Baylor before bouncing back with 8 points in each of his last 2 games.

The senior guard has 10 steals in league games and 30 overall.

— hoop-math.com nugget: More likely to shoot jumpers than attack the rim, Browne makes 38.9% of his 2-point jumpers — the range where 27.5% of his attempts comes from.

Four times in league games, the first-year guard has scored double figures: at Texas Tech, vs. TCU, vs. TT and vs. Baylor.

A freshman who has started every game, he has 30 of WVU’s steals, with 14 of those coming in the Big 12.

— hoop-math.com nugget: Only 13.5% of his shot attempts have been 2-point jumpers. He only shoots 19% from that range, and rightfully prefers scoring at the rim or taking 3-pointers.

Watch out for this young stud off the WVU bench.

TCU lost track of him in the final seconds of overtime and it cost the Horned Frogs dearly when he drew a foul and hit the game-winning free throws.

Wreaker of havoc on the defensive end of the floor, Carter has swiped 24 takeaways in Big 12 play alone. On the season, the 6-2 thief has 48.

He had a personal best 6 steals at TCU in his Big 12 debut. In the league, only K-State has faced Carter and kept him from getting at least one takeaway.

— hoop-math.com nugget: Third on WVU in FG attempts, most of those come from 3-point range (55.9%), but Carter also finds his way to the paint, where he converts 59.3% of his shots at the rim.

He scored personal Big 12-highs with 10 points apiece against TCU, ISU and K-State.

— hoop-math.com nugget: A catch-and-shoot guy, each of Paige’s 3-point makes this season has come off an assist.

Part of that shooting differential has to be the number of steals eliminating opponent shots and resulting in transition shots for WVU.

I think our guys know about WVU's defensive pressure. There is a way to overcome that. We need to get the ball inbounds quickly and everyone needs to be in their spots and ready to cut to the open spot. We need pass quickly and break down the pressure and make WVU pay for the full court pressure. Baylor did that a little over a week ago and won big in Morgantown.

Our guys are going to have to move in the half court and not allow WVU easy chances to get the doubles in the corners. If our guy sees it coming, find a guy quickly and get them while they're moving in the wrong direction. Keep the ball moving with sharp passes and nothing lazy.

Also, WVU doesn't score well in the half court, and we're going to have to lock that down and not let them get second chances. Block out. Push the ball up the floor. WVU is quick and fast, but that won't matter if we break the press and get some numbers advantages while playing with pace. We're as fast as they are, and we need to match their intensity tonight.