Kansas defense not living up to Bill Self's standards 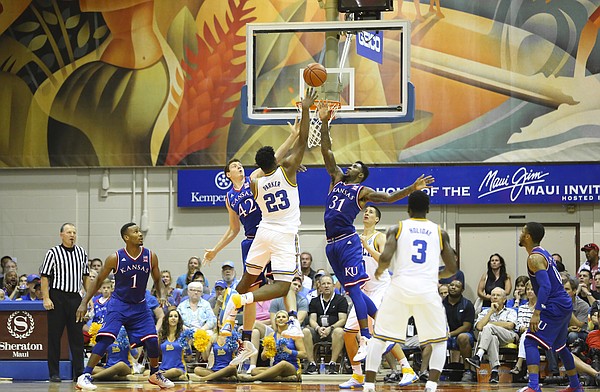 Kansas forward Jamari Traylor (31) and Kansas forward Hunter Mickelson (42) look to defend against a shot by UCLA forward Tony Parker (23) during the second half, Tuesday, Nov. 24, 2015 at Lahaina Civic Center in Lahaina, Hawaii. by Nick Krug

Nine games into the season, Bill Self has a theory about his team’s defense.

So far, Kansas is allowing its opponents to make 40.9% of their shot attempts. Self wants that number to be in the mid- to high-30s. And the 13th-year KU coach thinks this team might be a little bit better defensively if it wasn’t so good on the other end of the floor.

Self’s hypothesis goes something like this: KU is doing so well offensively (see: 90.0 points per game, shooting 52.2% from the field, making 46.9% from 3-point range), it knows points are going to come. As a result, the Jayhawks don’t try as hard on defense as they could — or should.

“When you know that you labor to score, you're not a percentage-shooting team, then you really hunker down and do certain things,” Self elaborated, “because you know you have to to win. And our guys in the back of their mind, they're thinking, we're going to score enough points to win — which so far for the most part has been true — but it's not the right mentality.”

Kansas (8-1, ranked No. 2 in the nation) isn’t a “lockdown” defensive team at this point, according to Self. But the coach thinks that field-goal percentage defense number could improve, because his players are still figuring things out on “D.” 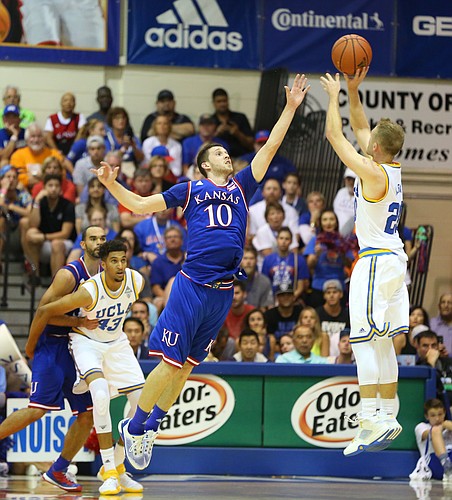 Kansas guard Sviatoslav Mykhailiuk (10) defends against a three from UCLA guard Bryce Alford (20) during the first half, Tuesday, Nov. 24, 2015 at Lahaina Civic Center in Lahaina, Hawaii. by Nick Krug

Self said KU’s coaches are trying to change the Jayhawks’ mentality and get it to where they’d be upset if their opponent got a quality shot attempt — whether the ball fell through the net or not.

Since Self took over the program before the 2003-04 campaign, KU has finished the year holding opponents below 40% shooting in every season but one. In 2013-14, KU foes hit 41.6% of their shot attempts, and the Jayhawks lost to Stanford in the NCAA Tournament’s Round of 32, with injured big man Joel Embiid unavailable.

The 2008 national championship team limited opponents to 37.9% shooting. KU’s 2012 national runner-up nearly duplicated that mark, at 38%. And when Self theorizes about not-so-great offensive teams playing better defense, he likely has that 2012 team in mind. The Thomas Robinson-led Jayhawks only averaged 73.5 points per game that season and shot 47.2% from the field.

Still, Self says KU isn’t good enough on defense yet to “compete at the highest level.” And if there’s one deficiency holding Kansas back, it’s the absence of a consistent interior shot-blocker/intimidator. 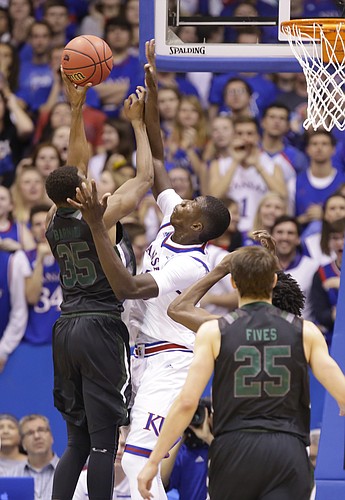 “We've got to figure out a way to put up a little bit more resistance inside and have better shot blockers,” Self said.

KU is averaging 4.2 blocks per game. Of the team’s 38 total blocks, 13 have come from senior Hunter Mickelson and 6 have come from freshman Cheick Diallo (in just 4 appearances). The next best shot swatter is junior guard Wayne Selden Jr., with 5.

“Although we're blocking a decent number,” Self said, “you take Hunter and Cheick out of there, there's nobody blocking any shots.”

And Self isn’t even demanding every other front court player — Perry Ellis, Landen Lucas, Jamari Traylor and Carlton Bragg — start protecting the rim. He said they don’t have to block shots to make KU’s interior defense better.

“If you're not a shot-blocking team,” he said, “then you should at least be an activity team, and we've got some big guys that are really not doing either one.” 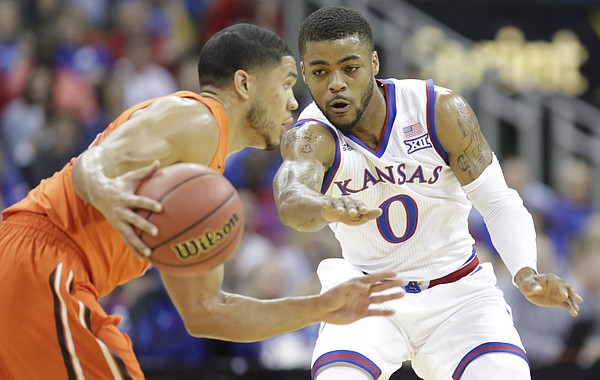 For KU, far more activity has generated on the perimeter. Sophomore point guard Devonté Graham leads the team with 20 steals and fellow PG Frank Mason III, a junior, has registered 18 swipes. KU’s 8.4 steals per game rank 32nd in the country.

But so far this season, only Mickelson, Diallo, Graham and Mason have shown consistent ability to create havoc defensively. Steals and blocks not only mean empty possessions for opponents, they also tend to get KU’s fast-paced attack out and running, fueling momentum for Kansas while demoralizing whomever just came up empty-handed.

Until more Jayhawks start taking on active defensive roles, too, Kansas won’t reach its defensive ceiling, and that field-goal percentage defense number won’t be as low as Self wants it.

There will be some games where the shots are not falling. We better be solid defensively if we expect to win those games. And when we get to the better teams, we're going to have to both score at a high level and hold them down defensively or scoring will not be enough. The Kentucky game and several Big12 games come to mind. If we don't get this defensive mindset and defensive performance on track then this might be the year our Big12 domination ends.

As they say, defense travels.

I believe that this team will get to the lock-down level Self wants. Diallo and Bragg should continue to develop defensively, and I believe that Svi has something to offer on D, though he needs to start showing it.

Looks like we are seeing the same things. Athletic enough on the perimeter and getting experienced inside. May be better next year.

Self is basically a defensive-oriented coach. His offense is usually cartoonish until February but Self requires individuals and the team -collectively - to put forth maximum effort and to function as a well-oiled machine right out of the gate.

So if interior defense is key … let's see more minutes for Mickelson and Diallo!

Another couple of things that will bite us. Free throws and rebounding.

If we are not hitting shots or someone, like WVU, OU, Baylor and ISU, is hitting as many as we do.

If teams like these and Texas can get put back after put back and we are miss one and get back on defense then the same result.

Margins are tighter and so are sphincters and in a close one anything can happen. MSU, Harvard. Makes us stronger, I guess.

Some real good offensive players in this conference and we, I emphasize, get everyone's best shot every time.

ISU may dog it against OU or Texas but not against us. We dog it from time to time also.

I don't know about the psyche effect of good offense on defense but we can negate that with rebounding and free throw shooting.

I want every darn game to be easy and stress free. TGIF!

The unlimited practice over winter break should really help this team tie up the loose ends. We need to play like we played against Vanderbilt. Every game.

Its not all gloom and doom, but this team needs more focus on a few areas.