'That's what's up': Ben Heeney goes for 8 tackles and sack in Raiders debut 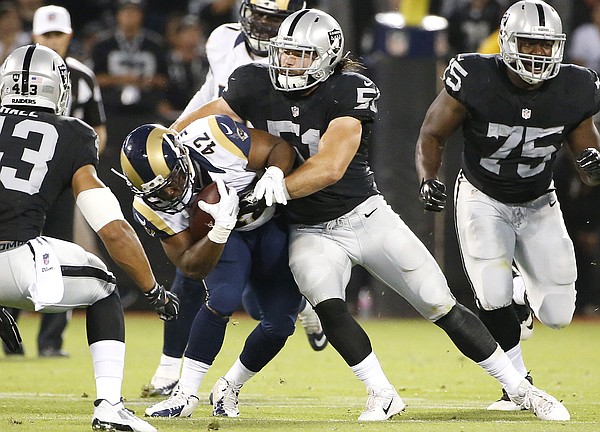 It wasn’t the regular season, so none of the stats count and everything that transpired will soon only register as footnote-worthy, but former Kansas linebacker Ben Heeney looked like he’ll fit in at the NFL level just fine in his preseason debut Friday night.

Heeney led Oakland with eight tackles in the Raiders’ 18-3 victory over St. Louis, and even picked up a sack by chasing Rams quarterback Case Keenum out of bounds for a short loss early in the second quarter.

“That counted as a sack?” Heeney asked a reporter in a story posted on the Raiders’ website.

Raiders coach Jack Del Rio left the exhibition impressed with his fifth-round pick from KU. In a CSNBayArea.com report, Del Rio said Heeney flies around at practices the same way he did in his unofficial Oakland opener.

“He’s very, very active. His speed showed up,” Del Rio said. “I know that one time the quarterback tried to break contain and he laid him down for a sack. That was his speed. That’s one of the reasons we have him.”

Heeney told CSNBayArea.com’s Scott Bayer hustling and getting dirty is in his football DNA. He just doesn’t know any other way of playing the game.

“That’s what I’ve staked my game on,” Heeney said.

The rookie from Kansas hoped to take his stained, game-worn jersey home with him after his successful night, but the Raiders’ equipment personnel told him he couldn’t, because that was the only black, No. 51 Heeney jersey they had available at the moment.

“I definitely want to get it back once they get the next jersey made,” Heeney said. “I wish they wouldn’t wash it, but I guess it has to look good for next game.”

The defensive play-calling and in-game adjustments made his first NFL game feel a lot different than his college days, Heeney said, but he thought he handled it pretty well. Moving forward, the 6-foot linebacker from Hutchinson just wants to make sure he attacks more.

“There were a couple of plays I could have shot a gap and got a tackle for loss that I didn’t do, but I think for the most part I’m happy with my performance,” Heeney said. “I have a couple of things I need to clean up.”

Thanks to Naveed Chowdhury of Cover32.com, we can watch every defensive snap Heeney played on Friday night.

Along with his eight tackles and one sack, Heeney read one pass over the middle well enough to either disrupt the intended receiver or deflect the ball (it was hard to tell on the video whether he got a finger on it). It was just another example of how the former KU star can begin making an impact immediately for Oakland this season.

As Heeney posted on Instagram following his first preseason game in silver and black, the NFL is finally a reality for him: “No more dreaming, just living!”

I would expect nothing else from Ben. I've always hated the Raiders but now I have to at least root for them when he's in there.

Such a shame he didn't get to experience better KU teams.

I know it is still a business, but Jack Del Rio being a former linebacker who played much the same way can't hurt his chances of sticking. Sounds like a great special team guy to start and then who knows. I tad short for the NFL as a starter, but nickel and dime packages could be the ticket with his speed. Stay healthy, Ben.