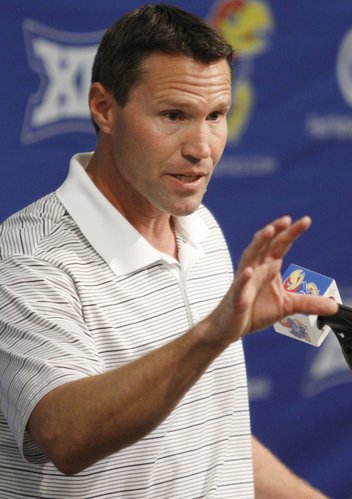 Bowen started off by talking about the great challenge and opportunity that awaits KU (2-2 overall, 0-1 Big 12) this Saturday at West Virginia (2-2, 0-1) before getting into the big-picture changes he hopes to make and many other topics.

Here are some of the highlights from the defensive coordinator-turned-head coach:

• KU beat West Virginia last season, and that should play some kind of a factor this week. There are guys on both teams that played significant roles in that one who will be back on the field this time around. Dexter McDonald was out there for that Kansas win. “It’s the same show.”

• The interim coach, when asked, admitted the Jayhawks are a bit of an unknown now, because Charlie Weis is gone and things will be different. Bowen isn’t going anywhere close to changing everything, but there will be changes on offense, defense and special teams. The goal is to be creative and set the players up to win.

• Sophomore quarterback Montell Cozart shows up every day and puts in work, He has his teammates behind him. It’s not always going to be perfect, but he is KU’s quarterback. He is developing within a new offensive system and he is young.

• Senior middle linebacker Ben Heeney is not a throwback linebacker. People don’t give him enough credit for how fast he flies around the field defending modern spread offenses. He can really run. Heeney is one of the better LBs KU has had in Bowen’s years around the program.

• Junior offensive lineman Larry Mazyck is now KU’s starting right tackle. John Reagan works with the O-line and the guys who are starting are the ones he feels comfortable with.

• As a defensive guy, Bowen used to not give one second of thought to KU’s offense. Now that he is overseeing the entire program, he will lean on offensive coordinator John Reagan. Bowen trusts Reagan and the team’s leading offensive mind feels good about the plan for this week. The two of them have had some good converseations.

• The coaches have talked about and given considerable thought to the team’s game-day approach and game management and how those can be tweaked for the better. Bowen will keep calling the defense, so they have laid out plans to help situations where timeouts and clock management come into play.

• The players have a noticeable spirit about their work the past few days. On Tuesday morning “it was rockin’ in the weight room.” The Jayhawks are excited right now, and that shows up on the practice fields, too. Tuesday, the coaches were around the players early for lift groups, because Bowen thinks it’s important to be down there with them.

• Bowen reiterated that he thinks the KU football program is a sleeping giant.

• College football recruiting is a highly competitive realm. KU has some commitments they feel good about. Bowen will remind those recruits about all the good things KU has to offer because he obviously doesn’t want the program to lose any recruits just because Weis has left. They’ll keep their eyes open on adding to the recruiting pool, too.

• Bowen wants the players to have a clean start. Sometimes players get put in roles that are deserved but that isn’t always the case. Bowen has an open mind about giving players chances to contribute and players will have those chances, beginning at Tuesday’s practice. Special teams are going to be competitive at practice because of that.

• Louie Matsakis’ new role as special teams coordinator won’t be the only different look to that phase of the game. Bowen wants first-line guys on special teams. Each KU player needs to do everything in his power to help the product on the field. Young guys will get a shot to contribute on special teams, too. Matsakis has been in this conference before, and when Bowen left his meeting with the former Mark Mangino staffer at KU, he was blown away by his preparation and what he had in store.

• Having coaching veteran Dave Campo on staff comforts Bowen. Campo’s years of experience in college football and the NFL make him a great source. Campo has answers for Bowen when he needs them.

• The team’s offensive identity has to start with the personnel and the players’ abilities. There are some great offensive minds in the game right now, and Reagan falls in that category.

• When you play on the road, every aspect of the game and your approach has to sharpen. The Jayhawks have to embrace that the crowd is against them and have mental toughness.

John Reagan on working with Clint Bowen by Benton Smith

All white this week?

BLUE HELMETS PLEASE. for the love of Fambrough, wear those gorgeous blue helmets!

It all sounds good. Glad to have a restart to this season. Hope to see our talent put to good use.

KU has been in a really tough spot (BigXII) to generate any success since the October when Lew Perkins destroyed all cohesion between coaches, players and fans.
The 28 games under Weiss made some real strides toward success, just not enough to show in the W column when the rest of the conference is so damned tough.
The biggest problem has been game-day preparation and execution. At least four or five chances for conference victories were squandered by Charlie's game management - centering too much on his own brilliance instead of making the most of what the players on the field can best be expected to handle.