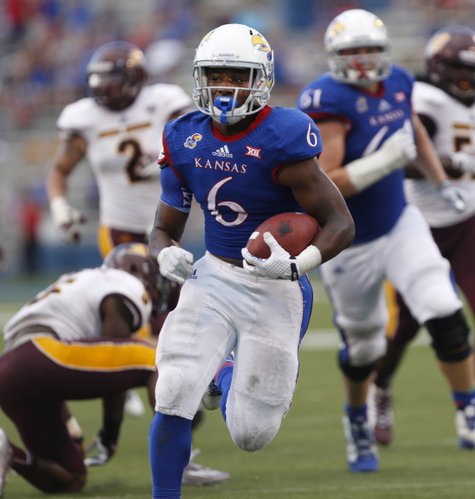 KU's final touchdown came from freshman running back Corey Avery (6) on Saturday September 20, 2014, at Memorial Stadium, as the Hawks came home the winner 24-10. by Richard Gwin

Few would question Kansas University’s offensive ideology for its third game of the season, against Central Michigan.

The Jayhawks — and sophomore quarterback Montell Cozart in particular — labored unsuccessfully to sustain drives and score touchdowns a week earlier at Duke. So coaches devised a game plan to get the young offensive leader back on track versus CMU, with short passes.

The strategy allowed Cozart to complete 23 of 33 throws for 226 yards, two touchdowns and an interception, and KU won, 24-10.

But there was a downside to that approach. Kansas running backs Corey Avery and De’Andre Mann, who had each rushed for at least 65 yards in both of KU’s previous games, combined for just 61 against the Chippewas.

While the game opened in explosive fashion with a 74-yard rushing TD by running-back-turned-receiver Tony Pierson, Avery and Mann only had two carries apiece in the first half, as KU coach Charlie Weis and offensive coordinator John Reagan focused on high-percentage passes that would help Cozart’s confidence.

When the Jayhawks open Big 12 play Saturday against Texas, even those quick-and-easy pass plays could get complicated.

So what better place than here/time than now to get the running backs involved? Cozart might not be perfect, but he knows healthy doses of Avery and Mann will help KU’s offense against the Longhorns (1-2).

“We get those guys going and then you get the defense starting to come up,” the second-year QB said. “And that’s when you hit ‘em with a play-action, go right over the top.”

Cozart said the Jayhawks (2-1) would love to exploit the UT defense and its physical front seven one way or another, and the team has confidence Avery, a true freshman, and Mann, a junior college transfer in his first season, can help make that happen. Both of them have produced at least one 10-plus yard carry each of the previous three games. 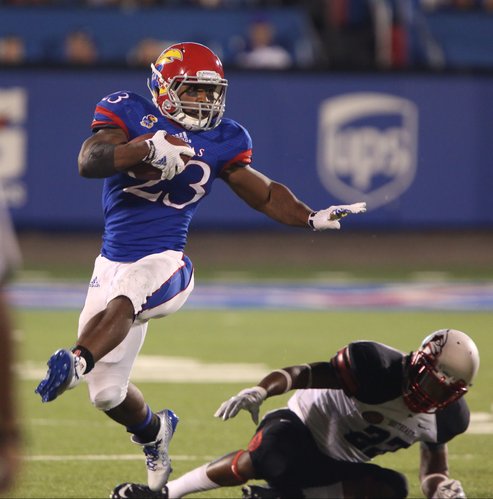 The QB compared Mann, a junior, to former Baylor RB Lache Seastrunk, who ran for 1,177 yards and 11 touchdowns last season.

Avery, Cozart added, is swift and shifty with the ball in his hands.

Both Avery and Mann are about to make their Big 12 debuts. Kansas senior tight end Jimmay Mundine said the new running backs won’t be able to out-athlete any of the Longhorns, so executing the game plan will be critical. But he also trusts their skills.

“Just because they’re young doesn’t mean they can’t make a guy miss or run over him or do their job,” Mundine said. “Obviously, we don’t expect them to be like (James) Sims was for us last year and things of that nature, but they’ll be solid players for us and ones that we can count on, regardless of how old they are.”

What’s more, Mundine said both Avery and Mann have the ability to run for power or speed.

“I think they kind of pick and choose. It just depends on the situation,” the tight end shared. “They’re both pretty smart running backs. If it’s third and one, they need to lower their head and get the first down, they’ll do that. If it’s second and four and they’ve got an opportunity to make somebody miss, they’ll go on about their business.”

Senior Kansas receiver Justin McCay takes a lot of pride in blocking on the perimeter. He said Avery and Mann are hard-working backs that probably get underestimated outside of the KU locker room.

“We know what they can do,” McCay said. “We expect a lot out of ’em, but people haven’t seen it yet.”

So what will the Big 12 find out about KU’s one-two punch?