With KU's depth and experience, Charlie Weis doesn't worry as much as he used to

Kansas University coach Charlie Weis hadn’t talked football in person with the media for a couple of weeks. So Tuesday’s press conference, leading up to the Jayhawks’ season-opener Saturday against Southeast Missouri State, had plenty of nuggets.

• Weis didn’t speak at length about it, but the biggest news to come out of the presser had to be the departure of junior defensive back Kevin Short. Listed as the second-string right corner on KU’s first preseason depth chart in early August, Weis said personal issues led to Short’s departure. He went out of his way to make it clear academics weren’t the issue. What’s more, Weis said there is a possibility Short, from Florissant, Missouri, could be back in January. And KU has known about the issue for a while: “This isn’t something that just hit yesterday.” 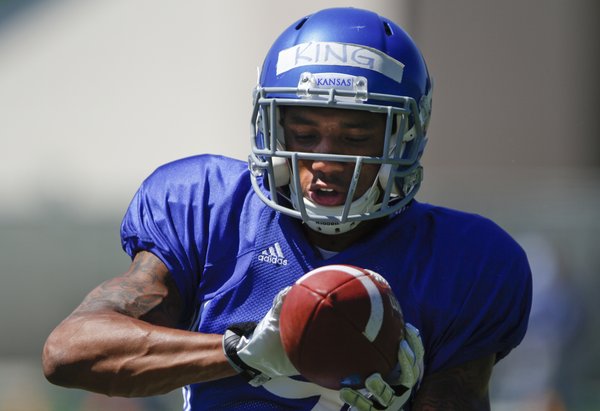 • Junior receiver Nigel King, a non-recruited player, is on scholarship and falls under the category of blue-shirting. He has two years to play two years. KU had room for him on its roster and he will be counted on next year’s recruiting class. He graduated from Maryland and is in graduate school at KU.

• Sophomore quarterback Montell Cozart has to be the most improved player from last season for KU to win more football games. Cozart now is confident, bordering on cocky. Weis said “that’s a good place to be,” and he didn’t see that last year from the QB as a true freshman.

• Defensively, there are so many players back. The secondary is rock solid. One player who could be a surprise is starting nickel Tevin Shaw, a sophomore. “We had to find a way to get him on the field,” Weis said.

• The battle for starting center “wasn’t close.” Weis said junior Keyon Haughton was clearly ahead of red-shirt freshman Joe Gibson, who has a lot of upside.

• After beginning preseason camp as a tight end, sophomore Jordan Shelley-Smith now sits at No. 2 on the depth chart at right tackle. “He’s eaten like a man possessed,” Weis said. “I’ve done that before.” 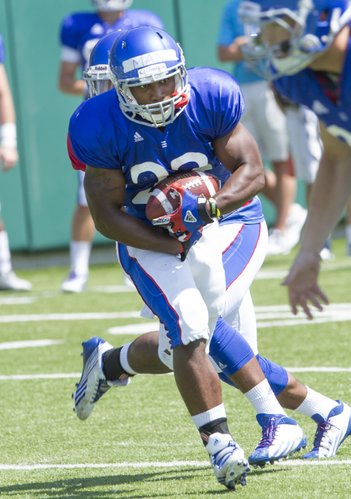 Kansas University junior running back De'Andre Mann (23) runs with the ball during football practice on Thursday August 14, 2014. by Richard Gwin

• Running backs De’Andre Mann and Corey Avery are co-No. 1s on the depth chart. A freshman, Avery is the better athlete. Mann, a junior, is the better football player. Mann’s body is ready to take Big 12 hits. “He’s just a rocked-up dude,” Weis said, adding he is confident in both players. “I’ll be surprised if they don’t play well.”

• Size isn’t relevant when it comes to pass-blocking as a running back. It’s about fundamentals, techniques, getting your hands on people and not getting beat around the edge. And that might be a moot point when No. 2 left tackle Larry Mayzck is in the game, he is so big.

• Freshman Joe Dineen, who recently moved to running back form safety, is ready to play. Dineen is technically No. 2 on the depth chart, because Mann and Avery are 1 and 1A. Dineen is clearly the next guy, and he’s ready.

• King will line up on the right side and the left side at receiver. He’s very close to bumping somebody who is ahead of him on the depth chart — he’s currently listed behind senior Tony Pierson.

• Senior tight end Jimmay Mundine only missed about a week and a half of preseason camp due to injury. KU’s coaches don’t have to overload him with reps too early because of that. … After Mundine on the TE depth chart, everybody brings something different. Red-shirt freshman Ben Johnson (No. 2) is more athletic. Senior Trent Smiley is stronger.

• Freshman Junior Visinia (6-foot-4, 360 pounds) opens the season as the No. 2 right guard. He’s a huge human being. Offensive line coach John Reagan is really high on him. 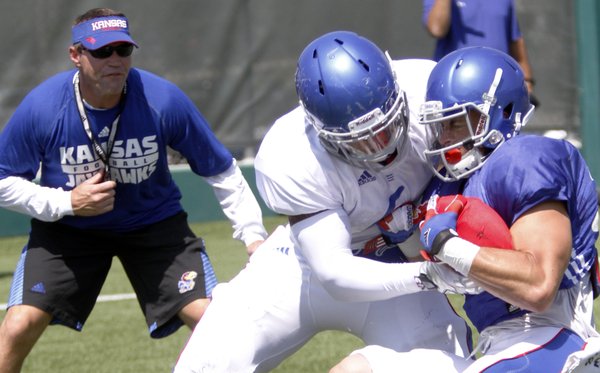 • KU has a lot of true freshmen on its Week 1 depth chart. Matthew Boateng (No. 2 right corner) has played great in camp. For a while, KU had him as a starting nickel. Everyone knew about linebacker Kyron Watson (No. 2 MLB) and Avery (No. 1 RB), but people might be surprised by Visinia and Boateng. Receivers Derrick Neal and Bobby Hartzog will both get on the field, too. “They don’t play like freshmen.” They will take care of some of KU’s return duties. Weis said any player on the depth chart will play in the opener.

• Starting right tackle Damon Martin got better throughout the spring, and preseason camp. Now he’s clearly the best RT on the O-line. Starting left guard Ngalu Fusimalohi, No. 1 right guard Mike Smithburg and Martin were the three best players on the unit “the whole way.”

• Last year, now No. 1 LT Pat Lewandowski didn’t have anywhere near the confidence he does now. He is the clear verbal leader of the O-line. KU didn’t get that at all from him last year. It’s not by chance that teammates put him on the leadership committee.

• Cozart has some experienced receivers to work with now, but his success starts with Reagan and quarterbacks coach Ron Powlus. … Harwell gets open and has the trust of his QB. KU hasn’t had that before either.

• On the defensive line … KU feels like it has seven or eight guys they can rotate in.

• Like any coach, Weis has some areas of concern, but there were so many issues in his two previous seasons. Now they’re worrying about fewer things. There are still restless nights, just less of them. Last year this time, Weis wondered if the passing game even had a chance. … The QB position has been the biggest nightmare over the past few years, regarding what to expect out of the position.

• If KU’s offense can score enough points, the Jayhawks will have a chance to win a whole lot of games, because the defense is salty.

• Cozart not only has the most athleticism of KU’s quarterbacks, he also has the most accuracy. The offense fits No. 2 QB Michael Cummings very well, too. The junior still has a cannon for an arm.

— Listen to everything Weis had to say at the press conference: Charlie Weis on Kevin Short's departure, KU's opener

— And hear from John Reagan and Clint Bowen, who also met with the media: Coordinators talk KU's development heading into opener

"Cozart not only has the most athleticism of KU’s quarterbacks, he also has the most accuracy." I do hope that it is true... otherwise it will be a looong season.

I certainly hope he's improved a lot since last year then - and not just to flip a coin completion levels.