So much for a boring Friday afternoon press conference to ease everyone in to the first exhibition of Kansas University’s men’s basketball season.

Bill Self, the plan was, would come in and talk about some big-picture themes for the Jayhawks, who play host to Washburn Monday at 7 p.m.

Instead, Self learned Thursday freshman guard Conner Frankamp will transfer from the program at the semester’s end — as first reported by KUsports.com's Gary Bedore. 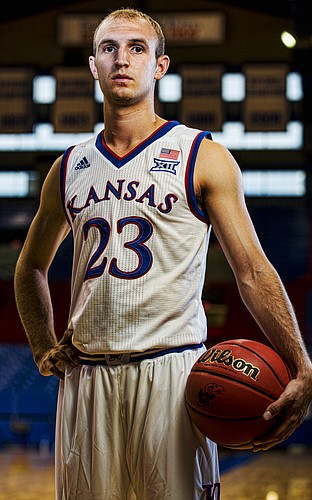 Sophomore guard Conner Frankamp poses for a photograph during the 2014 men's basketball media day at Allen Fieldhouse on Thursday, Oct. 2, 2014. by John Young

• Conner Frankamp and his father requested a meeting on Wednesday and Self met with him that afternoon before practice. Frankamp came the next day to tell Self he would be leaving KU at the end of this semester.

• Frankamp will not play or be a part of the team the next couple of months. He’ll continue receiving academic assistance and will make a decision on where he will attend in the spring semester.

• This wasn’t something KU wanted to happen. They anticipated him playing a much larger role this year. This early in the season, you still have to determine what role everyone will have but Frankamp was going to be in the rotation and playing significant minutes.

• Frankamp just decided it was in his best interest to transfer. There were reasons Self is sure were very valid to Frankamp and his family.

• Frankamp should become eligible to play at his next school as soon as the fall 2015 semester concludes there. The family told Self he doesn’t want to sit all of 2015-16, which would have given him three complete years of eligibility.

• Somebody was going to get left out. KU had seven good perimeter players with Frankamp. There hasn’t been a lot of separation, like you hope for, at practices so far. Self thought they still needed to find out which five of the seven perimeter players were going to be the best options for the rotation.

• Frankamp definitely would have been in the top five guards, as of today. But they don’t know how Kelly Oubre and Devonté Graham are going to develop and things like that.

• KU lost “a good player,” “a fine young man” and “a very good shooter” with this move. But the Jayhawks might be more locked in and able to figure out what their role will be now.

• Graham is going to be a player who will challenge for a starting spot at PG. He might not be quite ready for that yet. He will be in the mix at point guard, and he is KU's purest point. Frank Mason is a scoring point and Frankamp was a shooting point. But neither Mason nor Frankamp were pure points.

• Mason understands the game a little better now that he’s a sophomore. He probably feels a little more freedom and isn’t thinking as much. Mason is aggressive. He puts pressure on people.

• Selden feels like this is his team more than anybody else’s. That is a good thing. Last year he was fitting in and now he’s taking more of a leadership role.

• KU only has 11 players on scholarship right now. But Kansas has 11 good players still. Self hopes everyone will get minutes in the exhibition vs. Washburn so the coaches can look at different combinations. That’s the goal.

• There are a lot of times when coaches think they’re really deep and once the games come they realize they are better off if certain players stay in a lot longer. He doesn’t know how it will play out. He predicts eight guys will play the majority of the minutes.

• This could be the deepest team Self has had at KU. The ninth, 10th and 11th players for Kansas right now are better than guys in those slots in the past. Kansas just isn’t top-heavy with nationally acclaimed players.

• Now that Kansas has six perimeter guys, there will be times when Selden or Oubre will play inside. All six guards will have ample time to play.

• Self had a starting five for Monday’s exhibition. Frankamp would’ve started. But as of Friday afternoon he hadn’t decided on the starting five versus Washburn.

— Listen to everything Self had to say at his press conference: Bill Self discusses Conner Frankamp's decision to transfer from Kansas

Don't you have a proof reader or an editor who reads through your story before it's posted? This is atrocious!

"KU is the purest point..." Who? "That's a god thing" What? Dude, read it before you submit it for publishing!

This is a blog, not an article for the print edition of the LJWorld. It's an instant reaction update from the press conference.

Thanks for the quick work giving us the scoop from the presser Benton. Keep up the good work.

Thanks to both of you for checking it out. Sorry the initial, hurried typos got through unnoticed at first.

"• This could be the deepest team Self has had at KU. The ninth, 10th and 11th players for Kansas right now are better than guys in those slots in the past. Kansas just isn’t top-heavy with nationally acclaimed players."

And these types of teams are generally Self's best!!!

This makes me think the issue is more than just playing time. Purely conjecture.

I'd rather have Frankamp playing than Svi. So much for that. I'm really going to miss him. Pure shooter, great heart, and smart player. Darn.

Benton the timing of this is just off. Why go through the off season, boot camp and then transfer when the feeling is your going to play? Did Conner have to practice with everyone to feel like he was not going to fit the way he was hoping for? It seemed to take everyone by surprise which makes it feel like there is something missing. I wonder if there will be more coming out as to what promted this so near the season.

I think if the issue would have remained platooning with Mason for 3 years, he would have stayed. Devonte Graham will be our starting point guard soon. That would leave CF fighting with Mason for back up time. Last year we saw how much Self favors Mason. I thought this might happen...but next year after Graham was declared starter.

Conner was going to get buried on the bench. I say all the time the players figure out the pecking order faster than coaches or fans. While I personally wish he had stayed, the reality is he figured his best chance to play was going to be going elsewhere. Maybe we underestimated how much Svi coming over clogged that up even more. Regardless, we should wish him well. There shouldnt be angst over this.