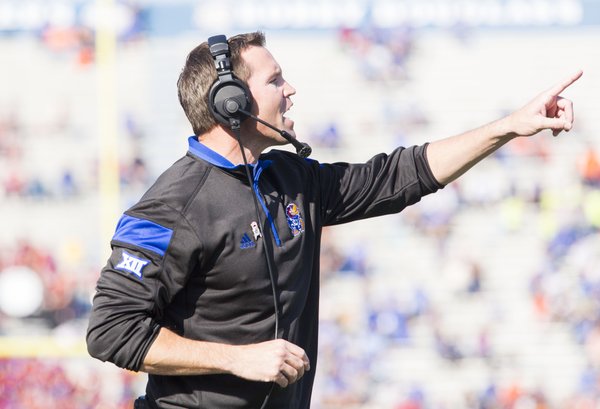 What is Charlie Jr's status? Is he still involved with the team on a day-to-day basis? If yes, does he have as much responsibility on the sideline as he did when CW was the head coach? It's got to be a tough situation for that young man, but if he wants to get into the coaching profession, he is getting a good lesson in the business aspect of football: If you don't produce, you're out on the street. I know that quite a few people are curious about this, but I haven't seen any mention of it.

It has been reported here that Charlie Jr. elected to move on with his dad.

Have there been any reports at all regarding Charlie Weis himself? Like is he still in Lawrence or has he legitimately moved away already? If so, where to? Have there been any sightings or comments from him anywhere? Two weeks is a long time for someone of his notoriety to just disappear completely.

It might do Charlie Jr. some good to shadow a coach other than his dad. Unless he's trying to learn what NOT to do.

I seem to recall reading that he did intern with Belichek last summer, or something like that. He'll have plenty of opps.

What was the surprise Coach Bowen referred to at the beginning of his press conference?

Next year, one of the story lines going into the season will be our loss of 3 starters in the DB's. It will be really nice to have Fish & Boateng with some significant experience.

Lots of possibilities for next year. Smithson, Allen, Shaw, Davis, Neal. There are a lot of kids who will be ready after Spring and Fall practice, especially since we have practices that actually develop players and improve them week to week.