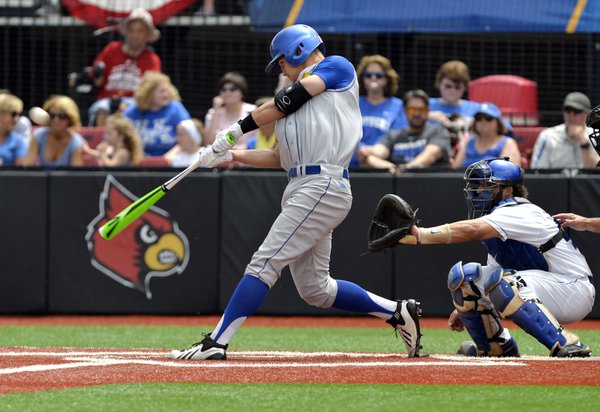 Three weather delays prolonged the regional opener a total of three hours and 22 minutes, but after the third moratorium on baseball caused a near two-hour halt in a tie game, the Jayhawks scored four runs combined in the seventh and eighth innings to move on to Saturday's winner's bracket with a 10-6 victory.

Senior Tucker Tharp put Kansas (35-24) ahead for good in the top of the seventh with an RBI double off the left field wall. He later scored from third, making it 8-6, when senior Ka'iana Eldredge hit into a double play with no outs.

Junior Justin Protacio kept the Jayhawks going in the eighth, providing a 9-6 lead when he drove in sophomore Tommy Mirabelli, who led off with a triple. Protacio later scored on a wild pitch from Kentucky reliever Chandler Shepherd.

The Jayhawks and Wildcats (35-24) were tied, 6-6, in the bottom of the fifth when severe weather stopped the action for the second time in the afternoon.

When play resumed, junior right-handed reliever Drew Morovick took the mound for Kansas, and went 3.1 innings, allowing one hit and no runs — making it possible for the Jayhawks' lead to grow.

Tharp went 3-for-5 with three RBIs in the victory. Backup right fielder Joven Afenir, who entered for Dakota Smith when the starter injured a knee in the first inning, went 3-for-4 and scored a run. Junior Michael Suiter drove in two runs.

Kansas, which led 3-0 in the first inning before an hour-plus delay, scored three more in the second inning after Kentucky's Ka'ai Tom drilled a three-run homer to tie the game.

KU will face the winner of Louisville and Kent State at 4 p.m. CST on Saturday.

Get the blow-by-blow details of KU's long day at the ballpark below.

• [Wright advances to 3B on wild pitch to Dakota Smith]

• Tucker Tharp singles to LF — Smith advances to 3B

• Tharp steals 2B as rain begins to pour — slick ball takes off on C Michael Thomas, ends up in the outfield — Smith scores, Tharp moves on to 3B on the E

T1: KU up 3-0 play suspended with a massive down pour

The rain is falling, play suspended at 2:41 EST with KU leading 3-0 with Tharp at 3rd and McKay up facing 3-2 count pic.twitter.com/EH6I9DAtY1

• Micheal Thomas grounds out to SS

• Storm Wilson grounds out to 2B

• Blair Beck grounds out to 2B

• Michael Suiter single to LF scores Protacio from 2B

• Joven Afenir (entered for Dakota Smith, who hurt a knee before rain delay) singles to LF

• Ka'iana Eldredge grounds out to 2B

• Blair Beck grounds out to 3B

• Justin Protacio grounds out to 1B

• [Cousino advances to 3B on wild pitch to Max Kuhn]

• Colby Wright grounds out to 2B

• Tucker Tharp robbed of hit up middle by sliding 2B JaVon Shelby, who throws him out

• Storm Wilson singles to CF — Thomas advances to 3B; Wilson to 2B on throw

• Thomas Bernal knocks in 2 with base hit up the middle

• JaVon Shelby pops out, foul to 1B Blair Beck, who grabs it right before stepping into Kentucky's dugout

• Austin Cousino chops infield single to SS; Protacio doesn't make throw to 1B and KU is able to tag out Bernal, who took a big turn around 3B

• Ka'iana Eldredge lines out to 2B

Heavens have opened yet again .. tie game 6-6 .. UK will bat when we resume pic.twitter.com/UjMYgOlJ0q

UPDATE: Official start time to resume action is 7:10 EST .. we will be in the B5 score tied 6-6 with Morovick headed in to pitch for KU

{KU RHP Drew Morovick relieves starting P Piche' — no outs, no one on base for Kentucky}

• Ka'ai Tom flies out to LF

• Micheal Thomas pops out to SS Protacio in LF

• Justin Protacio lines out to CF

• Colby Wright grounds to SS, reaches on fielder's choice — Mirabelli out at 2B

• Michael Suiter lines out to CF

• Matt Reida pops out to shallow LF — Michael Suiter throws out Wilson at home, where Ka'iana Eldredge applies the tag with ease

• Jacob Boylan (hit for Blair Beck) grounds out to 2B

• Austin Cousino flies out to CF

• Max Kuhn flies out to RF

• Michael Suiter pops up to 2B

• Ka'ai Tom flies out to CF

• Ka'iana Eldredge flies out to CF

• Thomas Bernal grounds out to SS

• Kyle Barrett (hitting for JaVon Shelby) flies out to CF

• Austin Cousino flies out to LF

dang. i'm in Lexington and it's sunny skies. going to game tomorrow if we can pull this one off.

is KU still going with Piche?

yep, next round is best of 3

eta on the weather update

Just saw on Twitter that NCAA wants to resume at about 6 p.m. CST.

KU baseball officials say second weather delay (in bottom of 5th) will end at 6:10 p.m. CST. That's about an hour and 50 minutes since the stoppage began.

We're a minimum of 4 wins away from Omaha! Let's try to beat the 13th ranked Cardinals at their place first.

This was by far the biggest win of the year for KU. Dakota Smith goes down in the first inning with a twisted knee. I hope he's alright. Then there were two rain delays after the one that delayed the start of the game. It seemed like KU pitchers weren't going to be able to stop Kentucky, then Morovick had an outstanding outing along with Villines.

Kansas needs to start fast again tomorrow and put the pressure on the host team. It hasn't worked out for a few like Florida and Florida State both losing on day one. All 5 Big 12 teams are in the winner's bracket of their respective regional.

4 teams from the SEC lost, and two of them lost to Big 12 teams today.

I thought I read where KU was in the NCAA tourney in '09. If so, that would be 4 seasons without an invite. Right or wrong?

Benton -- what's the injury report on Dakota? Coach said during the TV interview yesterday he went for a MRI and there were worries about significant damage. I sure hope he's okay.