Getting reacquainted with West Virginia 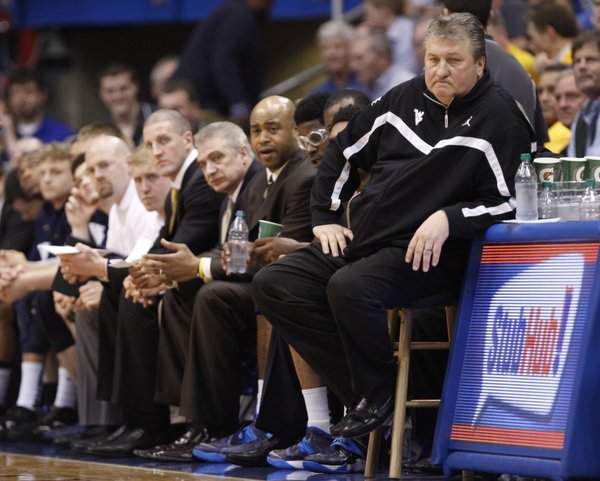 West Virginia head coach Bob Huggins stews on a stool during a stretch of bad play by the Mountaineers in the second half on Saturday, Feb. 8, 2014 at Allen Fieldhouse. by Nick Krug

Keeping Huggins perpetually cantankerous these days, WVU has lost five of its last seven games, including an 83-69 defeat at the hands of Kansas on Feb. 8.

Here's a look at WVU's schedule since then:

Defensive breakdowns have cost the Mountaineers, who give up a Big 12-worst 77.6 points a game in conference action and have allowed Big 12 opponents to hit 47.5% of their shots — also last in the league. They aren't much better at defending behind the 3-point line, either. Big 12 opponents have mad 36.6% of their tries.

When West Virginia has managed to hold opponents 70 points, it is a perfect 10-0 this season.

Its WVU's offense that keeps this team competitive. In Big 12 games, the Mountaineers are:

Additionally, the Mountaineers give themselves a much better chance when they are scoring inside. They are 16-5 this season when producing 20 or more points in the paint. And 0-9 when they don't hit the 20-point mark.

It wouldn't be a first if Huggins' crew is able to pull off an upset victory over Kansas. Now in his seventh season at WVU, his teams have defeated 22 ranked teams, and eight of those victories came against top-10 opponents.

Before we get reacquainted with the players who will attempt to knock off the Big 12 champion Jayhawks at 11 a.m. Saturday at WVU Coliseum, watch this interview with Huggins about the matchup: 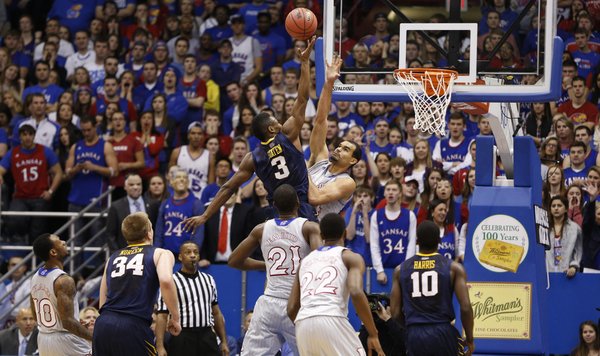 Kansas forward Perry Ellis defends as West Virginia guard Juwan Staten puts up a shot during the first half on Saturday, Feb. 8, 2014 at Allen Fieldhouse. by Nick Krug

A don't-blink-or-you'll-miss-him guard who could be an All-Big 12 First team selection when postseason awards are announced on Sunday, Staten averages a league-leading 19.7 points in Big 12 games.

The Bob Cousy Award finalist averages 18.2 points and 5.9 rebounds a game on the season, and a team-leading 5.8 assists.

Too fast for most defenders to keep him in front of them, Staten has attempted 7.3 free throws a game this year and has made 73.1% of them.

He has only made 5 of 14 3-pointers all season and didn't attempt one against Kansas in the first meeting. 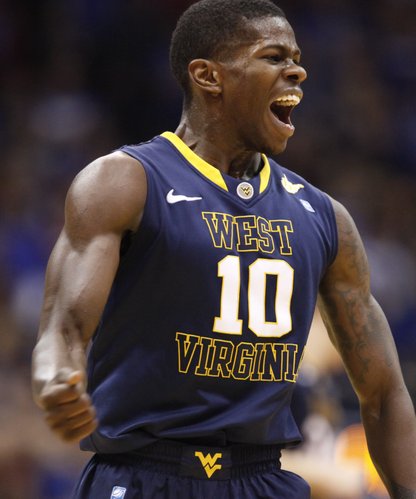 After a hot first half at KU, Harris only scored four in the second, once Kansas began defending him with Andrew Wiggins.

The leading free-throw shooter in Big 12 games (92.8% on 69 attempts), like Staten, enjoys creating havoc off the dribble.

Among Big 12 players, only Phil Forte of Oklahoma State (88) and Brady Heslip of Baylor (95) have made more 3-pointers than Harris, who is tied for third in that category with Buddy Hield of Oklahoma. 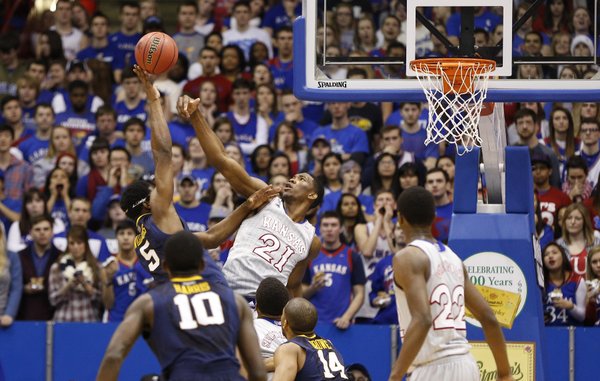 The big man just couldn't figure out a way to stay on the floor at Kansas. Williams fouled out while playing just 12 minutes.

Clearly, WVU needs him on the court. He grabbed six rebounds during his cameo in Lawrence.

He'll have one less post threat to worry about this time, with Joel Embiid resting his strained back, so Williams should have an easier time producing near his season averages of 8.3 points and 7.1 rebounds.

Dibo forced some bad shots at KU, but he still produced close to his season averages of 7.4 points and 3.3 rebounds.

His past two games have gone much worse for him, though. Dibo combined to go 2-for-13 against TCU and Oklahoma, scoring two points in each contest and missing all six of his 3-pointers.

The freshman big came off the bench when WVU played at Kansas, but he is a starter now due to an illness that has kept Terry Henderson off the floor.

Adrian only averages 5.6 points and 2.9 rebounds on the season, but he scored 14 points and pulled down six rebounds against TCU before going scoreless at OU with two boards.

He only scores 6.1 points a game, but he is the most experienced player on the roster, having appeared in 94 career games.

Browne is capable of more than his average shows, too. He has 21 double-figure scoring games in his career, with six coming this season.

Huggins said in an interview this week he doesn't know how much the team can expect out of Henderson — the team's third-leading scorer this season — against Kansas.

Since KU limited the sophomore guard at Allen Fieldhouse, he has battled an illness that kept him out of the past four WVU games.

If Henderson can go, Kansas will have another WVU perimeter weapon to worry about. The sophomore guard averages 12.1 points on the season and has made 42 of 113 3-pointers (37.2%).

This is a dangerous game on a few levels. The time it will be played, how hungry WV will be, and what our mindset will be.

I hope we win, but I think there is a real shot we get beat, due to their guard play and it is about time for another high turnover game.

There's always a chance one could get beat on the road in this conference this year, but of all the road games not TCU, this one concerns me the least. WVU has been struggling and knows their only shot comes in the B12 Tournament, not this home game. They have to run the Tournament to get in. I think this team understands their possibilities from here on out and will be focused and business like.