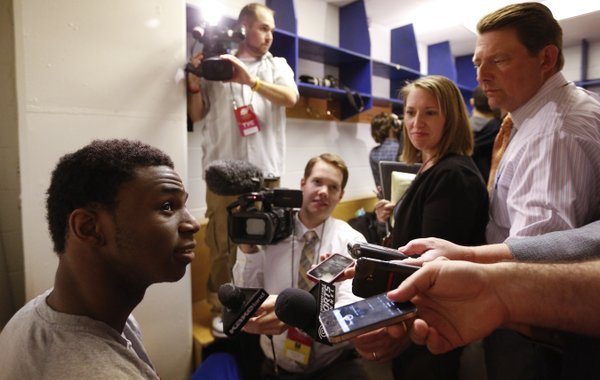 Kansas guard Andrew Wiggins grins as he answers questions from media members in the team locker room during a day of press conferences and practices at the Scottrade Center in St. Louis on Thursday, March 20, 2014. by Nick Krug

To wrap things up with our media day blog, here are a couple of final thoughts on KU's Friday opponent, Eastern Kentucky.

The Colonels make 8.9 three-pointers a game (eighth in the nation).

This season, Kansas has allowed opponents to make 35.9% of their three-pointers (257th in the nation).

Jayhawks opponents have made 6.3 three-pointers a game (185th in the nation).

Without giving up any secrets, Traylor said KU has a good game plan in place, and the Jayhawks should be able to go out and do their jobs.

... On a totally unrelated note, you won't want to miss our video from Mike Yoder of Frank Mason showing off his athleticism during KU's open practice.

The 5-foot-11 freshman guard followed a few backflips with a dunk — a real crowd pleaser.

Throughout his basketball life, Evan spent postseasons with his father, Danny. But now that his dad's Tulsa team is playing in the NCAA tournament, March has a slightly different feel for the younger Manning.

The good news: a couple of victories by KU and Tulsa, and the father and son would be reunited in Memphis, one of the Sweet 16 sites.

They know the Colonels are fast, and Friday's game figures to be played at a pace players from both teams will enjoy. The question is whether both sides will be able to thrive. 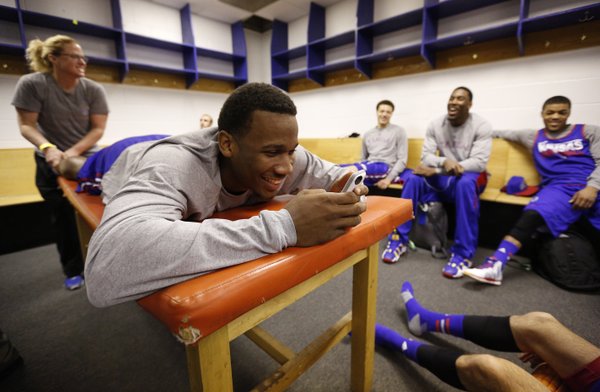 Kansas guard Wayne Selden smiles while thumbing through an iPhone as strength and conditioning coach Andrea Hudy works on this calves in the team locker room during a day of press conferences and practices at the Scottrade Center in St. Louis on Thursday, March 20, 2014. by Nick Krug

One thing that really shines through on a day like this at the NCAA tournament is how much fun it is for the players to be here. They're excited for the postseason and they do actually have some down moments in which they don't have to be uptight or worried about the stresses that come with playing on this stage.

You can really see that in the above Nick Krug photo form inside the KU locker room.

Getting back to tomorrow afternoon's game, KU sophomore forward Perry Ellis said Eastern Kentucky could test KU's ability to get up and down the floor.

"They're a real quick team. Real fast," Ellis said. "A lot of back cuts. We just have to be fundamentally sound defensively, real disciplined and come out with a lot of energy defensively."

Ellis said playing with energy will be the key to the game, because if KU does that good things will follow.

— Check back in later at KUsports.com for more from St. Louis.

(This entry comes from Matt Tait, who has bounced all around Scottrade Center today, gathering quotes.)

Learned a few interesting things in the Eastern Kentucky locker room this afternoon, mostly about their style of play.

There were a few laughs and colorful moments from big man Eric Stutz, who said people always tell him he looks like Jesus, Fabio and Ashton Kutcher, and added that he would like to own a waste disposal company after college.

"There's always gonna be trash," Stutz said. "…If I can get a degree in accounting along with the business aspect of it, all you gotta do is learn how to pick up trash.”

As for what they'll throw at the Jayhawks in about 24 hours, the Colonels, as you surely know by now, rely heavily on the three-point shot and pressure defense.

From the sound of things, they get a lot of open looks off of penetration, so if the Jayhawks' on-ball defense — or help and recovery on the back end — is not on point, EKU may very well get some open looks tomorrow.

Although they shot as many three-pointers as nearly any other team in the country, it's not like they just jack 'em up and don't have a conscience out there. A good chunk of their looks come from running offense and making extra passes, and they really try to take good looks. They do own the philosophy, though, that after one pass, if they've got a good look they can take it.

Senior guard Glenn Cosey made 110-of-259 threes for EKU this season and his teammates said he's the guy they'd want with the ball with the game on the line.

As for that pressure defense. It sounds like it's mostly in the half court and it's mostly a product of just wanting to out-work their opponents. A lot of times, as may be the case with Andrew Wiggins, one of their best defensive plays is to deny the catch. Stutz said Wiggins will get his touches and points and they know that, but they're still going to try to deny him the ball as much as possible.

From what I was told, there's not a lot of full-court pressure with the EKU 'D.' The point guard will usually pick up his man the length of the floor and that effort generally is what fuels the rest of the guys on the floor to get up on their guys.

“That's where our defense starts,” said senior Orlando Williams. “The point guard picking up his man and everybody else is in the passing lanes denying their man.”

It's an interesting match-up and one KU could quickly find difficult if the Jayhawks are careless with the ball and lazy. If they come out sharp, though, and match EKU's effort, they should be fine.

Listen to everything KU coach Bill Self had to say at his press conference:

Eastern Kentucky's players know they have a style that fits March Madness well.

Here are a couple of the Colonels, Orlando Williams and Marcus Lewis, explaining the EKU approach in the locker room Thursday afternoon.

— Check back throughout the afternoon for more from St. Louis.

Reporters basically tripped all over themselves to get interviews with Kansas freshman Andrew Wiggins in a very crowded Jayhawks locker room Thursday afternoon.

Andrew Wiggins is back in there somewhere... #KUbball pic.twitter.com/5cwJr0EwUZ

While Wiggins and some of his teammates dealt with the swarm, senior center Tarik Black and sophomore forward Jamari Traylor took the stage in the press conference room.

People try to make predictions about the tournament, Black added, but they're more like assumptions.

Bill Self took the stage next, and said the Jayhawks were pleased to be playing relatively close to home. Here are some of the highlights from his session:

• Eastern Kentucky does a lot of things that concern him. The Colonels don't turn the ball over, they have eight players who can shoot 3-pointers, and they defend higher on the floor than anybody KU has faced this season.

• All three Division I Kansas programs are here in St. Louis. As a state, each fan base should be proud about that.

• When teams pressure (EKU does) they do so to play to their strengths and skill sets. When KU sees that pressure, the Jayhawks need to not forget to play through their bigs. Hopefully Kansas is prepared for that.

• KU freshman center Joel Embiid has made progress in rehab, but they're taking it slow. The staff is optimistic they can get him to practice next week, if KU is still alive in the tournament. … Without Embiid on the floor, defensive mistakes turn into layups. In his absence, Kansas has to be much more sound defensively.

• Andrew Wiggins has a flair for the moment. That gives Self confidence in what the freshman phenom can make happen in the postseason. Wiggins needs to assert himself offensively and impact more possessions. If that happens, he will score more points.

• Kansas and Missouri, at this point, would have to meet up in the NCAA tournament to renew their rivalry. A scheduled regular-season game probably won't happen as long as Self is coaching at Kansas.

• Andrew Wigins and his brother, Nick, a senior guard at Wichita State, are both playing in St. Louis. Nick was great through the recruiting of Andrew by the KU staff. That played a minor role in Andrew picking KU, as did the fact parents Mitchell and Marita could make one trip to Kansas and see both of their sons play. … The fact that WSU and KU aren't playing each other here in St. Louis is probably better for the family.

• Wiggins will have an opportunity in the postseason to prove any of his critics wrong, but it will take Kansas advancing to make that happen.

Wouldn't you know it, as soon as Self left the press conference, he had a throng of other reporters waiting for him in the hallway.

We just got back from the Eastern Kentucky locker room and coach Jeff Neubauer's press conference.

The Colonels (24-9), out of the Ohio Valley Conference, seem to be taking a laid back approach to their potential role as giant-killers against No. 2-seeded Kansas (24-9) on Friday.

Credit for the upbeat vibe in the locker room goes to ninth-year coach Jeff Neubauer. He has seen up close what it takes to bust a bracket. Neubauer served as an assistant coach at Richmond when the No. 14 seed knocked out No. 3 seed South Carolina in 1998.

Neubauer also worked at West Virginia, when the Mountaineers reached the Elite Eight in 2005.

The coach fielded plenty of questions — about Kansas, coming out of the OVC and March Madness in general. Here are some of the highlights:

• It's so hard in a league like the OVC to get to this point. And it will be a big challenge Friday against Kansas.

• The Colonels have talked all season about embracing challenges. They don't use the word underdog.

• He coached EKU as a No. 16 seed against North Carolina in 2007. The Colonels didn't do a good job out of the gate and ended up in a huge hole and lost by 21 points.

• Keeping that rough performance from 2007 in mind, Neubauer has been practicing his players hard in preparation for Kansas.

• EKU played three tournament teams this season: Wisconsin, North Carolina State and VCU. The Colonels, who went 0-3 in those matchups, played really well at N.C. State for 34 minutes. The game they will try to draw upon against KU is the overtime loss at VCU.

• Kansas has committed a lot of dead-ball turnovers/travels this season. EKU needs steals, not dead-ball mistakes, because steals turn into layups and dunks.

• EKU won't try to make Kansas play small. If the Jayhawks played small, they would still be significantly bigger than the Colonels.

True to their philosophy, EKU players hanging out behind the three-point line during today's open practice. #KUbball pic.twitter.com/USsDqwbo70 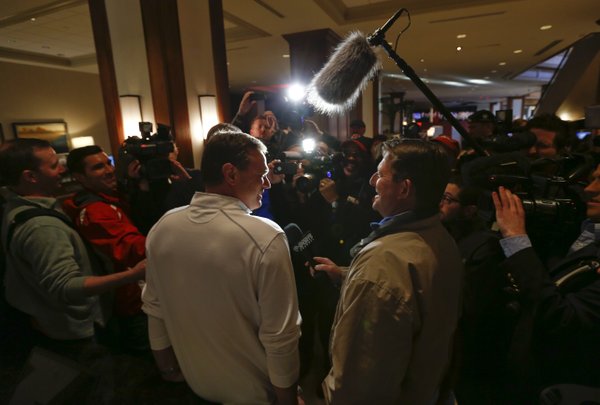 Kansas head coach Bill Self laughs with media members as he stops for questions following the Jayhawks' arrival at the Hyatt Regency hotel at the Arch, Wednesday, March 19, 2014, in St. Louis. The Jayhawks play their first game of the NCAA Tournament on Friday. by Nick Krug

While you're settling in to watch a full day's worth of NCAA tournament games — or sneaking away from work responsibilities here and there to keep up with the potential upsets — the KUsports.com staff will be busy gathering quotes, videos, stories and photos at Scottrade Center, in St. Louis.

Press conferences and open practices are the name of the game today for Kansas University's men's basketball team, as well as the other seven teams playing round of 64 games at the site: Eastern Kentucky, Stanford, New Mexico, Wichita State, Cal Poly, Kansas State and Kentucky.

Check in at this blog throughout the day for updates.

Kansas players and coach Bill Self will meet the media a little after 1:30 p.m.

In the meantime, check out a couple of videos from KU's arrival Wednesday night.