What's in a seed?: How Kansas has fared in the NCAAs on each of the top 4 seed lines

Now that the 2014 NCAA Tournament bracket is official, we know what the next couple of weeks could look like for Kansas University's men's basketball team.

The Jayhawks (24-9) earned the No. 2 seed in the South bracket, and open against no. 15 seed Eastern Kentucky on Friday in St. Louis.

Here are the rest of the Round of 64 matchups for the South bracket:

Believe it or not, this is just the second time in KU coach Bill Self's 11 seasons that the Jayhawks received a No. 2 seed.

The unpredictability of March is what makes the tournament a national treasure. Earning a top-four seed guarantees nothing.

Can KU make it all the way to the Final Four as a No. 2 seed? Absolutely. It happened two years ago. But as KU's rabid fan base is completely aware, playing as a favored seed can go in the other direction, too.

Here is a look back at how Kansas has played on each seed line in the Self era. 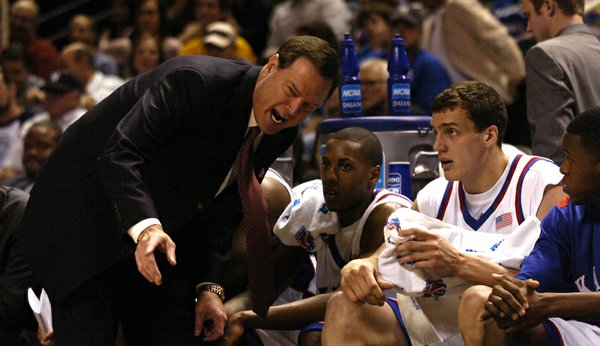 Kansas head coach Bill Self rips into center Sasha Kaun for his defensive play during the first half of Thursday's game against the Salukis at the HP Pavillion in San Jose. Left of center is guard Mario Chalmers and right is guard Rodrick Stewart. by Nick Krug

The first No. 1 seed for the Jayhawks under Self didn't come with an accommodating road to the Final Four. The Jayhawks played the first weekend in Chicago, but the selection committee placed KU in the West regional, which meant an Elite Eight matchup with UCLA in San Jose, California, where the Bruins ended KU's season. 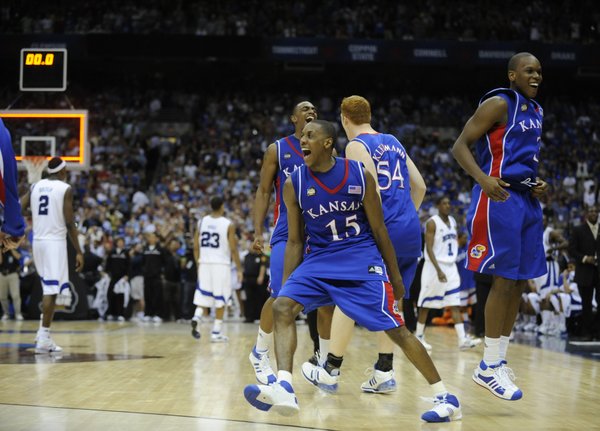 Kansas University's Mario Chalmers (15) leads the celebration as time runs out on the Jayhawks' 75-68 overtime victory over Memphis. Chalmers hit a three-pointer to tie it with 2.1 seconds left in regulation, and the Jayhawks went on to win their first national title in 20 years. by Thad Allender

You could say the 2008 NCAA Tournament worked out all right for Kansas. The Jayhawks' No. 1 seed gave them two games in Omaha, Neb., and two more in Detroit, before they moved on to the all-No. 1 seed Final Four in San Antonio, where KU defeated Memphis in overtime to win the national championship. 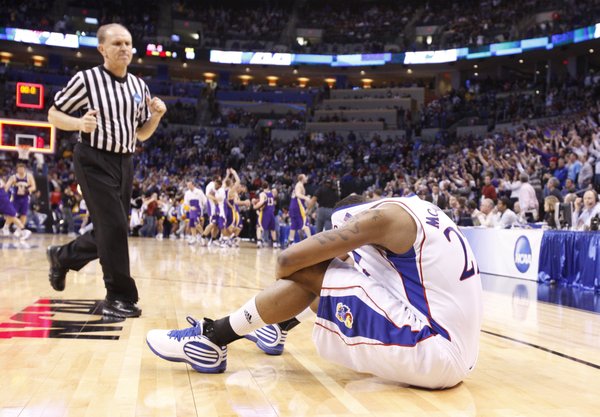 Kansas forward Marcus Morris covers his head after the Jayhawks' 69-67 loss to Northern Iowa Friday, March 20, 2010 at the Ford Center in Oklahoma City. by Nick Krug

This is the worst-case scenario for a No. 1 seed, from a historical perspective. No top seed ever has lost in the first round of the NCAA Tournament. But Kansas is one of the No. 1s to bite the bullet without getting to the Sweet 16. The Jayhawks opened in Oklahoma City, Okla., but never made it to St. Louis, because Northern Iowa ended KU's run before it had a chance to pick up any steam. 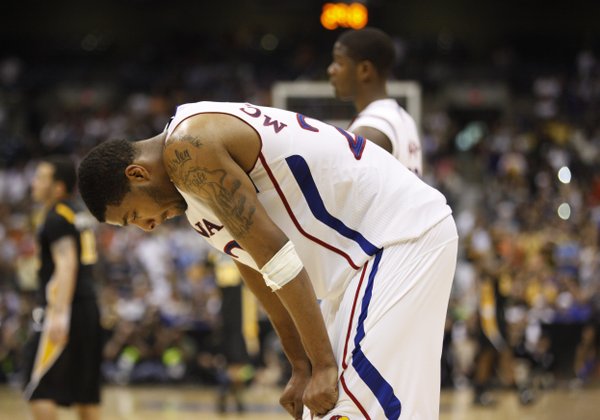 Kansas forward Marcus Morris hangs his head in the waning moments of the Jayhawks' loss to Virginia Commonwealth on Sunday, March 27, 2011 at the Alamodome in San Antonio. by Nick Krug

Kansas handled its coveted No. 1 seed better the season following its second-round exit against Northern Iowa. But after the Jayhawks advanced out of Tulsa, Okla., another mid-major team, VCU, stopped them short of a Final Four by ending KU's season in the Elite Eight, in San Antonio. 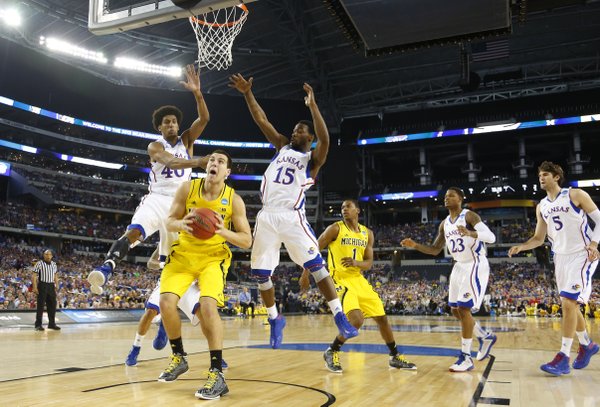 Kansas players Kevin Young (40) and Elijah Johnson collapse over Michigan forward Mitch McGary during the first half on Friday, March 29, 2013 at Cowboys Stadium in Arlington, Texas. by Nick Krug

First weekend sites don't get any cushier for Kansas than Kansas City, Mo. The Jayhawks moved on to the Sweet 16 via Sprint Center. However, the Jayhawks' run ended in their first game at the next stop, Arlington, Texas, with an overtime loss to Michigan. 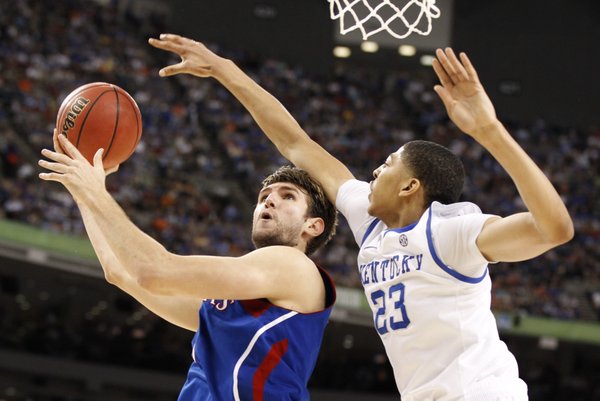 Kansas center Jeff Withey looks for a shot as Kentucky forward Anthony Davis reaches in to defend during the first half of the national championship on Monday, April 2, 2012 in New Orleans. by Nick Krug

Kansas couldn't make it three No. 1 seeds in a row, but the selection committee kept No. 2 seed KU close to home, and the Jayhawks responded by sweeping through Omaha and St. Louis, en route to the Final Four, in New Orleans. Kansas got all the way to the tournament final, where Kentucky stopped the Jayhawks from capturing their second championship in five seasons.

As a No. 3 seed playing not too far away, in Oklahoma City, for the first weekend, many figured Kansas was primed for another deep run in the tournament — and potentially a showdown with the regional's No. 1 seed, North Carolina, in the Elite Eight. Instead, Bucknell bounced the Jayhawks in the first round. 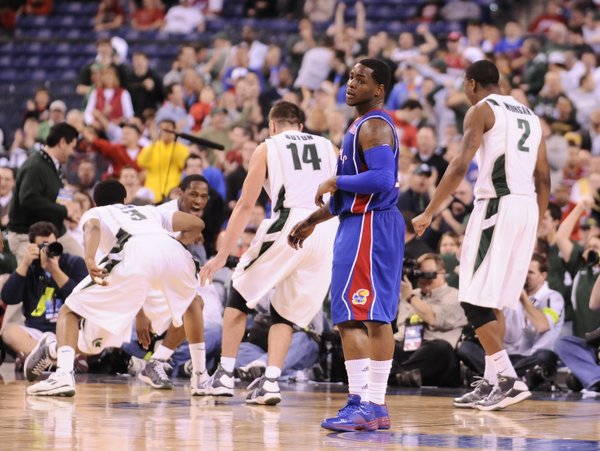 Kansas guard Sherron Collins looks back to the Kansas bench after fouling Michigan State guard Kalen Lucas on a made bucket late in the second half Friday, March 27, 2009 at Lucas Oil Stadium in Indianapolis. by Nick Krug

A year after the program's first national championship in 20 years, Self rebuilt quickly. A young group of Jayhawks earned a No. 3 seed and won two games in Minneapolis before falling to eventual national runner-up Michigan State in the Sweet 16.

Even though the Jayhawks were a No. 4 seed, they enjoyed a more than generous bracket assignment, playing the first two rounds at Kemper Arena, in Kansas City, and the next two in St. Louis, Mo. KU got all the way to the Elite Eight in Self's first season, and were minutes away from a third straight Final Four appearance before losing to Georgia Tech in overtime. 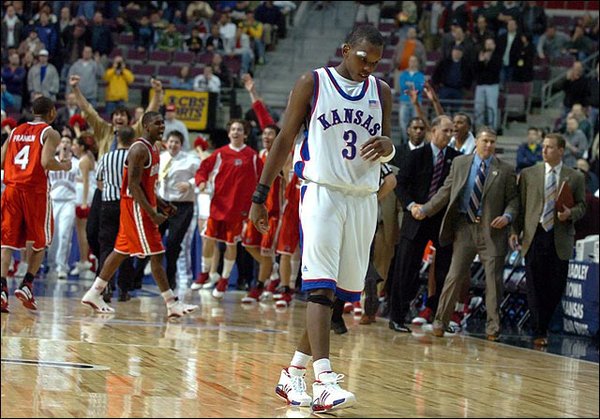 Kansas guard Russell Robinson makes his way from the court as the Bradley Braves celebrate their victory Friday night at the Palace of Auburn Hills. by Nick Krug

A young Kansas team didn't quite have the résumé for a top-three seed, and opened the postseason in Auburn Hills, Mich. Though the players were different from the previous season, the result was the same: a first-round exit for the Jayhawks. This time it came at the hands of another B-school, Bradley.

Nice job. This was interesting to me, and I liked to think back on all those teams.

Man, you brought the Bs memory back again. I wonder if the coaching staff replay those tapes and erase our guys' propensity to look ahead. They need to know seeds don't tell a whole lot.