Getting reacquainted with Baylor 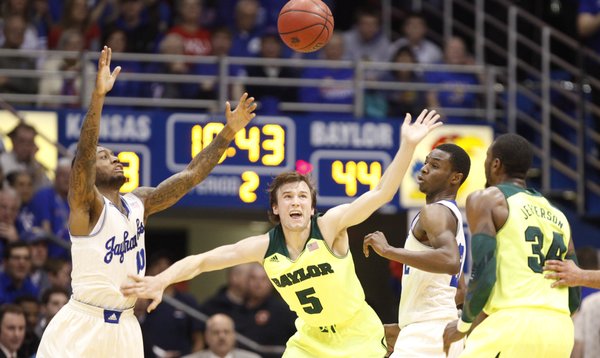 Baylor's free-fall through the Big 12 schedule appears to have stopped, or at least the Bears found a tree branch on which to grasp before crashing to the ground in the NIT forest.

Just when it seemed the losing and tumbling (out of the Top 25, down through the Big 12 standings and out of the list of teams worthy of making the NCAA Tournament) might turn the Bears' season into an unrecognizable pile of disappointment, Scott Drew's team ended a five-game losing skid by winning just its second Big 12 game of the year on Saturday — at Oklahoma State of all places.

The 76-70 victory over the Cowboys (then ranked No. 8 in the country) proved, at most, the people who voted Baylor into the top 10 back in December weren't completely off the mark or, at least, the Bears could beat a team in the Big 12 not named TCU.

The truth probably lies somewhere in between. The good news for Drew is his players shouldn't enter tonight's home game against No. 8 Kansas staggering. You'll remember the Bears (now 14-7 overall and 2-6 in the Big 12) lost, 78-68, at Kansas on Jan. 20.

As the score indicates, Baylor didn't play that poorly. The Bears out-rebounded KU, 31-29, pulled down 20 offensive rebounds on their 36 misses, and out-scored the Jayhawks, 15-8, in second-chance points. BU knocked down 13 of its 27 three-pointers (48.1%) to stick around, but went 9-for-20 at the free-throw line. The Bears only trailed by a point at Allen Fieldhouse with 15:30 left before Kansas pulled away.

Clearly, the Bears know they need to knock off Kansas (16-5, 7-1) to build their résumé back up and reinvigorate their season. They've taken to YouTube to try and get a packed house and an ideal home atmosphere for Tuesday's game at Ferrell Center.

A noisy home arena won't hurt, but if Baylor wants to give KU a true test, it will need to keep pounding the offensive glass (14.5 offensive rebounds a game in Big 12 play) and knocking down three-pointers (the Bears make 8.13 a game in conference action).

Baylor beat KU in Waco, Texas, last season, and is the only team in the nation to have defeated the Jayhawks in each of the last two seasons.

Let's get reacquainted with the players who will try to make it three seasons in a row. 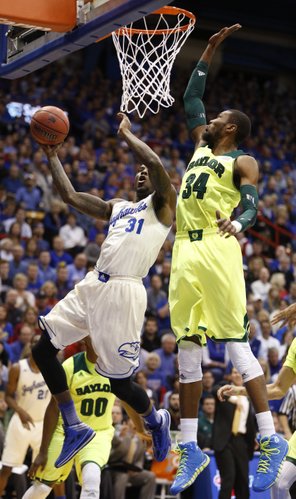 Kansas forward Jamari Traylor maneuvers for a bucket against Baylor forward Cory Jefferson during the first half on Monday, Jan. 20, 2014 at Allen Fieldhouse. by Nick Krug

In 23 of his last 28 games, Jefferson has scored in double figures. Though he has slowed down of late, going scoreless in the first half of each of Baylor's last three games, he has averaged 8.3 points in the second half during that stretch. 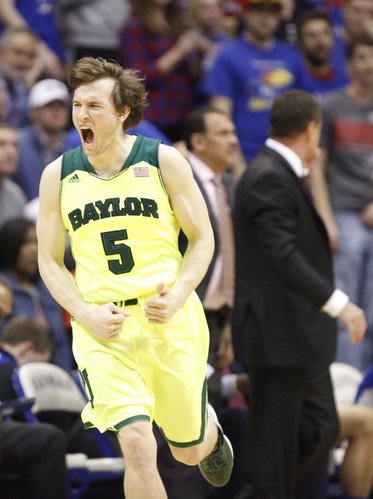 Baylor guard Brady Heslip celebrates after a three against the Jayhawks during the first half on Monday, Jan. 20, 2014 at Allen Fieldhouse. by Nick Krug

A super-sub when Baylor lost at Allen Fieldhouse a couple weeks ago, Heslip accounted for nearly half of the Bears' 13 thee-pointers.

The long-range assassin leads the Big 12 in three-pointers made per game (3.0) and is second in three-point percentage (47.3%), behind OSU's Phil Forte (48% entering Monday). Of his 298 career field goal attempts, 245 of them are from behind the arc.

As much as he gives Baylor an amazing scoring threat from three-point range, Heslip also rarely turns the ball over, averaging one giveaway every 55.1 minutes.

He's averaged 11.3 points this season, and just became a starter two games ago.

The point guard had to miss Baylor's win at OSU with an ankle injury. Drew and the Bears will be glad to have him back.

Chery's 2.6-to-1 assist-to-turnover ratio is third in the Big 12, and he's fourth in the league at 5.0 assists a game. In his last nine games, he passed out 42 assists and only gave the ball away 13 times.

The junior makes 85.1% of his free throws and averages 11 points a game. 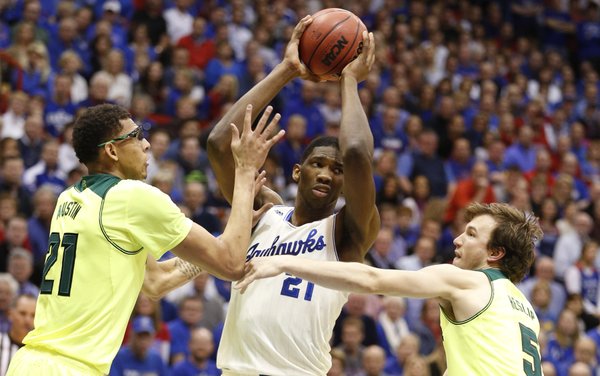 Kansas center Joel Embiid looks for an outlet as he is defended by Baylor players Isaiah Austin, left, and Brady Heslip during the first half on Monday, Jan. 20, 2014 at Allen Fieldhouse. by Nick Krug

Something about playing KU turned the big man three-crazy. Certainly it was part of the game plan — drawing KU posts, primarily Joel Embiid, away from the paint — but it also worked better than anyone could have anticipated.

Austin had made three from downtown all season before drilling a career-high four at Kansas. In Baylor's three games since, the center is 1-for-5 on three-pointers. Expect more bombs from the seven-footer at the Ferrell Center. It must make the sophomore feel even younger, because he hoisted 90 threes last season, compared to 23 so far in 2013-14.

BU really might need his threes to drop, too. Austin hasn't reached double figures since hit outburst at KU.

A strong passer for a small forward at 2.6 assists a game, he typically doesn't contribute much scoring at 5.9 points a game.

But his eight points against Kansas were the most he scored against any Big 12 team this season. He hurt the Jayhawks on the offensive glass, too, extending Bears possessions four times.

With Chery sidelined at Oklahoma State, Franklin went for 11 points, 5 assists and 3 steals in the Bears' critical road win on Saturday.

In seven of his last 17 games, Franklin has contributed double figures. He makes 39.8% of his threes, averages 1.6 makes a game from deep and 6.9 points a game. 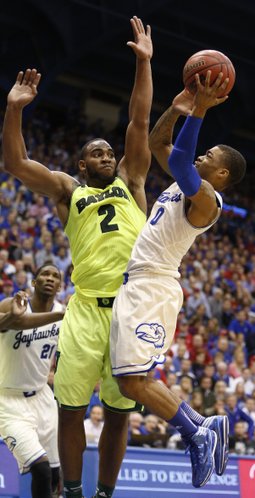 Kansas guard Frank Mason swoops in to the bucket against Baylor forward Rico Gathers during the second half on Monday, Jan. 20, 2014 at Allen Fieldhouse. by Nick Krug

Gathers came through with 14 points and 6 boards at OSU, and averages 7.9 points and 7.6 rebounds.

Sometimes Prince comes up with much-needed production and sometimes Drew barely plays him enough minutes to make an impact.

Obviously, Prince was a non-factor at KU. Ditto for Baylor's Saturday win at Oklahoma State (3 points in 11 minutes). But in the two games in between he produced double digits both times. The forward had 12 points and 6 rebounds against Texas, and 11 points, two three-pointers and 3 rebounds against West Virginia.