Getting reacquainted with the Sooners 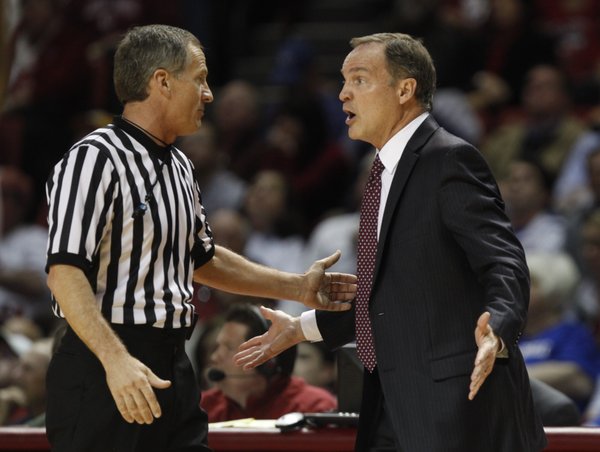 Oklahoma head coach Lon Kruger pleads to an official during the first half on Wednesday, Jan. 8, 2013 at Lloyd Noble Center in Norman, Oklahoma. by Nick Krug

It feels like about a year ago that Kansas University's men's basketball team last faced Oklahoma.

Actually, it was only close to a full Big 12 schedule ago.

OU has played 12 times since the Jayhawks beat the Sooners, 90-83, back on Jan. 8, in Norman, Okla., and KU has competed in 13 games in the six-plus weeks that have passed since their first meeting.

This rematch doesn't have the same anticipation surrounding it as KU's revenge sequel with Texas on Saturday, but Oklahoma (20-7 overall, 9-5 Big 12) is one of three teams currently tied for second in the conference (Iowa State and UT are the others) and quickly running out of time in its pursuit of Kansas (21-6, 12-2).

Tonight's Big Monday game at Allen Fieldhouse is one of KU's biggest to date, because a victory guarantees the Jayhawks at least a share of their 10th straight Big 12 championship.

Kansas coach Bill Self said Saturday night it has been long enough since KU faced Oklahoma that players from both teams have long forgotten the intricacies of the scouting reports they received for that game.

So, what have Lon Kruger's Sooners been up to? For one, they spent most of Saturday afternoon blasting Kansas State. The final score was OU 86, K-State 73, but Oklahoma led by as many as 27 points in the second half on its home floor.

That was Oklahoma at its best, but the Sooners have been inconsistent over the past few weeks. In fact, three of OU's five conference losses have come in the last six games. The Sooners really needed their win over K-State on Saturday, as well as their victory at Oklahoma State (without Marcus Smart) a week earlier, because prior to that they had dropped three of their previous four:

Despite its recent road setbacks, Oklahoma is 8-4 away from Norman this season — 4-3 in true road games and 4-1 at neutral sites.

The Sooners create most of their success on the offensive end of the court. In Big 12 games, Oklahoma is:

Kruger has embraced the power of the 3-pointer, so OU isn't shy from behind the arc. The Sooners average 21.8 attempts from deep per game, and they are the only team in the Big 12 with six players to have made at least 20 3-pointers.

Let's get reacquainted with the six OU gunslingers (and one of their teammates). 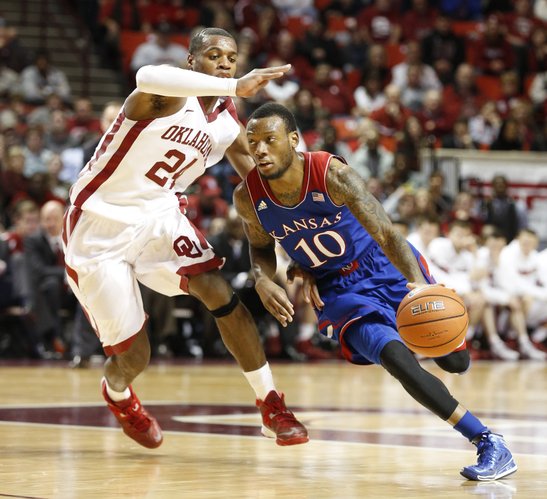 In three of his last six games, he has made five from downtown. 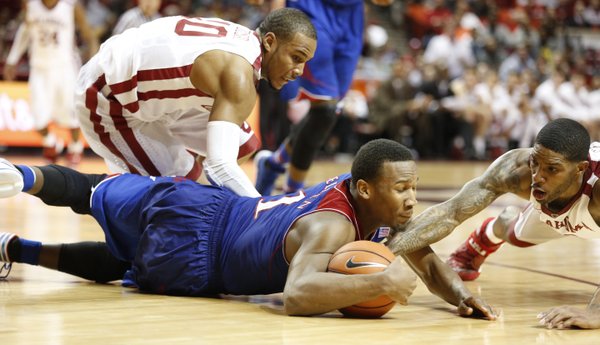 Kansas guard Wayne Selden gets on the floor to secure a loose ball from Oklahoma defenders Jordan Woodard (10) and Cameron Clark late in the second half on Wednesday, Jan. 8, 2013 at Lloyd Noble Center in Norman, Oklahoma. by Nick Krug

Percentage-wise, the versatile forward is OU's most effective 3-point shooter. Clark, who torched Kansas for 32 points back in January without even making a 3, has converted 28 of his 60 tries from downtown (46.7%).

He tends to wear down defenders in the second half — that's when 128 of his free-throw attempts have come.

Sixth in the Big 12 with 4.7 assists a game, the first-year point guard can set up his teammates almost as easily as he can create his own offense.

The sophomore is coming off a 6-for-11, 17-point outing against K-State and has made 43.4% of his field goals this season. His career high of 21 came four games ago against Baylor.

Hey, it's a Sooner who isn't going to shoot a 3-pointer … Well, actually he might, too. Even OU's bruiser has hit 3 of 11 from distance.

But most of the time, you'll find Spangler attacking the glass — and not just on defense. The sophomore power forward averages 9.6 boards a game and about a third of those come on offense (3.3 a game).

The hard-working big man has 10 double-doubles to his name and leads the league in boards. He has been successful on 60.2% of his shots this season and made at least half of his attempts in 23 of OU's 27 games.

His board production fell off against K-State, when he only had two, but in other Big 12 games he has hauled in double-digit totals seven times, with a season-high 17 coming against Oklahoma State late last month.

In just 15.9 minutes a game, the substitute forward scores 6.8 points and pulls down 3.4 rebounds. 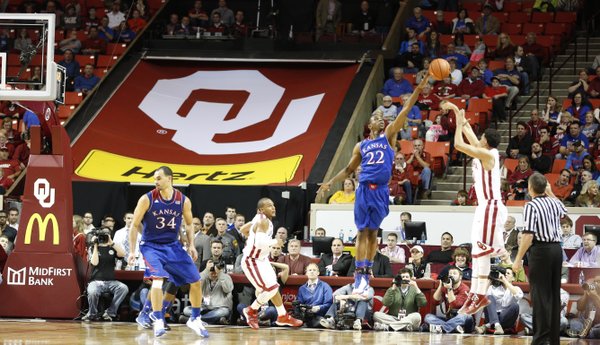 Kansas guard Andrew Wiggins blocks a late three from Oklahoma guard Frank Booker during the second half on Wednesday, Jan. 8, 2013 at Lloyd Noble Center in Norman, Oklahoma. by Nick Krug

A relative non-factor against Kansas the first time around, the backup guard has done damage against other Big 12 opponents and averages 5.3 points on the year.

On the season, Booker has hit 34 of 93 3-pointers (36.6%). The guy loves hanging out beyond the arc. He has only made seven two-point field goals this season.

OU is one dangerous team and could beat us tonight.....Need to come out with one tough defensive stance tonight....can't let OU get comfy..CAN'T

You have to play solid and aggressive defense against OU. When that is done, they become much less effective as their defense can rarely bale them out.

Will be interesting with both teams coming off of big wins where they played out of their minds. Would be nice to see another blow-out but I think this will be a grind...