Getting to know Texas Tech 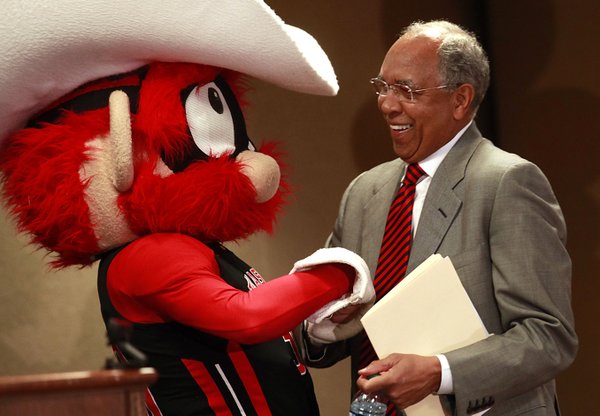 It had to happen sooner or later.

From the day Texas Tech announced the hiring of Tubby Smith as its new men's basketball coach (as celebrated in the amazing photo above), you had to figure it was only a matter of time before he began turning the program around.

The man can coach — even at a program as downtrodden as Texas Tech has been the past few seasons.

The Raiders' conference victories to date are: vs. Baylor, at TCU, vs. TCU, vs. Oklahoma State and at Oklahoma.

They had won three in a row before playing at Hilton Coliseum on Saturday. And they even hung around until the final minutes in a 70-64 road loss to Iowa State.

Here are the Tech highlights from what was just their second road win of the season:

Obviously, the Red Raiders (tied for 7th out of 10 teams in the league standings) aren't a squad that many would fear, but they do some things well.

Let's meet the players Kansas has to worry about as the Jayhawks try to give KU its ninth straight win against Texas Tech and its fourth straight victory in Lubbock, Texas.

Smith plays Crockett at small forward to form a big lineup that can create matchup problems for some teams — but Kansas should not fall into that category with a frontcourt of Joel Embiid, Perry Ellis and Andrew Wiggins.

Crockett averages 14.8 points and 6.7 rebounds this season, and had a career-high 23 points at Iowa State on Saturday.

Including the non-conference, he is shooting 53.8% from the floor. 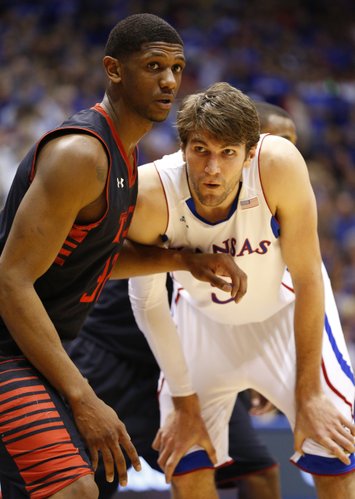 Kansas center Jeff Withey waits for an inbound pass as he is covered by Texas Tech forward Jordan Tolbert during the first half, Monday, March 4, 2013 at Allen Fieldhouse. by Nick Krug

Closing in on career numbers of 1,000 points and 500 rebounds in his third year with the program, Tolbert averages 10.8 points and 5.8 rebounds a game this season.

His 50 offensive rebounds (2.0 a game) put him slightly behind Crockett for the team lead.

Smith's first signee when he took over last spring, Turner (a junior college transfer) has been one of the most successful thieves in the Big 12 this year, averaging 1.67 steals a game against conference opponents.

His 2.8 assists average leads Tech, and he scores 9.7 points a game.

Turner had 16 points and 5 assists in the Red Raiders' win at Oklahoma.

A do-it-all type of player, Gotcher has handled point guard, shooting guard and small forward responsibilities at various times this season, while averaging 7.7 points and 3.0 rebounds.

In his most recent effort, Gotcher put up 14 points and pulled down 6 boards on Saturday in a six-point loss at Iowa State.

Gotcher's 20 three-point makes are second on the Tech roster, but he only hits 32.3% from deep.

The 7-footer doesn't exactly dominate — 6.4 points, 4.5 rebounds and 1.2 blocks this season — but he has done slightly better in three career games against Kansas: 9.7 points and 5.0 rebounds (but only 0.3 blocks).

In six of his last seven games he hasn't scored more than six points. In his one productive contest, he had 18 against TCU.

After the Raiders beat the Horned Frogs on Feb. 1, Kravic talked a little about how the team's big men work together.

Actually named after longtime baseball manager Dusty Baker, Hannahs plays 22.6 minutes a game off the bench. What he brings to the floor is a legitimate 3-point shooting threat.

The sophomore attempts 3.8 three-pointers a game, has made 37 from deep this season and has converted 39.4% of his 94 tries.

Familiarity, in regards to our extended Big 12 family of student athletes, aborts contempt in our fan base of informed enthusiasts. So much more enriching than time spent of those collectively memorizing two word chants that rhyme with "KU" in Manhattan. Nice work and thank you.

Thanks for catching the mistake. Must've punched in the numbers wrong and not thought about it.

"Obviously, the Red Raiders (ninth out of 10 teams in the league standings) aren't a squad that many would fear, but they do some things well."

I think that should be "at OU" not "at OSU." Sorry. The point is well taken though. TTU is a team on the rise. Feel free to rip my blog apart any time you would like.

This is a team not to take lightly. Tubby is a winner and he will show them how to play with discipline. This year no one fears TCU, but everyone else in the league has something to be concerned with and Tech will be good in the near future.Tubby takes teams to the tourney, coaches the right way and an underrated coach overall. As a man of true character I hope TT embraces him and realizes they have a good one at the helm.

Thanks for the help, guys. Apparently I had an off night. What I get for multi-tasking, I suppose.