Jayhawks facing challenges on and off court 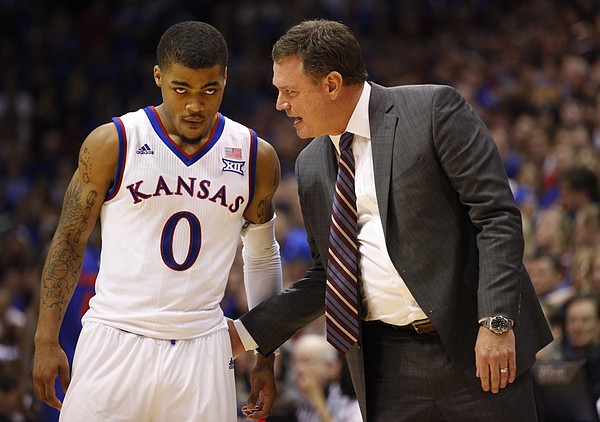 Kansas head coach Bill Self has a chit-chat with point guard Frank Mason during the second half on Friday, Dec. 5, 2014 at Allen Fieldhouse. by Nick Krug

Kansas University’s basketball team is in the midst of a challenging non-conference schedule, with games this week at Georgetown (5-2), and against No. 13 Utah (6-1), in Kansas City, Mo.

Coach Bill Self talked a little about that Monday afternoon at his press conference, but also had to deal with some off-the-court issues for his No. 10 Jayhawks (6-1).

• Self opened the press conference by addressing Jamari Traylor’s weekend arrest. The junior backup forward is suspended for KU’s Wednesday game at Georgetown. Self called him a “good kid” who “made a bad, bad choice.”

• KU saw two different versions of itself against Florida: the way to play and the way not to play.

• Georgetown is playing through big man Josh Smith (12.7 points, 6.9 rebounds). He’s a good passer and his production per minute is “off the charts.” KU has seen Smith both when he played at UCLA and as a Hoya.

• Georgetown is physical, but they play different offensively than the Hoyas used to under John Thompson, now that his son, John Thompson III, is there. Thompson III played at Princeton and that’s the offense they run.

• At this time of the season, practice is pretty important. There is so much stuff to get in. Kansas needs guys getting comfortable.

• Freshman power forward Cliff Alexander embraces contact and that gets him to the foul line. When he and Smith are guarding each other there will be some banging going on. Alexander played great, and with energy in the second half against Florida. He and sophomore forward Landen Lucas are KU’s most physical guys.

• Alexander has probably played as well as any inside player for KU this year. A lot of Perry Ellis’ stuff comes on the perimeter, too. Alexander will emerge as someone Kansas can play through. He’s actually out there with a purpose now. Cliff is “as coachable as anybody we’ve had.” He’s trying to be a sponge.

• KU’s non-conference schedule should be good for this team — Kentucky, Rhode Island, Tennessee, Michigan State, Florida, Georgetown, Utah. That’s a pretty tough stretch from the Orlando Classic to this weekend’s game against Utah at Sprint Center. The thing that makes it hard is KU hasn’t played gimmies. That’s what’s been good for the Jayhawks. In timeouts the coaches can say, this situation will be good for us. Even being down 18 against Florida or getting blown out by Kentucky.

• On College Football Playoff: Self thought what happened was going to happen but he was holding out hope one of the Big 12 teams would get in there. Both TCU and Baylor and unbelievable years.

• Self would be fine with whatever if the Big 12 looked at expanding for the benefit of football. He doesn’t understand the “One True Champion” deal that people use as a negative against the Big 12, though.

• Florida and Georgetown played, so of course Kansas studied that video. KU knows how good Florida is, and they lost to Georgetown in overtime. The Hoyas’ whole offense is designed to exploit defensive unsoundness. Georgetown will make them look bad at times, that’s for sure.

• There’s no question, KU needs to play Frank Mason III and Devonté Graham together. They can really put pressure on defenses.

• Wayne Selden Jr. can be an NBA player. He has vision, can shoot, is tough, has a physical way about him.

• Self hasn’t had a chance to talk to new Kansas football coach David Beaty a lot, but he knows he’s a night owl. Beaty texted him at midnight. Self also is happy for Clint Bowen because he’s a big part of Kansas football.

• Getting introduced as the new head coach is strange. You’re kind of in a fog things happen so quickly. It’s nice to win the press conference but it’s also good to get the fluff out of the way so you can get to work.

• Kansas becoming a good football program helps the basketball program and the university financially. It brings “unbelievable” exposure to KU. The name Kansas needs to be out there. It doesn’t have to be Kansas basketball. Self wants to bring recruits in when there’s energy on campus. The basketball team wants the football program to be good. … Basketball is so much easier to turn around. You go recruit two studs and you’re right on track.

• It’s nice to have unique things like the Jayhawk mascot and the “rock chalk” chant. It helps give the programs at KU something different and memorable. That helps promote the brand, too.

• There might not be as much open court stuff as there was in the past in college basketball. Self has always thought you have to play 10 or 15 games before you can really look at stats and get a good picture out of them. In KU”s situation, the team has to make shots from the perimeter or their stats aren’t going to look as good… And the last 10 minutes always varies what your pace is.