Getting to know the Utes 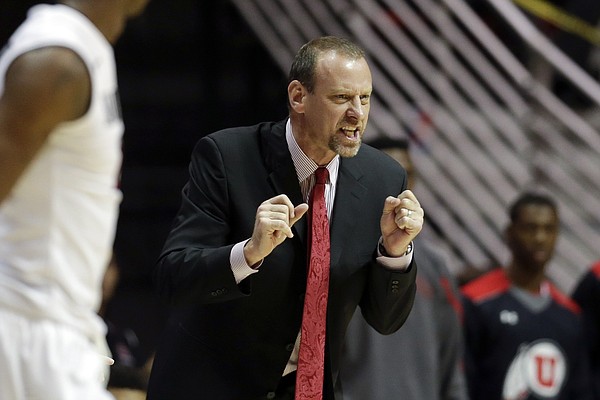 When No. 10 Kansas takes on No. 13 Utah Saturday afternoon at Sprint Center, it will be another tough non-conference game for the Jayhawks (7-1), but it could mean far more for the Utes (7-1).

While this kind of game comes around often for KU, it’s a rare showcase and opportunity for Utah. The 2:15 p.m., nationally televised (ESPN) matchup marks the first time a Utah team ranked in the top 15 has taken on a top-10 opponent since the Utes fell to Kentucky in the 1998 National Championship game.

Coach Larry Krystkowiak’s team just last week knocked off Wichita State (then ranked No. 8) in Salt Lake City. But Utah entered that game ranked 25th. Now the Utes — their only loss came at San Diego State (currently ranked No. 18) less than a week into the season — are surging toward the top 10. What better way to announce yourself to the college basketball nation than by knocking off Bill Self’s team in KU territory?

Krystkowiak’s Utes certainly look the part of a top-15 team, if not better. Utah leads the Pac-12 in scoring defense (57.4 points allowed) and rebound margin (+10.5), and has limited opponents to 35.8% shooting from the field — 17th in the nation.

Offensively, Utah has made 51.6% of its shot attempts overall, including a 41.6% clip from three-point range.

As Luke Winn wrote about for SI.com, the Utes also have cashed in on easy points at the free-throw line by being the aggressors. In four of Utah’s games, it has attempted 19 or more free throws than its opponent. Even against Wichita State (currently ranked No. 11), the Utes took 10 more free-throw attempts.

Utah is averaging 29.6 free-throw shots a game, and making 66.2%. Kansas is right there with the Utes, though. The Jayhawks are getting to the foul line 29.3 times an outing. Plus, they’ve been more successful, making 73%.

Are you ready for some free throws?

With all that in mind, it’s time to meet the Utes KU will have to hold back (and keep away from the charity stripe) in order to score another quality non-conference win. 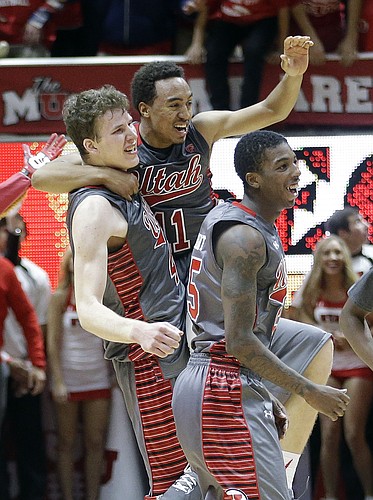 A Wooden Award candidate, Wright is averaging 18 points, 5.6 rebounds, 4.6 assists and hitting 69% of his shots the past five games.

— hoop-math.com nugget: Wright is an attacker. He has taken 36 shots at the rim, which leads Utah. Almost half of his attempts (48.6%) come there and he makes 72.2% of those quality looks in the paint.

He might not get much national buzz, but the Austrian native seems to be one of the better first-year post players in the nation.

Like Wright, he has led Utah the past couple of weeks. Poeltl has averaged 12.2 points and 9.6 rebounds the past five games, while proving nearly unstoppable when he attacks offensively, making 25 of 31 shot attempts (80.6%). He went 10-for-10 against North Dakota.

What’s more, Poeltl could be the kind of big man who makes KU miss inside. The young 7-footer averages 2.9 blocks a game.

If he has a clear weakness, it’s at the foul line. Poeltl has attempted more freebies than any of his teammates (49), but he is only shooting 44.9%.

You’re looking at one of Utah’s 3-point gunners. Taylor leads the team with 39 attempts from downtown and 14 makes (36%). He now ranks 10th all-time in program history with 111 career threes. Plus, he is 10th all-time in accuracy, as a career 40.5% marksman from deep.

In knocking off Wichita State, the junior floor general scored 17 points and dished four assists. Of course, he also hit 3 of 7 from 3-point land.

— hoop-math.com nugget: Second on the team with 59 field-goal attempts, Taylor prefers firing away from deep. That’s where 66.1% of his shots have been attempted from. Only 15.3% of his looks have come at the rim.

He starts, but he has been more of a complimentary player for Utah because he entered the season as a backup. Ogbe moved into the starting five when Jordan Loveridge (11.5 points) suffered an injury.

Ogbe only scored two points (free throws) against WSU, but followed that up with a nine-point night at BYU in a rivalry-game road win.

If left open, he’s a capable 3-point shooter, having made 9 of his 19 attempts so far.

— hoop-math.com nugget: On each of Ogbe’s 3-point makes, a teammate has set him up with an assist. He’ll be spotting up on the perimeter waiting for good looks.

Another role player for Utah, he only averages 4.6 points and 4.4 rebounds.

Reyes can battle. He grabbed nine rebounds in a loss to San Diego State.

While he has started every game, he only plays 18.1 minutes.

— hoop-math.com nugget: Reyes is eighth on the team in shot attempts. When he does score it’s most often because a teammate drew the defense’s attention and set him up: 80% of his makes at the rim have been assisted, as have been 77.8% of his two-point baskets from farther out.

After missing the first four games of the season, he’s proven to be a valuable backup.

Tucker played 34 minutes and scored 13 points against Wichita State. At BYU he hauled in six rebounds and score five points.

— hoop-math.com nugget: Of his 24 shot attempts through three games, only three have come in the huge area of the court between the rim and the 3-point line. He’s scoring at point-blank range and form deep almost exclusively.