A few links for your Thursday morning ... 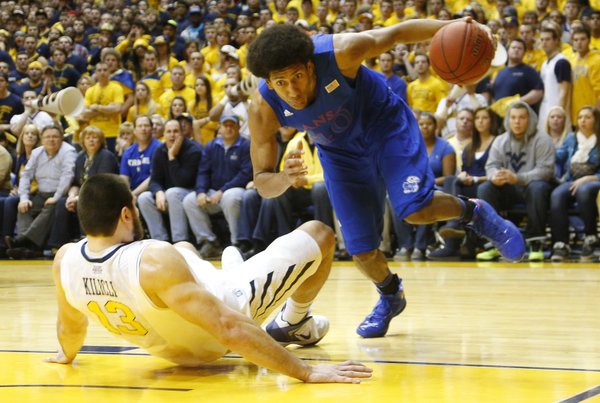 Kevin Young (40) drives the baseline on Deniz Kilicli (13) in the Jayhawks 61-56 win against the Mountaineers Monday night at West Virginia University. by Mike Yoder

• As you might have expected, the postgame Facebook reaction to the Kansas men's basketball team's alternate, monocromatic uniforms from Monday was not great.

My take: They look good on a poster but are terrible for TV viewing purposes. Somehow, adidas needed to come up with a way to make the numbers to pop out a little bit more.

• This has been mentioned before, but here is KU director of basketball operations Doc Sadler's half-court shot video if you haven't seen it yet:

• A good feature here from JayhawkSlant's Bryan Cisler, who talks about how KU — and specifically KU assistant athletic director for sports performance Andrea Hudy — is using cutting-edge technology to help prevent injuries while targeting areas of strength improvement for each athlete.

• Baylor coach Scott Drew took a funny spill during the last seconds of his team's home loss to Oklahoma on Wednesday night, falling to the floor as BU guard Brady Heslip's potential game-tying three rattled out.

• Colorado coach and former KU player Tad Boyle has a talented 10-year-old son, Pete, who loves to dance during the Buffaloes' home games as a floor sweeper. Video is from Fox 31 in Denver.

• And finally, a blast from the past: Here's a December 1996 article from SI.com's Vault that talks about the Jayhawks' high expectations for the 1996-97 season. Included topics are Jacque Vaughn's injured wrist (and quoting of poet Robert Frost), Jerod Haase's offseason work on his shooting and Paul Pierce's insistence that he wouldn't be afraid to take the big shot at the end of games.

As you'll remember, KU finished 34-2 that season, falling in the Sweet 16 to eventual national champion Arizona.

Another great Seen It? Blog. Are we gonna see another episode of Pay Heed soon?

I wish Pay Heed had a daily installment! Impossible I know, but I can't get enough

Drew just fine, having been able to send 3 text messages to recruits before he stood up.

Supposedly new NCAA recruiting rules won't restrict calls and texts in the future. I don't know if that's good for Drew who does it anyway, or bad for him now that everyone who recruits by the rules can do it, too.

That's what he gets for getting out of the coaching box.

Really like this as an addition to the site - thanks, Jesse!

Respectfully, I cannot imagine any poster those gosh awful ridiculous uniforms would look good on. KU has one of the best uniforms in collegiate athletics. Wear the KU UNIFORM and be proud. That was a simply a two bit sliming down of the heritage of the uniform and hopefully every one of them will find their way to a very large incinerator never to be seen again. The only thing that was worse than those uniforms was the play of our point guards.

Why would you bring up the 96-97 season? Uggghhhh... most painful loss I've ever watched. Worse than N. Iowa, VCU, UTEP, UK, Virginia, Bucknell, Bradley, Illinois, Maryland, and even Syracuse. Most talented KU team I've ever seen. I still say we win that game 9 times out of 10. Such heartbreak. Even Roy said it was his greatest loss ever. And here it is popping up in 2013 as a reminder. Why, Jesse, why???? Ha.

I agree. I tell friends all the time. The best KU team I've ever seen is the '97 team. No one was close to our level that year.

I remember a picture of the starting five with Scott Polards green Cadilac (I think called Marvin). Jacque was laid out accross the hood. Scott in the drivers seat with Raef, Paul and Jared in the car with him. Anyone know of the picture I'm speaking of?

Started 23-0 with the only regular season loss being that double-overtime crazy game at mizzou. That 96-97 KU team was incredible. Every single game they had what was referred to as "the patented KU run." We'd blow by everyone and be up 30 somewhere early in the second half every game.

That AZ loss was one of the worst I've experienced. I still vividly remember Raef grabbing the rebound, running out to the three point line and heaving a turn around jumper as time expired only to see it clank off the rim. I also vividly remember going outside and chucking a beer bottle into the middle of the 14th and Vermont intersection.... .....[sigh].......

I broke my remote when I threw it accross the room.

Stubborn Roy played Jared Haase. Jared played one-handed with a broken wrist. Roy finally caved in the second half and substituted, but it was too late. Will never forget it.

Being extremely picky here, but I believe KU was 22-0 when they lost to Misuse. I still remember that one, when it looked like JV had stolen the ball and it bounced out to the Misuse player at the free throw line. Just purely bad luck that KU lost that one.

As for the Arizona game, it still hurts to this day -- as does the Syracuse loss in '03. But I think Syracuse is still slightly more painful because KU killed themselves with their 12-for-30 free-throw shooting. At least UA went on to beat two other 1 seeds. KU should have beaten Syracuse easily.

that's the last time the University declares that school will not be cancelled if we win a National Championship.

Thinking about that game I still get angry. That was our game and our championship. If Haase's had had not been injured we would have run away with that game and championship. Paul did everything in his power the last few minutes to bring it back home but it was just not quite enough. After leaving the viewing site where I watched the game I was in a total daze, didn't realize it but I was driving down the highway at about 85 mph when I was stopped by the cops, tried to explain to them what had just happened but they didn't like my answer and gave me a ticket anyway. Oh by the way, I had watched the game in Houston and was on my way back to Galveston when I was picked up. I had just started a job in Galveston in January and the going away gift I had requested was a signed ball from the team, which I received, certain it would be a ball that had been signed by the NCAA Champs of '97. Still treasure the ball, even though we didn't win it all.

I was at that game - in the band about fifteen feet from Jacque Vaughn when that ridiculous touch foul was called on him. I vividly remember the feeling that this was NOT supposed to happen. Not to this team. (And not by losing to a team which, it turned out later, exploited little-known loopholes in the NCAA rules to keep Bibby and Simon from being declared ineligible. Yep, still bitter.) It was the worst I ever felt after a loss. The absolute worst. I agree with KU_alum_2001: Why, Jesse, why????

I literally couldn't sleep for almost a week. I'm not kidding. I was devastated. It was like being rejected at the middle school dance when you finally got the nerve up to ask the "cute girl" out on the dance floor and she stone cold disses you...

Those non-descript uniforms are ugly, ugly and very ugly. It's like looking at them through a "Phog" no pun intende

For any of you Conner Frankamp fans, which I'm sure 99% of you are, here is a video you may or may not have seen.

This is a one-game highlight from last season when Conner outscored the entire Perry Ellis-led Wichita Heights team.

Sorry but I just can not get all that excited about a hot-shot 6' High School shooting guard. It seems I've seen thousands of them over the years with only a handful panning out.

However, if Self says he's a player, I trust his judgement far more than mine in these matters.

Really? A hot-shot shooting guard? Wait til you see his PG skills. He only scores that much because he HAS to! If you watched the U18 championships, you would know better... The kid has an all-around game.

Ya. You need to watch some videos on this kid. He led the USA team (loaded with top notch recruits) in scoring. Honestly, I'm more excited about his future at KU than any other recruit we have coming in. He shoots lights out (above 50% from 3, I think) and he can create his own shot off the dribble. The kid is a beast. Some recruiting experts say he is the best shooter in high school basketball. If you can't get excited about that, I wonder what excites you in a recruit.

In discussing the "new" uniforms during the game; I think I remember KU playing in "all red" uniforms a couple of times, maybe once at Allen and maybe once in St. Louis! Is this true or am I mistaken. Also, did KU once play in an "all yellow" uniform? Old age memory loss setting in, I think

I'm thinking we wore yellow a few years ago against a no name team on the road that wasn't covered on TV. Anyone confirm this?

I'm sure you mean crimson uniforms.

As an alum of the University of Northern Colorado, where Boyle got his first head coaching job, I was fortunate to see his son dance at time outs years ago. CU had their first ever sell out crowd for a home opener this year. He's a great coach.

I think he was showing his team how to flop

Waiting for the copy of the Dunk from Doc...seem to have video of everything else, why can't you produce that one.

Jesse, this feature is awesome. I especially enjoyed reading the articles from earlier in the season from opposing beat writers heaping praise on the team and especially the magnificence of AFH. Keep up the good work.

Jesse, I love these posts! Keep it coming!

Go back to the regular uniforms. They are iconic and should not be messed with. Same uniforms every year, different players, same result- a KU Win and opponent Loss!!!

The uniforms looked like practice jerseys that were turned inside-out.

and that the cat threw up on.

I love the article about Hudy and the S&C program at KU. Ialways knew we were a leader in that category (just look at our players), but I never realized just how cutting edge the program at KU actually was. My only question: Since the football team works out at a different facility, do they have another set of the same equipment or are they more "lo-tech?"

Key Q: Is Drew going to have to quit coaching, because of the concussion?

Jesse, I really wish you would not make any mention of the conclusion of the '97 season. Horrible nightmares still wake me up as that game still runs through my mind....in slow motion. That game remains the most crushing experence.....ever....in anything!

The uniforms are terrible, inherently plain, even butt ugly. Fans can't see name or numbers, can't even read KANSAS. The only thing that can be made out is the Adidas logo. Those things should only be used as a threat, as in, if you all play that way for another half I'm putting you back in the ugly ass uniforms.