A Bang Up Job

Recently a KUSports.com reader inquired about what it's like when a photographer is run over by a player diving out of bounds. I think getting smashed by anything is typically a bummer, but in this case the only answers I can give is that it sometimes hurts, it's usually expensive and it's often a little awkward with all that sweat involved. 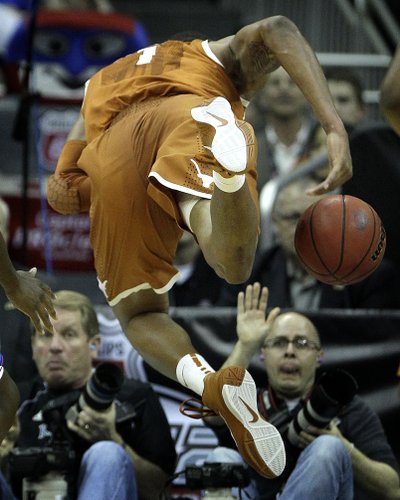 Texas forward Gary Johnson (1) dives into a row of photographers as he tries to keep a ball in bounds during the first half of an NCAA college basketball game against Kansas for the championship of the Big 12 men's basketball tournament Saturday, March 12, 2011 in Kansas City, Mo. (AP Photo/Charlie Riedel) by Charlie Riedel

Pictured in the accompanying photo, which came from the first half of the Big 12 tournament championship game, is Texas forward Gary Johnson, out of control and barreling out of bounds. Sitting at left is Jeff Jacobsen, the Kansas Athletics photographer, who if I had to describe his look, I would say appears both vigilant and at the same time a bit skeptical of the situation. As for me, the one with his hand up and tongue sticking out, I don't know what I had hoped to achieve, but I will say that neither did any good to stop Johnson's momentum. On the UT Athletics website Johnson is listed at 6 foot 6, 238 pounds. KUSports.com has me in at 5-7, 160 pounds.

Jeff, who has been shooting sports for over 40 years had the veteran's presence of mind to grab his gear and move with the hit while absorbing it. I on the other hand barely lifted a finger other than the "halt" motion and ended up on my back. I guess I should be thankful I was sent to the floor by hands and arms rather than a shoulder.

Rarely is anyone seriously injured in these situations and it's more often the equipment that ends up on the disabled list. If I were writing this column 20 or 30 years ago we'd be talking about all the bruised and bleeding players limping away from the hard, metal-framed Nikons and Canons with edges sharp enough to knock over a liquor store with. Now it seems like anytime you look at your gear the wrong way it's a $500 repair.

Last week in Tulsa chief photographer Mike Yoder and I had two cameras go down. One gave us an onboard error message during the Boston game and the other was heard screaming for help shortly before being landed upon by Thomas Robinson during the Illinois game. 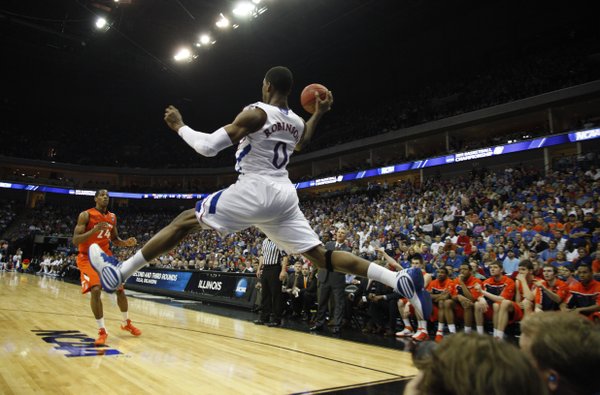 Kansas forward Thomas Robinson turns to fire a pass as he soars out of bounds against Illinois during the first half on Sunday, March 20, 2011 at the BOK Center in Tulsa. by Nick Krug

No matter if the hits are taken physically or in the pocket book, you still have to keep shooting. The experience brings to mind a recent conversation with a friend whose wife is in the later stages of pregnancy with their first child. When I asked how everything was going he replied, "I'm learning how to take a charge."

You guys do a fabulous job capturing the essence of the game. Keep up the great work and geeeesh try and stay safe!

Nick - I sometimes find myself paying more attention to the photos you take than the article itself......the photos doing a better job of telling the story than the words. Your work is outstanding!

I remember my first day as an intern at channel 6. Chris Ronan, who was the sports director back then, told me that if I ever broke a camera, I would be fired on the spot.

Are you the Wyoming Mike Rigg? Where's channel 6?

I shot for CSU basketball a little bit about 3 years ago, I'll say at least you are in a stealthy (although immobile) sitting position during basketball games, and the players aren't wearing helmets. In all of the football games you've shot you must have had a couple real scares.

I was shooting a CU football practice one day. My good friend was shooting for The Daily Camera. He and I flanked another shooter along the sidelines. The guy (kid really) was shooting one of these hulking 600mm L series lenses on a mono-pod. He was still a student so I have no idea how he could afford the $10-15k for the lens alone. But he never saw it coming. A fade route right at us. The kid was focused on the line of scrimmage and the tight end (Devree I think. He was huge. Come to think of it, I think Cody Hawkins floated the pass.) ran through him like a train. He not only shattered the lens, but also snapped off several chunks of a $5k camera body and sent the kid to the hospital with all sorts of cuts and bruises to his face, hands arms. and who knows what else. Judging from the sound, he surely had a concussion. Neither the player, or the shooter saw the other until the actual impact. Devree(?) started to put his hand out to help him up, but people were already there telling the kid to stay down. Player back to the huddle. Practice continued.

Full pads. helmet. momentum, the works. My buddy and I still cringe when we talk about it. He literally could've been killed.

Keep your head up Nick. I'd hate to be without your amazing stuff here.

Nick, Nice job of writing to go along with your great photos.

I saw a picture or maybe even a poster quite a few years back, it was the inside of Allen Field House, it was empty and the only light really showing was coming in through the windows and shining down on the court. It was before the big Jayhawk was at center court. Oh to be able to find that, it was one of my favorites all time.

I just wonder if you think a picture is worth the career of an athlete. You all sit way to close to the end of the court for my thinking. There isn't a game goes by that a player doesn't end up in your lap banging into your camera equipment. It is amazing to me more players are not seriously hurt by the stupidity of you camera folks need to be right at the edge of the court. They make telephoto lenses for a reason surely it would not hurt for you all to be back away from the basket and court line to give the players a little room to step out of bounds. Please lets care more about the players then the pictures.

I really hope, Jhawkerman, that this was intended to be in jest. If not, it's likely to grab grand prize for all-time most stupid post here, and there have been some doozies. You really think the photographers CHOOSE where they sit?? On what planet? If they weren't close to the court, there wouldn't be pictures, newspapers and magazines wouldn't sell as well, and the poor guys with the cameras would be in the unemployment line. And the likes of Lew Perkin$ certainly aren't going to let them have courtside seats.

If you really have that little clue about how the real world works, please give the computer back to your mother and go back to the basement.

always like to see the freeze frame action that any game affords... good work Nick

You all need to be issued old school football gear.

Yeah. Like they need any more garbage to carry around. One of the reasons I got out of the sports photo business is because I hated carrying all that shiz.

Jhawkerman, the photographers sit where the media relations staff allows them to sit. If they backed up in most arenas, they'd be blocking the walk way in front of seats. Photogs have been shooting in AFH since 1955. I don't remember any serious injuries, but I guess you know better than anyone who is actually involved in the process. From now on, the J-W will just draw stick figures for you. While you're at it, stick the cheerleaders and mascots far, far away from the court, too, right?

bring back the photojournalist blog!

I'm not actually a sport's fan, but I am a fan of photography and good writing. I am thoroughly enjoying your blog, Nick. Nice work!