Gill Can Be His Own Man Now

Before kickoff last Saturday, fellow staffer Kevin Anderson and I strategized about how we would cover the game and among other things, how we might cover the team's entrance onto the field.

We agreed that because it was the first game under a new coach, Turner Gill would likely lead his players out as a symbol of unity and a subtle statement that a new era had begun.

What I envisioned happening was possibly a chesty walk, or maybe a tightly formed mass, shoulder-to-shoulder in rows, jogging behind their inspirational leader.

In case you weren't there, none of the above took place. Instead, a big inflatable tunnel went up and soon after Gill and the team congregated inside and took the field but not before a "stage director" held them back. When the cue finally came, Johnathan Wilson led the charge through the haze created by the smoke machines carrying the Jayhawk flag. 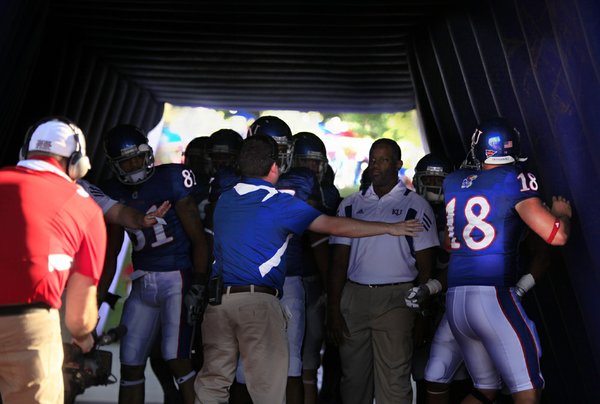 Turner Gill and the Kansas Jayhawks are held up inside an inflattable tunnel before taking the field against North Dakota State. by Nick Krug 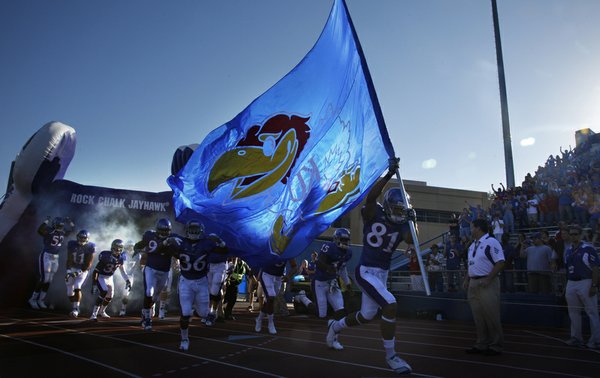 Johnathan Wilson leads the charge onto the field carrying a Jayhawk flag. by Nick Krug

Admittedly, it looked kinda cool from a visual standpoint but — whatever it was — it wasn't Turner Gill or at least not the Turner GIll that everyone has been talking about. I don't believe for a second that he had anything to do with the pregame theatrics.

In a mopey week after a loss like Saturday's, plenty have speculated about what the sudden retirement by athletic director Lew Perkins might mean for a guy like Gill. One way of viewing it is that it's bad news when your meal ticket checks out before you get your feet planted in the new office.

Another way of looking at it is that it's the best thing that's ever happened to him (short of landing the job). 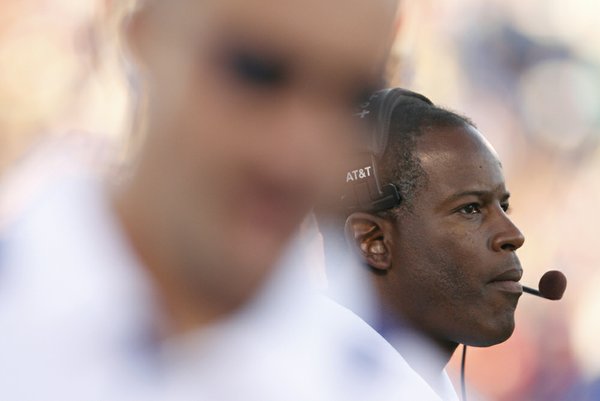 Kansas head coach Turner Gill watches from the sidelines during the second quarter against North Dakota State. Gill's first game as the Jayhawks' head coach proved to be a tough outing as they fell to the Bison 6-3. by Nick Krug

Anyone who could once tell him to jump, sit or stand just left the building or got declawed by the Chancellor, who I'm guessing has bigger issues to worry about than the nice-guy football coach and his rough start.

In that regard, things couldn't be cushier. He is beholden to nobody and now has carte blanche to run his team the way he sees fit: Not barreling through smoke, but unified and with substance, which has been the gist of his credo since he came to town.

I agree that might not be Coach Gill's personal style, but I also think he understands that the theater of the pre-game is not really his main concern and probably doesn't really affect his team and their play. Just like I bet Coach Self doesn't care what plays on the video board during the intro of the players.

I will add though that the flag is way too big. They should have a smaller one that can be held with one hand so the team can really just come charging out of the tunnel.

I wasn't there but I watched it on TV. And from the looks of that picture with the flag leading out the team, that was the most fired up I saw them the whole evening.

I love Gill. Think he was a good hire and his style will necessitate his own speedy players being recruited before it works.

But I at least expected the guys to be on fire for the opportunity to hit someone other than a teammate.

All I'm looking for on my TV Saturday afternoon is for the players to be excited, show a lot of effort and have some life. If that happens, I'll be happy regardless of the outcome.

(of course, a win would be great, too)

Can we just let this guy take pictures?

OK who then should have been hired? Tubberville struggled in his first game and look at the talent he had to work with, returning RB, QB, WRs, and a good D too. Not combarable sorry.

You said it, KU came off a great one year run. I love KU, but I know our place in football. Yes I want them to continue growth and be someone to be recond with every Saturday of every year, but you must understand that one season dosen't make a traditional powerhouse.

you do realize Gill's 20-30 record at Buffalo IS a winning record if you view from the correct perspective.

Stats are not everything. And we should feel lucky that we got Gill.

Custer was not scalped at Little Big Horn. He was one of only two cavalrymen not notably mutilated, the other being Keogh. Please don't revise history.

Okay... it's time to chill. Overreaction week has come and gone... It was one game, albeit an ugly one. But it's not like much more revered programs than ours have lost an opener to a I-AA team in the very recent past.

The people that are calling for Gill's head after week 1 are emotionally out. of. control. Seek help! Get real, suck it up and expect a tough year. It was going to rough no matter who the coach is. I'm behind Turner Gill and my Jayhawks! You can tell me how he's doing in 3 years... don't try to do it in a week.

If you know you're football you know that these things take time. Especially when you're running such a vastly different system than the previous regime. The players Mangino wanted to run his style of game are different than Turner Gill's will be. Mack Brown would be screwed at Texas if he had Ohio State's players. Coaches recruit to fit their system and style of play. It's going to take a cycle of recruits going out and new coming in that fit the system. Especially on offense. Then we can judge Turner Gill as a coach. We'll get a few hints now and then but you can't really say with certainty how good of a coach Gill is until year 3.

In year 3 he'll have mostly his own recruits and then he'll own it. Good, bad or otherwise it's all on him then... not now. There should be noticable improvement by year 3, and if Gill is a good coach we're a Top 25 team in year 4. If Boise State can do it we sure as hell should be able to get it done by doing it the right way.