Fresh faces: Go behind the scenes as Nick Krug explains one of his recent photos

A "sportrait" as you can probably guess is a fun little nickname the photo world has given to certain portraits of athletes. Not all portraits of athletes are "sportraits" and not all "sportraits" are of athletes because some of them involve NASCAR drivers. Kidding.......kinda. The term most properly identifies a style of portraiture that you commonly find with athletes. When I say this I'm talking about dramatically-lit scenes reminiscent of the bright lights of the field or arena. Then there's the player, holding his or her respective ball, bat or device and leering down into the camera with the intensity that only a true competitor can muster. If words don't suffice just imagine what Rambo might look like clutching a football to his side rather than a machine gun. 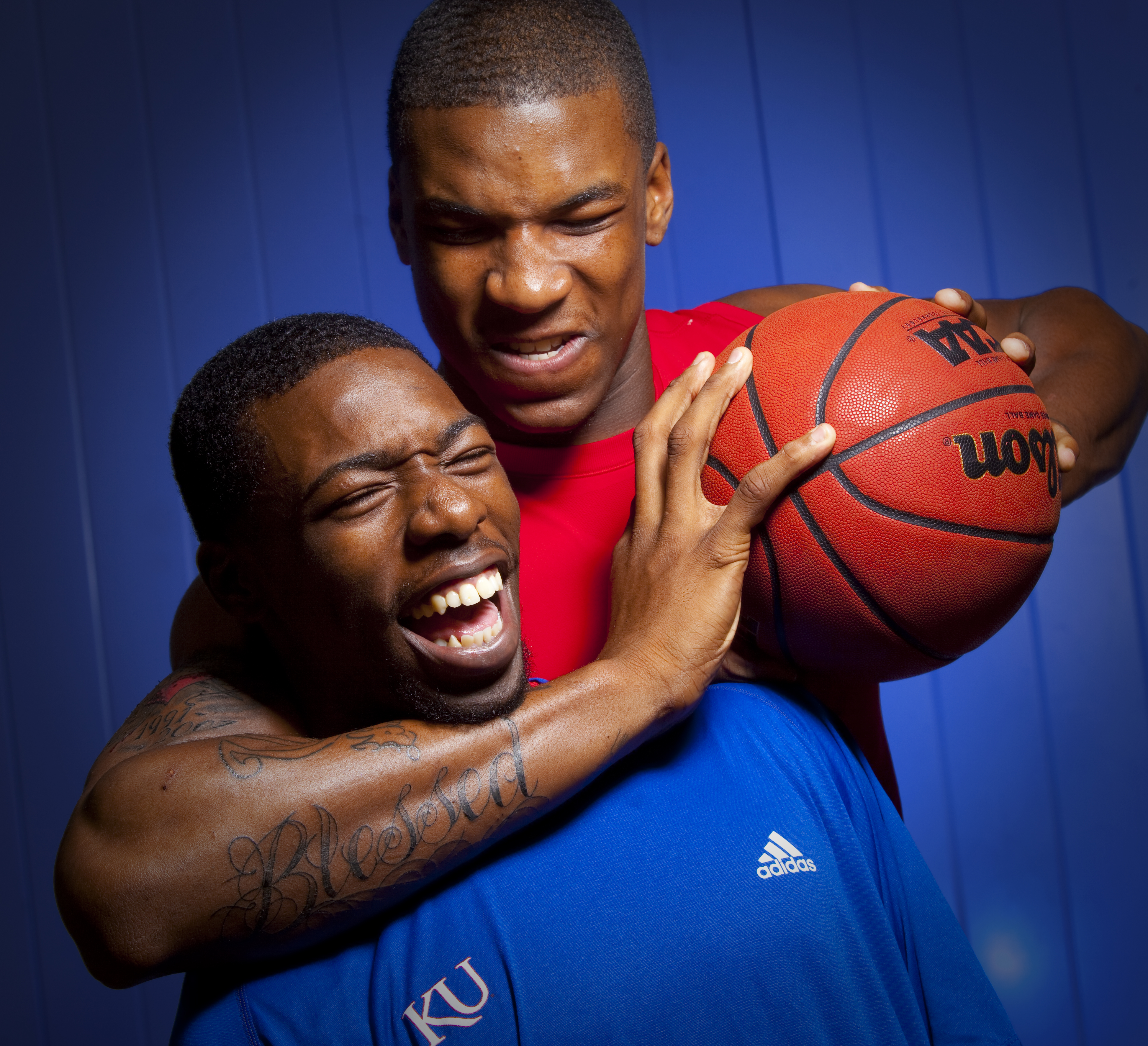 Usually when these photo sessions occur I've spent about two hours preparing the lights for a shoot that can last all of a minute and a half. Needless to say there's not a whole lotta "How you like the food at Mrs. E's?" going on. It's pretty much "Hello." "How are ya?" "I'm so and so and I'm here to do such and such." The strobes pop a couple of times. We shake hands. They're out the door and I start untangling wires and turning off lights. To their credit, a few minutes isn't enough time to really get to know a person to the point that you one, trust them enough to let down your guard, and two, feel comfortable enough with them shooting your portrait for tens of thousands of people to see.

All this considered, imagine my surprise when Elijah Johnson and Thomas Robinson stroll inside the Horejsi Center with smiles on their faces, poking fun at each and most importantly, relaxed. Bedore was doing a feature story on the two of them being newbies, roommates and good friends. We started out with the all too familiar and predictable back to back pose and it just didn't have a feel like it was going anywhere. Now in the past I've suggested a less serious approach and it's fallen flat because I hadn't built up enough of a rapport or because the player didn't want to be seen any way other than dominant. With these two, once I told them about the story, they started with headlocks and transitioned to noogies with ease.

What stood out to me is that unlike most of these situations the two walked in with smiles and became animated and active participants. I know that the traditional image of confidence is standing tall, chin raised with a tight jaw, but the more I work around athletes the more I believe it's best expressed by the ability to simply let loose. 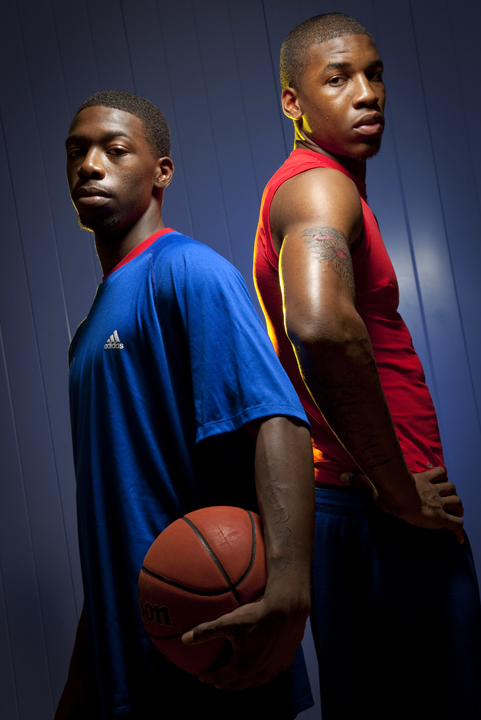 I like your style Krug. you have a well trained eye. Gla dyour taking our photos.

I hope this becomes a regular feature.

Did you take any photos from further back that might show all your equipment setup?

Did you have anyone stand in so you could get all the lights adjusted properly before the Elijah and Thomas showed up?

I didn't step back to shoot the whole setup this time but that's something I think I could incorporate sometime in the future whenever the situation permits. Maybe even a video.

As far as the modeling of the light goes I didn't have anybody around to assist me this time but Keegan, Bedore and the other fellows are good sports about standing in when needed.

We plan to make the blog a regular feature from what I understand so if you have any questions you'd like me to address or photo issues to explain just email me and I'd be happy to consider them for a post.

Aaaaaaaaaahhhhhhhhh!!!! It's about time you jive turkeys gave Nick his own column! He's starting point guard on my all-media team. The Gint is riding the pine.

I hate you Nick Krug!

did you just call me a jive turkey?

How about some technical geek stuff like what kind of equipment you shoot?

I've always said I'd buy a book of your work. Any chances of that in the future? I've also said I'd even volunteer to do some editing just to see the whole collection. Most times, theres some really good stuff that never makes it out of the office.

I love that picture.

I have been appreciating your photos for some time now and am glad to have you step out from behind the camera to talk with us. You are among the best in the business and LJW and we are fortunate to have you.

How about a picture of you?

I keep coming back to this article. The top picture just gives you way more insight into who these guys really are than the posed picture below. I really appreciate it.

I can take better pictures with my cell phone

"best expressed by the ability to let loose."

I couldn't have said it better myself. When I experienced Late Night as an out-of-state (football state at that) freshman, which was topped off by Pollard's proposal to his gf, that was when I knew KU was a special place - top to bottom, academics, people, Lawrence, sports, and all of the intangibles that make college and college towns.

Props to the online editor and to Nick for hatching this new venue.

Question 1: have you snapped any Nudetraits of the fair sex? Some one with your kind of camera chops not photoging the fair sex in all its fairness seems unchivalrous to the ladies; like Helmut Newton only doing furniture and house wares photography.

Question 2: Do you ever know when you take a picture that it is going to be terrific, say the way a basketball player knows as soon as he releases some shots, that they are going down? Both shooting a camera and shooting a basketball seem to have a lot to do with eye and touch.

Question 3: Can cropping make an average photo into an really good one, or is a really good photo necessary to start with and cropping mmerely makes it a little better?

Question 4: Do you take tons of pictures to get a few good ones, or are you able to take a few to get what you want.

I have a technical question.....what do I do with all these little flashbulb thingees once I pop them out of my Brownie Starmite???? :]

Here's a challenge for you. Go over to Allen and see if you can make the new garage connection and the exterior of the practice building look acceptable. If anyone can do it, you can!!!

Life goes on, but immortality is but a click away!!

Thanks for the questions. I'll do my best to answer.

Nick, don't get me wrong...I love that you cover KU Sports, but, man, you have "Big-Time" talent. Surely Lawrence Kansas isn't your final stop?? Heck, if Bill James can start in "Larry K" and become a national icon, you can too!!!

Bill James, Garrison Keillor, Nick Krug: it can be done!!!!!