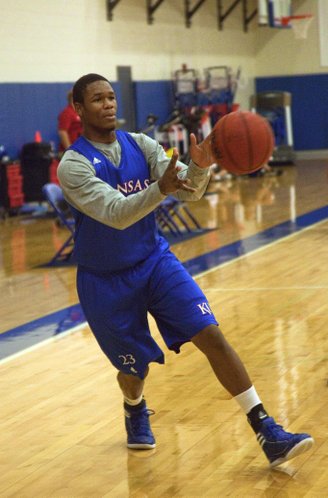 Kansas University freshman Ben McLemore scrimmages with his KU teammates on Saturday, August 4, 2012, at the Jayhawks’ practice facility near Allen Fieldhouse. McLemore tweaked a hip-flexor early in the practice, but should be ready to play when KU begins its European exhibition on Tuesday. by Richard Gwin

Kansas coach Bill Self opened up his full practice to media members Saturday, as the Jayhawks scrimmaged for about 90 minutes with all the European rules (24-second shot clock, wider lane, 10-minute quarters, international basketball) before spending the last half-hour or so installing plays and going over zone offense.

Jeff Withey — To me, he was the best player in the gym, and it wasn't close. Defensively, he looked just as good as he was a year ago, blocking shots both at the rim and also away from it. On one instance, with time running down in the third quarter, he blocked Kevin Young's shot about 18 feet from the basket. Young retrieved the ball quickly and put up another shot, and Withey quickly bounded up to block that shot as well. The defensive effort even drew kudos from Self.

Offensively, Withey is trying to assert himself more, as he knows he'll be relied upon to score this year. Though he went after defenders when he received the ball in the post, I didn't see him attempt too many jump shots. His offensive game is still developing and isn't a finished product just yet.

Elijah Johnson — Nothing much to report with Johnson. He had a steal and dunk in transition and hit a few outside jumpers. It was basically what you'd expect from him.

Perry Ellis — Ellis this was the newcomer who impressed me the most. Offensively, he's further along than any other KU freshman. What he does with the basketball just appears instinctual. When he gets it in the low post, he knows what he's going to do and does it. He also has an ability to get by his defender off the dribble. Nothing about his game appears mechanical, and the game never appears to be going to fast for him. He also had a highlight throwing a high-low pass from the top of the key to Withey. Ellis spotted him, then threw a lob pass that was a bit to Withey's back shoulder, though Withey was still able to lay it in easily. Afterwards, though his team had just scored, Ellis still apologized to Withey for the pass. Ellis also looked comfortable shooting mid-range jumpers in the 15-to-18-foot range, making quite a few of them.

Naadir Tharpe — The sophomore looks to be making an effort to become more of a floor leader. He was one of the loudest encouragers on the floor and also a guy that was trying to help out younger players. He had one nice pass in the lane that drew a "Way to play" from Self. Still, there were moments where Tharpe — everyone at practice called him "Na" — was reckless. During one transition, he sprinted all the way under the rim before jumping in the air next to two defenders. Facing away from the goal, he forced up a blind scoop shot over his head that wasn't close. He was one of the primary ball-handlers, though, and on this team, that should earn him minutes.

Andrew White — I thought White was the second-best freshman after Ellis. Much like Ellis, White didn't appear to be affected by the speed of the game. For the most part, he made good decisions and smart passes. He also has good size at 6-foot-6. His best play came in the second quarter, when he went way above the rim for an offensive rebound. Though White is known as more of a shooter, it looks like he could provide KU a boost on the offensive glass as well. About that shooting ... White missed every three-pointer I saw him take — and he probably took around 10, with most of them coming from the right corner. Remember, it's just one practice in August, but I'd be lying if I said I wasn't surprised that he didn't make one.

Rio Adams — The freshman struggled Saturday. Many of his issues came from trying to make difficult passes in traffic, which resulted in turnovers. One time, while driving, he also tried to get through a group of defenders by attempting a behind-the-back dribble, which resulted in an opponent steal. His shot was off Saturday as well, as one of his three-point tries bounced off the backboard, and he also was briefly in Self's doghouse for not hustling onto the court during an offensive drill. The one thing Adams does have going for him is that, during the scrimmage, he was trying hard. On one loose ball, he was the first to dive on the floor, earning praise from the KU assistant coaches. Adams also picked Johnson's pocket once in the backcourt, which stood out as the highlight of his day.

Milt Doyle — Like Adams, Doyle appears to be struggling with the quickness of the game. He tried to force too many passes into traffic, which many times resulted in turnovers. Doyle did show flashes of offensive skill Saturday, taking a couple dribbles before hitting an 18-foot pull-up jumper on one possession and later draining a three from the corner.

Zach Peters — The freshman doesn't look timid. He's not afraid to throw his body around and bang with the bigs inside. He also didn't look fazed even after getting blocked by Withey a couple times, which I thought was a good sign. One concern for him this year could be fouls, as he struggled to play defense without drawing a whistle.

Landen Lucas — He knocked down an 18-footer, but overall, it was a quiet day for him. He appears to be another guy still getting adjusted to college basketball, as coaches were on him a few times to go full speed up and down the court.

Kevin Young — Young was silent for the first half then really good in the second half, which reminded me a bit of what we saw from him last year. He appears to be a bit more athletic this year, skying high for an offensive rebound that I'm not sure he could have gotten to a year ago. He also showed nice touch in the post, spinning to a left-handed hook from about eight feet that went straight through. Young also routinely was one of the first players down the floor on offense, which resulted in at least one easy bucket for him. It looks like KU will rely on him more for rebounds this year with Thomas Robinson out of the lineup.

Ben McLemore — I missed the first quarter because of another assignment, so I didn't get to see McLemore, who didn't play past the second quarter because of a minor hip ailment. When I first walked in, I asked who was looking good, and McLemore's name was the first mentioned by Journal-World beat writer Gary Bedore. McLemore hit two threes and an inside shot in 10 minutes. Also, with McLemore in, the blue team outscored the red, 30-15, in the first quarter.

• One other note I found interesting: Self stopped practice at one point to instruct the guys on inbounding the basketball.

It sounds like a tiny thing, but really, it's not. The person inbounding the ball has to call a play and make sure that everyone hears them.

Self told his guys to call that play while still standing on the court. The reason? If the player goes out of bounds to call the play, many times an official will hand him the ball, and the five-second count starts before the team's play is called. If a player calls the play from on the court, then there is no danger of the official handing him the ball and starting the count.

I thought it was a pretty interesting example of Self's attention to detail on something that many of us would never even think about.

Be sure to check back to KUsports.com over the next week and a half for coverage of the KU men's basketball team's exhibition games in Europe, as I'll be heading to Switzerland on Sunday.

The plan is to live blog each of the games from the arenas, starting with Tuesday's noon CST game against the Swiss national team.