Let's take a look at the Kansas football team's much-talked-about fake punt attempt in Saturday's 54-16 loss to Texas Tech. A reminder of the game situation: The score was tied 10-10 with 6:08 left in the second quarter, with KU facing fourth-and-13 from its own 16.

Right away, Coach can tell this is a punt return for Texas Tech by the positioning of its players.

How does he know? Look at each of Tech's players pre-snap and you can do the same.

If a Tech player is going to rush the punter, he gets in a runner's stance, putting one foot in front of the other like a sprinter would.

If a Red Raider is blocking, he squares his feet up to the line to get ready to run backwards.

Ready to test your skills? Just for fun, here's a punt from later in the game. Can you tell me how many Texas Tech is rushing on the play? 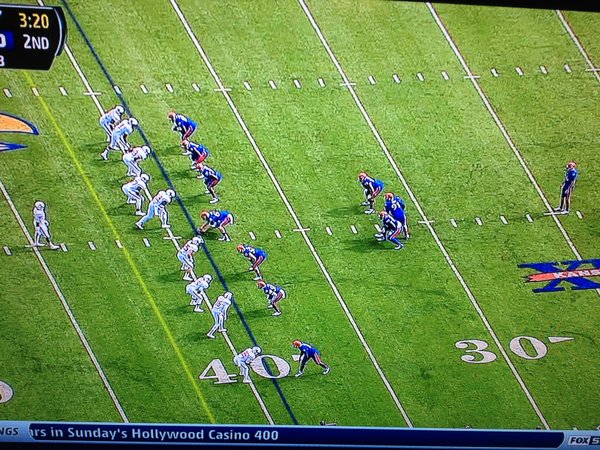 If you said three, you are correct. Each of the players that had one foot in front of the other made it upfield, while the other players blocked.

Let's get back to the fake punt.

Coach says the two players going upfield for Tech (red circles below) are called "check kick" guys. Their job isn't to block the punt ... it's to make sure that KU punter Trevor Pardula actually kicks it and no fakes are on.

Coach notices that Tech isn't necessarily sound in its formation, though. He says when his team sends two "check kick" guys, it sends one guy from each side to make sure that they funnel the punter back to the inside.

Whether they know a fake is on or not, most of KU's line does a good job of clearing out space. They sprint downfield to cover the punt, dragging nearly every Tech player along with them.

That leaves KU three players in the shield (blue circle below) to block the two "check kick" guys.

From here, Coach says it's hard to tell why the play went wrong.

On his team, when a fake punt is called, every one of his players on the field knows it, as it is signaled to the team based on the call and cadence of the snap count.

From the video, Coach says one of two things happened to KU: 1. The three shield players didn't know a fake was on, or 2. They all failed miserably in trying to execute blocks.

One reason Coach doesn't believe the shield players knew about the punt is the action of No. 99 Tedarian Johnson, who is on the far left of the shield. When the Texas Tech player rushes toward him, he protects his inside shoulder. That makes sense on a normal punt, as he wouldn't want the Tech player to get to Pardula.

If Johnson knew it was a fake, Coach says this should be an easy block. Johnson could take a couple steps to the outside shoulder of the rushing Tech player, then pin him to the inside. The other personal protector (No. 91 Shane Smith) could then flow upfield to serve as a lead blocker on the play.

Notice at the top of the screen, No. 73 Damon Martin also doesn't try too hard at a block on Tech's other "check kick" guy, who eventually makes the tackle on the opposite side.

It's still hard for Coach to tell if it's bad execution or bad communication, as KU's shield players do run hard after the play is a few seconds in, making it difficult to know if they knew the fake was coming.

Either way, the Jayhawks had three players to block two, and they ended up blocking neither guy.

From Jayhawk Slant's Hawk Talk Recap from Monday night, here's what KU coach Charlie Weis said about the fake punt: "I think even when you are backed up in that situation and the look wasn't identical (to what team wanted to run the fake), if the two things that weren't done were done, it would have been an easy productive play."

Now, you know which two things he was talking about.

As for the situation is was called — on a fourth-and-13 at KU's own 16 — Coach said this might be a better play for fourth-and-seven or fourth-and-eight, which wouldn't put as much pressure on KU to make a big play.

Also, the field position definitely is a factor.

"It’s also an area where a team is not expecting a fake either, so it might work out even better," Coach says. "When we watch special teams film every week, we look for certain fakes or different things we can use against a team.

"Now, I’m not sure the head man would let us call it on our own 16-yard line, but it is something that we look at every week and try to have different wrinkles in."

The bottom line for this fake from KU?

"Big-time risk-reward," Coach says, "but it definitely had a chance."