For those who didn't check out last week's blog, this box score is meant to give some of the most relevant stats so we can take a deeper (and better) look into the numbers. 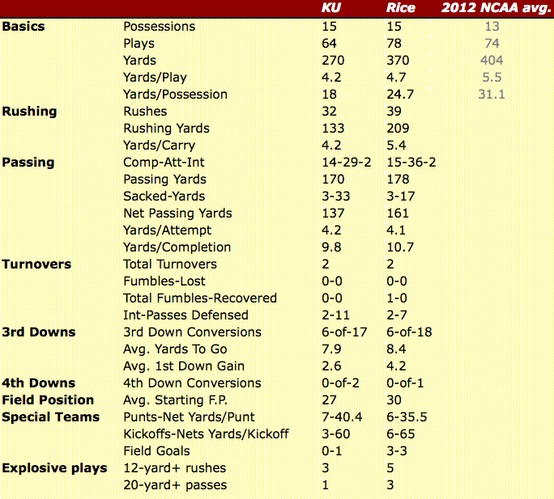 Here are a few takeaways from the box score: 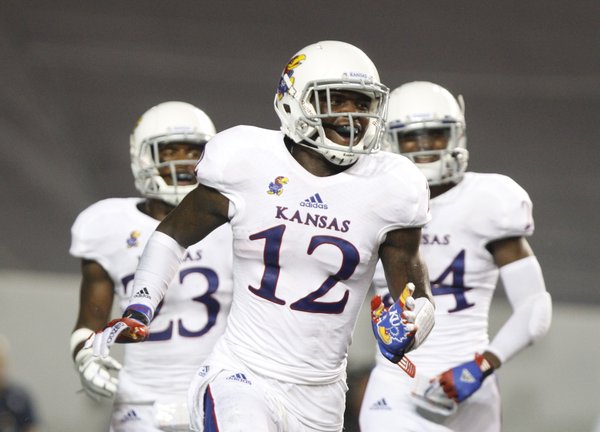 Kansas cornerback Dexter McDonald celebrates his interception during the fourth quarter on Saturday, Sept. 14, 2013 at Rice Stadium in Houston, Texas. by Nick Krug

Not only that, KU's secondary is making plays on the ball. KU's 11 passes defensed (pass breakups plus interceptions) is a huge number that hints the Jayhawks should me more competitive defensively this year in the pass-happy Big 12. Through two games, KU's 7.5 passes broken up per game leads the conference, while Dexter McDonald is tied for fourth nationally with five pass breakups of his own.

Remember, in our "new" box score, sacks are counted against the passing totals, as technically, they are passing plays. Through this prism, KU's passing numbers go from bad to cover-your-eyes awful.

The Jayhawks mustered just 4.2 net passing yards per attempt after posting an identical 4.2 net yards per attempt against South Dakota the week before. Notice that if you look at yards per completion, KU's passing numbers jump up to 9.8 yards per catch. So what does that tell us? In short, KU isn't completing enough passes. For the second straight week, quarterback Jake Heaps failed to complete more than 50 percent of his throws, and once again, costly drops kept KU from having a more efficient passing game.

Trevor Pardula had another great game

Again, if optimism is your thing, KU punter/kickoff guy Trevor Pardula is another reason to believe KU can be competitive in Big 12 games. After seven punts, the junior still maintained a healthy 40.4-yard net punt average, and that was a big reason KU stayed close in the field-position game (KU's average start was its own 27; Rice's was its own 30). Pardula also blasted three more touchbacks, and through nine kickoffs this season, his six touchbacks are already more than KU had in all of 2012 (five in 47 kickoffs).

KU's offensive numbers were even worse considering the opportunities

In 2012, during games between two FBS teams, the average squad had 13 possessions per game. The Jayhawks had it 15 times against the Owls and still never managed to find a rhythm. To be fair, one of those possessions was a kneeldown at the end of the first half, but the numbers are ugly regardless. KU managed just 18 yards per possession, which is barely half of what an NCAA team averaged a year ago (31.1 yards per possession). Remember, that was against a Rice defense that allowed 52 points in 14 possessions to Texas A&M two weeks before.

It was a weird game for KU's running game

The last few years, KU has had success in the running game by getting modest gains to keep the chains moving. Against Rice, the Jayhawks were the total opposite of that, featuring a boom-or-bust tendency while playing without backup RB Taylor Cox. 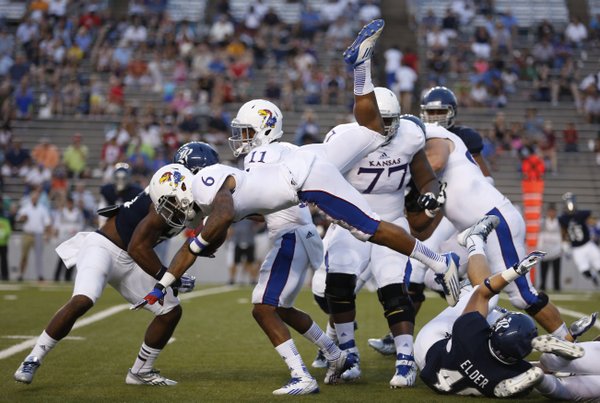 Kansas running back Darrian Miller is upended by Rice linebacker Nick Elder during the second quarter on Saturday, Sept. 14, 2013 at Rice Stadium in Houston, Texas. by Nick Krug

KU had three rushes of 12 yards are more, and all were by James Sims, who has been more of a grinding back during his career. On the opposite side of the spectrum, though, KU had seven rushes that went for no gain or a loss, indicating the Jayhawks' offensive linemen were getting overpowered too often.

That made for some weird stats. KU's 4.2-yard-per-carry average might be more acceptable if the Jayhawks were better able to avoid losing plays. Instead, KU averaged just 2.6 yards on first down because of all the run stuffs, and that put the team in tough situations on third downs, where the Jayhawks' average gain to go was 7.9 yards — much too high for a team that is still trying to find itself in the passing game.

The pick-six was a killer

The box score above shows this game wasn't dominated by Rice. The Owls had slightly better numbers across the board, but statistically this game was close enough for KU to win if it had a positive turnover margin.

Unfortunately for the Jayhawks, Heaps' pick-six in the first quarter put the team in a huge hole. Bill Connelly has done the math to compile an NCAA football chart for equivalent points — the number of points a team is likely to score on a drive from a certain yard line.

When Heaps threw the pass, KU was on the Rice 46 — a yard line worth 1.62 equivalent points to KU. The interception return for TD then gave the Owls seven points, and the ensuing kickoff was a touchback, putting KU on the 25 — worth 0.01 equivalent point.

Do the math, and that was a 8.61-point swing because of a single play — definitely enough to swing the balance of a game that the Owls won by ... nine points.

For me the most troubling aspect of this analysis, and the game, is that our running game was so bad. It was the one ting we all assumed we would be able to do, but clearly the offensive line is not what it was promoted to be. I guess it's not so easy to replace guys like Hawkinson, Zlatnick and Marrongelli after-all. Grunhard has his work cut out for him. If we can't run OR pass then it's gonna be a very long season.

This is what I saw all night. The o-line was physically over-matched. Very troubling.

Shake it off. The Hawks will look a lot better come Saturday.

Given the opponent I would hope so.

Jesse, for your sake I hope there are some wins in this team, because at some point nobody will want to read analysis of a losing team. You have your "work cut-out for you".

Jesse, under the "KU's pass offense, once again, was pretty bad" section, you need to change the last sentense to read: "For the second straight week, the offense failed to complete more than 50 percent of his throws, and once again, costly drops kept KU from having a more efficient passing game." Naming Heaps made it sound like his poor throwing led to the drops. No, it was definately due to poor catching skills of our recievers.

Jesse, could the twelve yard loss be the stupid backward pass that went out of bounds? I'm not sure who takes credit for a botched lateral.

You are exactly right. I had forgotten about that. Technically, that would be a run, so I've updated the numbers above to reflect that. KU's running game gets dinged a little bit, and KU's pass numbers improve slightly with the correction.

Oh, that was a bad one. Not sure why that play was thought to be a good one...

I wasn't just the O-line that got over powered either. There was one bubble screen relatively early in the game where the receiver had no chance to run with the ball because the CB drove the other, non-catching receiver back into the receiver and overran both of them.

Looked like something straight from a football version of the Bad News Bears. I don't think I witness something even that alarming during the Valesente years!

If Philip Gaines was the CB who did that, he is the preseason C-USA defensive POY so he's probably one of the 5 best corners KU will face all year.

Jesse...really love the new box score analysis...It puts some common sense into the numbers and helps explain some of the anomalies found in traditional box scores.

Keep up the good work!

If you think we will be going to a BCS bowl this year, then you are a homer. If you think that there has been absolutely no improvement whatsoever from last year, than you are blind.

Still sticking with my prediction of 4 wins.

I don't think I've seen anybody predicting a BCS bowl, just lower-tier bowls that come from having 6 wins. But I'm not one of them. I don't see us going bowling this year unless something huge changes.

I will grant you some improvement, significant in the defensive backfield, but there's also some regression in the o-line.

In any case, I'm impressed with your optimism. I don't see where two Big 12 wins, or really even one, come from right now. Hope you're right.

Mainly, I am just expressing frustration with the Negative Nancy's who think that Coach Weis has made no improvements. I can't believe that some people are calling for him to be fired already...

What will 3 wins equal?

Jesse. Whats the chance that you could graph the stats over the course of the season? I'm thinking KU's performance vs. the NCAA average (for each one of the 5 NCAA stats a 2 line chart). It would be interesting to see if, over the season, KU is improving against the NCAA benchmark.

For example, KU's yards per play starts the season below the NCAA average but finishes the season above the average. I'd say that was improvement, even if it doesn't change the won/loss record.

Of course on a week by week basis the quality of the opponent makes a material difference (the stats vs South Dakota compared with the stats vs OU). But, since the NCAA stats are an average I would expect them to include weaker and stronger teams as well.

Over time (season), it would be interesting to see the trends against the 5 NCAA averages.

Yeah, I can try that in one of the future weeks. Should just be a matter of compiling all the previous numbers.

Jesse, how many incompletions did we have on first down? That would also contribute to the poor 2 yard average.

Rice was concentrating on the run (8-9 in the box) and menacing Heaps with an inside blitz when the run did not take place. Needed a mobile QB. Rice played option read all day and we did not. Kansas would have killed them as the over-committed inside. Charlie needs an OC.

I am not even close to going out to the garage to look for my pitchfork and torch. The arrival of CW has done a lot of good things for the Jayhawk football program and I definitely see improvements.

But...if Charlie doesn't realize that his offensive scheme and play calling are on the hot seat...he's fooling us and more importantly he's fooling himself.

Jesse - this is great stuff as usual. Can we get a coach's analysis of why the running game isn't working? Is it the poor blocking, defenses stacking the box, missed assignments, or a combination of everything? The combo is my guess.

Tony is just too explosive to not get the ball. He should have at least 15 combined touches minimum. Not many players can turn an eight yard button hook into a seventy five yard touchdown like he did last Saturday. With our lack of ability to run between the tackles against rice for the majority of the game, we need to use his speed to stretch defenses.