KU quarterback Jake Heaps has a 'hot spot' ... and here's where it is 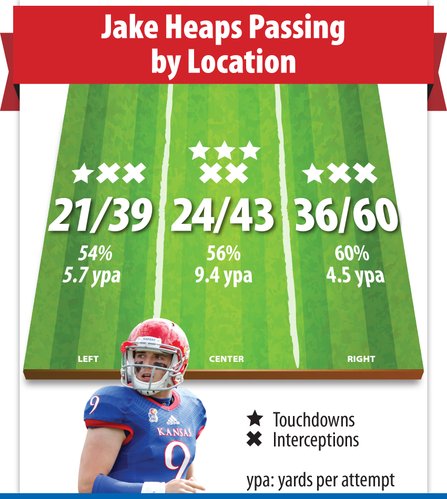 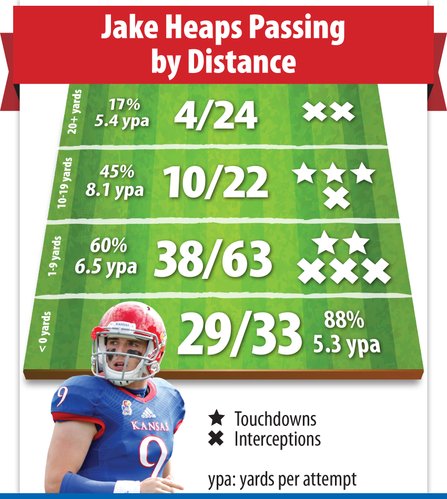 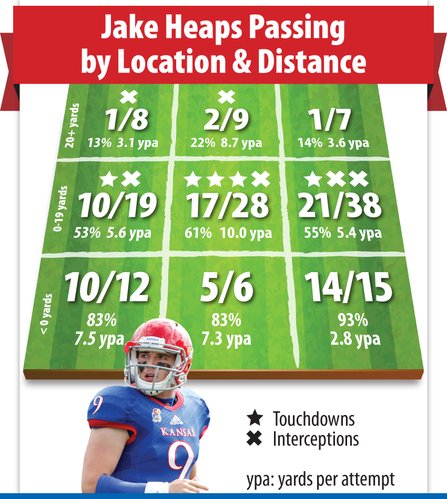 Show this to Charlie!

Do the passing locations correlate to certain receivers as well? Meaning does Tony run his routes in the middle of the field where he is most comfortable? Not saying all his routes are there just that the middle could be his best place. And this would apply to any of the receivers. In other words breaking down where they are getting most of their catches.

Definitely could be an entire blog for another time.

Yep that's what I was getting at. If who was running the route made a difference in the outcome. I mean I guess really a more talented receiver would be expected to catch more balls for a higher percentage and higher yards. Just seems like several players have hands a stone. Good stuff man! Thanks!

This is a fantastic breakdown, Jesse! Thatnks for doing things like this week after week. Out of curiosity, we all know that Weis is one of the hardest working coaches around. But do you ever think things like this get lost or overlooked due to the "forest for the trees" effect? Simply put, do you think Weis overlooks data like this because he is too focused on breaking down plays, studying individual plays, routes, passes, etc?

You would think with this kind of data we would start to see more passes over the middle. After reading this, I'm surprised we haven't and it makes me wonder why.

I'm not sure exactly what all is looked at by the staff, but I know a lot of self-evaluation takes place during bye weeks.

Very interesting breakdown Jesse. Perhaps it can't be quantified statistically, but in your opinion, would you say the long ball hasn't worked for Heaps because he lacks the strength-accuracy combo to make connections on the bombs or because receivers have dropped/run bad routes?

Does your breakdown include whether Heaps is on the move while passing or sitting in the pocket? I've been thinking that Weis should resurrect Hank Stram's moving pocket to improve Heap's protection and give time plus play action to free up the receivers..

Don't have that in the blog above, but I have the data. Maybe something to look at in future weeks.