Here's what type of player KU is getting in Hunter Mickelson

Six-foot-10 Arkansas transfer Hunter Mickelson told the Journal-World on Thursday he will be transferring to play for Kansas. The big man will have two years of eligibility for KU starting with the 2014-15 season.

Here'a a look at Mickelson's statistical profile from his two years at Arkansas (stats from KenPom.com). 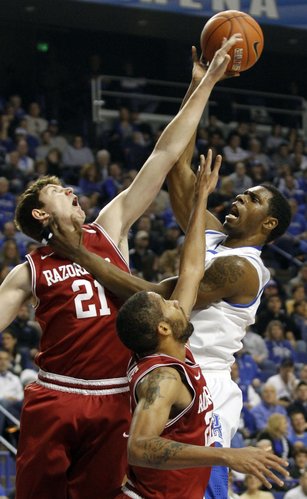 Kentucky's Terrence Jones, right, puts up a shot under pressure from Arkansas' Hunter Mickelson (21) and Marvell Waithe during the first half of an NCAA college basketball game in Lexington, Ky., Tuesday, Jan. 17, 2012.

• Shot-blocking: Mickelson — with a body type much like former KU center Jeff Withey — also is a talented shot-blocker. Though he played in less than half of Arkansas' minutes during his two seasons there, he rejected 8.2 percent of opponents' two-point attempts last year (66th nationally) and was fifth nationally in block percentage during his freshman year (13.5 percent block percentage).

• Finishing at the rim: Hoop-Math.com's shot logs indicate that if Mickelson is an especially effective scorer around the rim.

The big man made 74 percent of his dunks/layups/tipins a year ago, and his offensive profile at the rim is similar to that of Withey did this past season.

Essentially, Mickelson isn't great at creating his own shot at the rim, but he's exceptional at finishing passes from teammates when they get it to him in close. 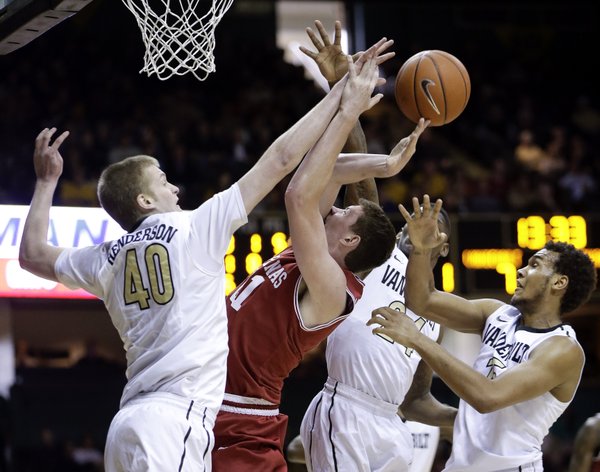 Arkansas forward Hunter Mickelson, second from left, loses the ball as he tries to shoot among Vanderbilt defenders Josh Henderson (40), Dai-Jon Parker (24) and Kevin Bright, right, during the first half on Saturday, Feb. 9, 2013, in Nashville, Tenn.

• Jump-shooting: The big reason Mickelson wasn't even close to Withey's offensive production in 2012-13 (Withey was at 1.137 points per possession ended, while Mickelson was at 0.97) was two-point jump-shooting.

While Withey was well above the NCAA average of 35 percent on two-point jumpers (40 percent), Mickelson struggled on those same shots, making just 23 percent of his attempts.

The good news for KU is that Mickelson has shown some signs of being a good jump-shooter. He made 36 percent of his two-point jumpers his freshman year, and in a small sample size, he improved his free-throw shooting from 52 percent his freshman year to 80 percent his sophomore year.

• Getting to the free-throw line: Mickelson is not an aggressive offensive player, as he had just 20 free throws last season compared to 166 field-goal attempts. His free throw rate (FTA/FGA) of 12.0 would have ranked last on KU's roster last year, lower than even seldom-fouled players like Elijah Johnson (24.2) and Naadir Tharpe (17.4). Mickelson averaged just 2.0 fouls drawn per 40 minutes a year ago, and since KenPom began keeping the stat in 2005, Self has never had a rotation big man with a fouls-per-40 number that low. 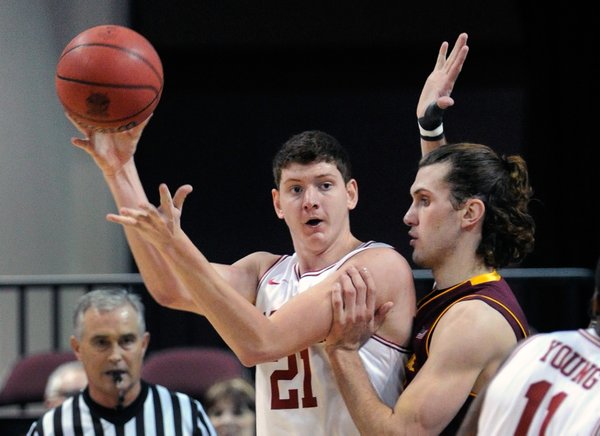 Arkansas' Hunter Mickelson (21) looks to pass the ball with Arizona State's Jordan Bachynski (13) defending during the first half of agame at the Continental Tire Las Vegas Invitational tournament on Friday, Nov. 23, 2012, in Las Vegas.

In Mickelson, KU gets a player with tremendous upside defensively as evidenced by his high block percentages. Mickelson's biggest weakness is his two-point jump shooting, though other statistics indicate that he should have the skill set to improve in that area. Based on his free throw and fouls-drawn numbers, Mickelson also appears to be a guy that might need to develop toughness — a trait that quite a few players (including Withey) acquired under Self. A year sitting out could help in this area as well, as it will give the 245-pound Mickelson a year in Andrea Hudy's weight program.

For Self and KU, adding Mickelson provides some insurance in the frontcount in case Joel Embiid emerges to becomes a one-and-done player (ESPN's Chad Ford listed Embiid as a potential top-five pick next year if he continues to develop [subscription required]). This also seems to indicate a preference for Self to continue to recruit tall shot-blockers in a college basketball age where many teams have elected to play small.

Going back to 2008-09, KU has had one high-level shot-blocker in the starting lineup (Cole Aldrich, Withey) for four of the last five seasons. With Embiid and Mickelson signed on, the Jayhawks have the potential to be covered at that position for at least three more seasons.

Studies have shown the best shot-blockers have more defensive value than the best defensive guards because of their ability to bring down two-point shooting percentages, and Self seems to have found a comfort zone with these types of players. Though Mickelson still has plenty to work on offensively, he seems to be in a good location if he hopes to improve his toughness while thriving in a defensive system that will allow him play to his shot-blocking strengths.

Jesse, I don't know how you pumped this out so quickly, but thank you so much for this fantastic analysis. Hopefully Mickelson can fulfill a role similar to Sasha Kaun on the 2008 Champ squad!

This is actually good stuff! He does seem to have light legs. Hopefully he'll learn quickly how not to foul like the Great Withey. Mikey tends to deny the ball with force, like most of blockers. Nevertheless, he's got upside potential. Sharpe Tharpe will make him look better.

When Withey first arrived at KU and fans saw him for the first time in action, it left a lot of people scratching their heads and doubting he would ever contribute significant minutes. I know I was one of the doubters and boy was I wrong. I hope Mickelson comes in ready to work and transform himself into a premier defender.

Withey's 2.7 fouls per 40 minutes is astounding considering he was National Defensive Player of the Year.

Embiid is not a OAD- I would be very upset if he is.

I beg to differ. If Embiid develops at the same pace he is a lottery pick even with a stacked draft next year.

Too bad Mike Anderson had to be a d!ck and not let him out of his LOi when he took the helm at Arkansas. Sounds like we may have had this guy two years ago.

If I'm not mistaken, he must give up one year of eligibility with the transfer regardless of any so called "release".

A player only has to redshirt if he takes a class at a school. Jeff Withey attended Arizona for one semester and therefore had to sit out an academic year before becoming eligible to play at KU. Tyshawn Taylor was originally committed to Marquette and when Tom Crean took the Indiana job, Taylor was released from his LOI to Marquette and allowed to enroll at KU without having to sit out a transfer year because he had not taken a class at Marquette yet. Morris twins, Xavier Henry and Josh Selby were also released from LOI's to other schools and allowed to enroll at KU without sitting out because they had not taken classes at their original schools.

A little hard for me to get excited about this one.

Was hopeful of J. Okafor, CL. Alexander, Looney, Myles Turner, Tr. Reed WAY more good big men out there than is being let on. In fact, thought to be strenght of the '14 recruiting class and then you have them for 4 years and not just 2.

Just "praying" that this time we get the PG that most of us think that we've been targeting.....Josh Perkins.

I doubt this hurts our chances of landing Okafor. Even if Embiid returns for his Sophmore year, Okafor would start with him in the frontcourt with Mickelson, Traylor, and Lucas providing depth on the bench. I think Perry Ellis, who went 2 for 3 from 3 this past season, will be polished enough offensively and quick enough defensively to play the SF position in the 2014-2015 season.

Perry Ellis will NEVER be a 3 at KU. Marcus Morris was much more equipped to play the position in college and spent maybe 5 minutes at the 3 for KU in his 3 years and that was against some scrub team his junior year.

Dooley was the lead recruiter on Perkins, as I understand it, so I don't know if that will affect it at all. Hopefully it doesn't.

But can the kid play golf?

Thanks for the prompt analysis, Jesse. Once again, Self bets his cards on 5th year experience and development. This hasty acquisition appears to have been a no-brainer for our coaching staff. Hunter is probably salivating at the opportunity to get into Andrea Hudy's training program and on the practice courts with emphasis on a very different style of basketball. By age 22/23 this kid will develop into one hell of a man.

Amazing how Self continues to pick up project kids...and his success rates with them. Great player research.

Jesse, as always love the basketball analysis, but wondering if Tait get pink-slipped? Coach Weis says this is a big recruiting period with JC's in particular, and twice as many coaches on the road, and yet not a peep since Traevohn's commit. Obviously, there have been no other commits, but total silence? At least you provide the basketball coverage.

Not to worry. Matt will be getting back from vacation in the next day and will have all the NFL Draft/KU football articles you're looking for ...

I have a question....how do you commit 5.3 fouls per forty minutes when 5.0 gets you seat on the bench??

I know, I know..it's based on a prorated total of his actual fouls per playing time, but I got a kick out of reading it....I could have used thast extra .3 in my foul-plagued high school BBall career!! :)

PS The good news is he will instantly be 7'-0" tall when he crosses the Kansas State Line!!

Not so fast. Danny was committed to not ever being 7'.

Equals slow and can't play D so he hacks away instead.

Translated - Never been taught to move his feet on D, so he reaches. Fortunately, he has been reported as moving fairly well for a big white guy, so there is lots of hope for him in the HCBS School of BBD.

I've watched Hunter since he was in 7th grade and he's a great kid and was lied to by Anderson and imho, not treated right. We were all happy at first when he chose the Hogs but quickly regretted that decision out of love for this kid. I wish him well in Kansas and if given a chance he will not let you down. Good luck

Several of us Hog fans that have known Hunter since he was a young kid and watched him play all thru high school are in the process of buying KU sports attire. Shirts and caps. We will support ya'll and Hunter. We would love nothing more than to see him excel at Kansas and make Anderson look stupid for the way he played Hunter and to show the critics that it was the coaching and not the player. Go Kansas

HE WILL GET USE TO PLAYING HERE

Hunter transforms from a Hog to a Hawk, takes wings and will soar. Love the blue collar vibe. Hunter will be a tremendous asset taking care of the work in the trenches that makes the difference in getting the W's. Welcome aboard Hedge Hawk!