All statistics courtesy of KenPom.com and are current as of March 24. 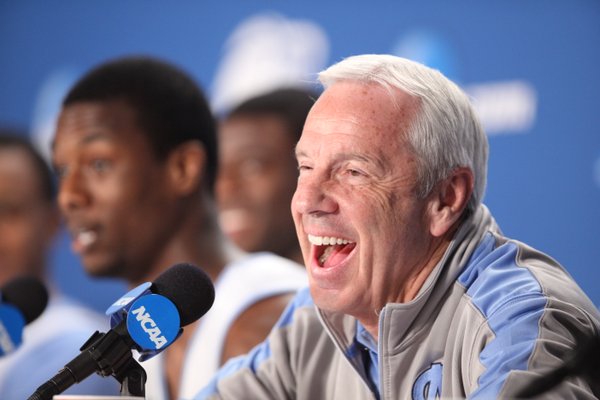 North Carolina head coach Roy Williams laughs as his players talk about video games during a press conference on Saturday, March 24, 2012 at the Edward Jones Dome in St. Louis. by Nick Krug

This might be a surprise, but this year's North Carolina team is actually better defensively than it is offensively (though it ranks in the top 20 nationally in both categories).

The Tar Heels are ninth in adjusted defensive efficiency, mostly because they excel in a few key areas.

For one, UNC almost never gives up free throws. The Tar Heels are No. 1 in the nation in defensive free-throw rate — a statistic that measures how many free throws a team gives up compared to the number of opponent field goals it allows. UNC's opponents have averaged just 13.6 free throws per game, which is even more impressive considering the Tar Heels play at the ninth-fastest pace in the country. 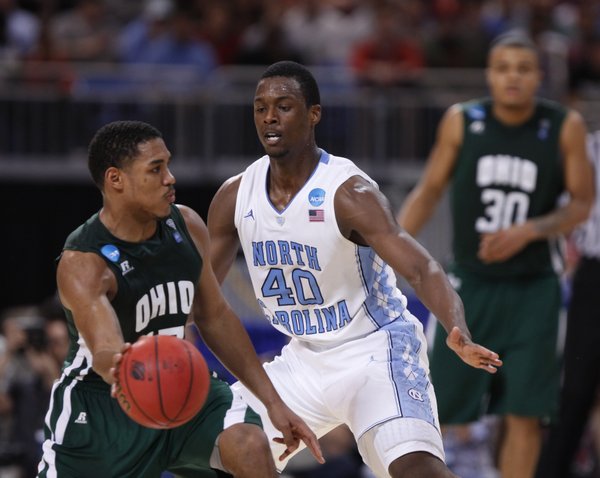 North Carolina forward Harrison Barnes defends against a pass from Ohio guard Nick Kellogg during the first half on Friday, March 23, 2012 at the Edward Jones Dome in St. Louis. by Nick Krug

North Carolina's defense also has been able to limit good shots because of its size; UNC comes in as the tallest team in the nation, according to average height per position. 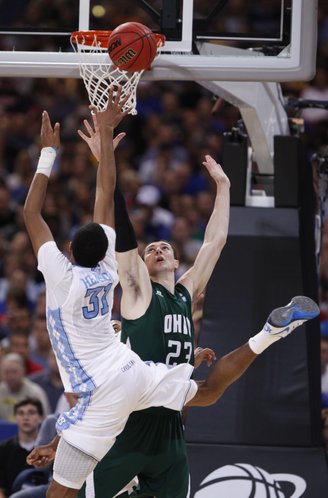 North Carolina forward John Henson puts up an off-balance shot over Ohio forward Ivo Baltic during the second half on Friday, March 23, 2012 at the Edward Jones Dome in St. Louis. by Nick Krug

Defensively, UNC is not a turnover-forcing team, creating giveaways on just 19 percent of its possessions (259th nationally).

The Tar Heels also tend to allow a lot of three-pointers. This season, 36 percent of opponents' shots against UNC have been threes (273rd nationally) and 33 percent of the opposition's points have come from behind the arc (24th-highest split nationally). This trend was evident Friday, when 45 percent of Ohio's shots (32 of 71) and 55 percent of its points (36 of 65) came from three-pointers.

Let's start with the player that nearly everyone has been asking about this week: point guard Kendall Marshall. 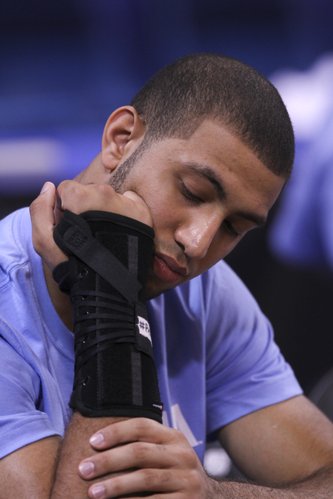 North Carolina guard Kendall Marshall wears a brace on his wrist during practice at the Edward Jones Dome in St. Louis. by Nick Krug

The 6-foot-3 sophomore fractured his wrist last week, and the decision on whether he'll play will be a gametime decision.

Marshall is one of the best passers in the nation, contributing 44 percent of his team's assists while he's on the floor (third nationally). Earlier this week, UNC coach Roy Williams said Marshall was the best guard he'd ever had at attacking teams after they score and pitching ahead to teammates. 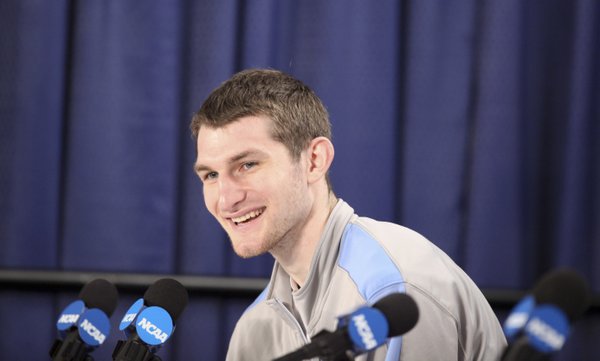 North Carolina forward Tyler Zeller smiles as he talks about facing the Kansas big men during a press conference on Saturday, March 24, 2012 at the Edward Jones Dome in St. Louis. by Nick Krug

The senior has kept his two-point percentage high (55 percent) despite having to take on a huge offensive role for his team. He also draws 6.4 fouls per 40 minutes (34th nationally) and makes 82 percent of his free throws.

Six-foot-10 forward John Henson's role is more that of a defensive stopper. The junior blocks 10 percent of the opponents' two-pointers while he's in the game (24th nationally) while also pulling down 26 percent of the available defensive rebounds (21st nationally). He's actually shot more two-pointers than Zeller this year but has only made 50 percent of his shots from there (194 of 386). Henson also has struggled at the line, where he's just a 52-percent shooter.

UNC small forward Harrison Barnes takes the highest percentage of his team's shots (29.1 percent of them when he's out there), and though he's not as efficient as Zeller, he's still solid. 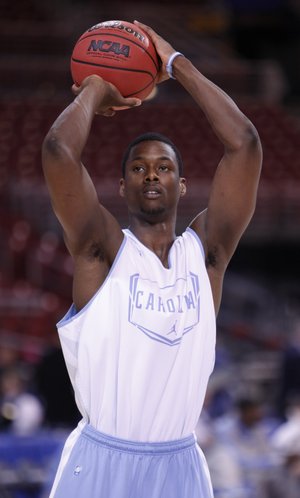 North Carolina forward Harrison Barnes puts up a jumper during practice at the Edward Jones Dome in St. Louis. by Nick Krug

Reggie Bullock — a 6-7 guard — is UNC's other main three-point threat.

The sophomore has made 38 percent of his threes this year (65 of 171) while keeping his turnovers down.

Bullock suffered a knee injury during Friday's game against Ohio, but he's expected to play against Kansas.

Sunday's game sets up to be a terrific matchup between two of the best frontcourts in the nation. 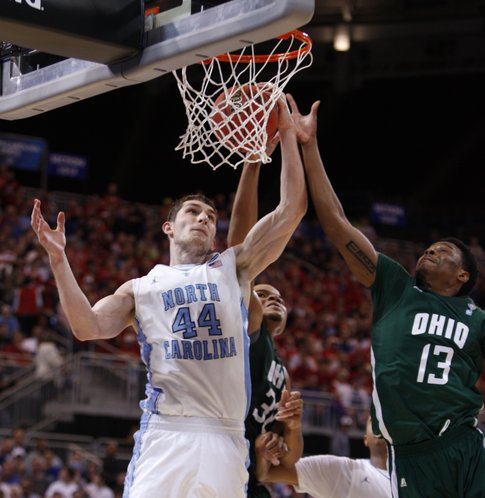 North Carolina forward Tyler Zeller pulls a rebound from Ohio defenders TyQuane Goard (32) and T.J. Hall during the second half on Friday, March 23, 2012 at the Edward Jones Dome in St. Louis. by Nick Krug

There will be a few storylines to watch:

1. UNC gets 60 percent of its points from two-pointers (14th-highest split nationally), while KU is the No. 1 team in the nation in two-point defense (40 percent). Which team will be better at its strength Sunday?

2. Though KU is also reliant on two-pointers (55 percent of its points come from twos), there's a strong possibility that UNC's strong interior defense and ability to avoid fouls will make it tough for KU in the paint. Will the Jayhawks be able to create and make open threes?

3. Will KU be able to get back in transition? UNC thrives on getting easy points, and Zeller is one of the best big men in the nation at beating his opponent down the floor for easy looks. KU's Thomas Robinson also has been poke-happy lately, trying to knock away defensive rebounds from opponents instead of immediately running to get back on D.

With a limited rotation, KU coach Bill Self might have to use most of his screaming to urge his team to sprint back defensively. 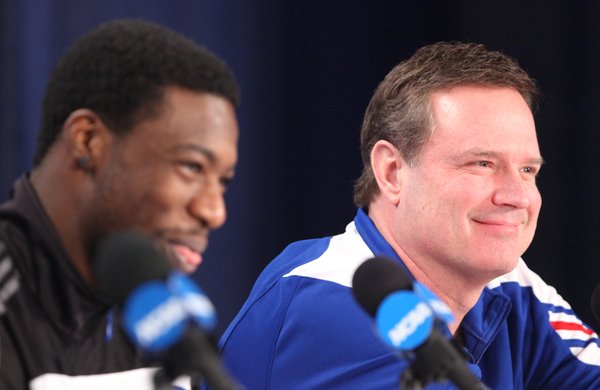 Kansas head coach Bill Self smiles next to Elijah Johnson as his players speak to his personality during a press conference on Saturday, March 24, 2012 at the Edward Jones Dome in St. Louis. by Nick Krug

UNC's quick pace also should force Self to go to his reserves a bit more than he might in other games. Self has critiqued himself all year, saying that he's needed to sub more.

He'll have to be extremely disciplined to follow his own advice in KU's biggest game of the year.

Releford will need to step up his D. And the D should watch for Barnes shot at the elbow.

"For one, UNC almost never gives up free throws."

Yeah, when you can slap a kid in the eye and not get called for it, it tends to help your average.

I am betting the free throw disparity is on par with the Ohio game. I'll put the over/under at UNC 25 attempts, KU 8 attempts.

It would be nice if the Jayhawks finally hit a decent % of their freethrows and 3 pointers. In a negative context: Maybe it's good that N. Carolina doesn't get called for fouls very often, since KU has shot so poorly from the line recently. >Frees and threes. Will the Jayhawks excel, or will it be their downfall? TRob and Jeff need to start making those bunnies they've been missing. And time to raise those season 3 point averages TT, EJ and TC.

Exactly right and in line with what Self said regarding breaking out of a slump by making the easy (bunnies) ones,

If Marshall plays, over play him on defense way to the his right to force him to use his left hand as much as possible.

For Barnes, do just the opposite and overplay to his left, the direction he predominantly drives.

Zeller hasn't met someone with the size that Withey has and can be thrown off his game by continuous contact.

Henson has to be screened off the boards because of his size.

If the refs continue to allow the heavy contact, North Carolina can be broken...they are long and lean, but no true heavyweights.

My honest opinion is we win this game if BenMac and Jamari were eligible, however, I think our lack of depth and true athleticism finally catches up with us, unless A] Tyshawn totally turns it around from the previous two games B] Elijah gets and stays hot from the outside 3] TRob quits audtioning for the NBA and gets back to the type of Kansas basketball that made him a POY candidate in the first place.

Sorry, Jayhawk Nation, North Carolina by 9, but what a great year!!!

Oakville, I agree with you 100% and I hope we are wrong. Great year either way!! RCJHGOKU

With twelve teams left I correctly predicted the next 4 winners. At that time, I also predicted UK and KU would both make the Final Four (along with Louisville and Ohio State). Come on, Jayhawks, today is your day to prove how good my prognosis abilities are. Dang it. If I were only a betting man.

NC St came in touting offensive rebounding and low turnovers and played up to par in both. We still won despite our poor shooting. Can we expect to let the tar heels play up to par and still pull it off?

Defense mentality,,,,,It's hard to put into words, but best to describe by example. When a team is behind the idea to stop the other team from scoring becomes paramount. The defensive mentality is that to win you;ve got to get stops. You simply expect to score if you stop the other team from scoring. With the lead, the teams mentality is to score to maintain the lead. As long as you continue to score your defense doesn't matter. Total defensive stats are misleading.....especially for those teams that are good enough offensively to find themselves with the lead most of the game. Bill Self made an interesting comment about his teams loses have been a coincidence of the team scoring easily in the beginning of the game, The last two game, with the terrible offensive play, have been victories because of this teams defense. For Bill Self the challenge is going to be getting his team to play great offense and great defense at the same time.