A few summer links in case you missed them ...

• While doing some research on West Virginia's football team, I stumbled onto this video, which was displayed on the WVU football athletics site. Basically, it's KU coach Bill Self introducing KU (and Kansas) to West Virginia.

Which made me wonder: What's the first thing I would tell West Virginia fans about Kansas if they knew nothing about it?

I came up with two things:

I'm guessing there'll still be at least one of those during KU's first trip to Morgantown for basketball.

• Former Kansas guard Mario Chalmers made his way back to Lawrence last week for his annual golf tournament, but before that, he was in New York City to do multiple interviews after winning an NBA championship.

This video from The Daily gives an interesting, behind-the-scenes look at his day in NYC, which includes more wardrobe changes than I would have expected.

• For those folks interested in memorabilia ... a 1915 KU basketball jersey is being auctioned off online.

The suggested value for it: $30,000. Though right now, if the price holds, it looks like someone could get a steal for under $10K.

During the chat, Lundquist brought up this year's KU-Missouri game at Allen Fieldhouse. (He starts talking about it at the 26:35 mark.)

"That's one of the great games I've ever seen, and more because of the setting, Matt," Lundquist said. "Allen Fieldhouse, if I had to pick my favorite college basketball arena, that would probably be it."

That's pretty high praise from a guy that has seen a lot of arenas and college basketball over the years.

• Producer Kevin Willmott and former Kansas basketball player Scot Pollard are continuing to ask for KickStarter donations for their proposed independent film, "Jayhawkers," which would examine the story of KU coach Phog Allen, how he recruited Wilt Chamberlain and how that changed Lawrence.

For more information on the project, check out the video below.

• And finally, the Kansas City Chiefs are having a contest to determine the National Anthem singer for their Aug. 24 preseason game against Seattle, and one of the potential singers has deep KU ties.

Here's his official tryout video from his audition at Arrowhead, and those who want to vote for him can do so at the same link.

Another of the five finalists, Mandy Peck, also lists a connection to KU in her bio, saying she has performed the National Anthem at Jayhawk events.

I didn't know anything about an Anthem contest for the Chiefs. Darn. I have a BFA and MM from KU, and sang the Anthem for a Nuggets game back in April.

Go for it man! 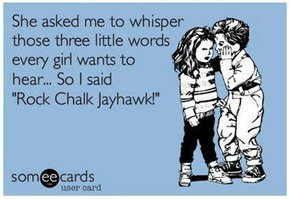 Thank you for the updates...always interesting to hear early-on coach speak. by notjustbread