Layup defense and how it affects KU's perimeter players 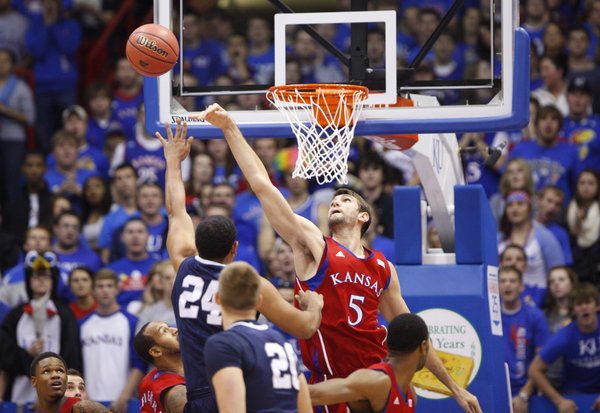 Kansas center Jeff Withey swats a shot from Washburn forward Zack Riggins during the first half on Monday, Nov. 5, 2012 at Allen Fieldhouse. by Nick Krug

There have been a few good pieces lately on Kansas center Jeff Withey's impact defensively, but I wanted to point out another facet that KU coach Bill Self touched on briefly during his Hawk Talk radio show Monday night.

Almost entirely because of Withey, KU's opponents simply are not getting easy shots.

Here's a look at the top five teams in the nation this year in layup defense, according to the cool nerd site Hoop-Math. 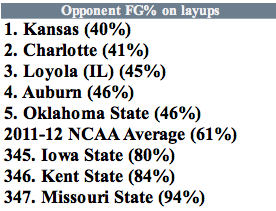 The reason for KU being the best defensive layup team, of course, is blocked shots. Here's a look at the top five teams in the nation at blocking layups. 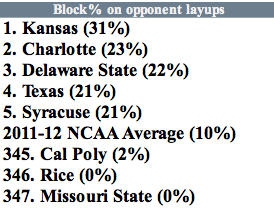 As you can imagine, eliminating an opponent's easy shots is a great way to build a defense ... and we can reflect that with some simple arithmetic.

Here's how many points that would be produced by opponents with 145 layup attempts against the defenses above, based on those defenses' season percentages. 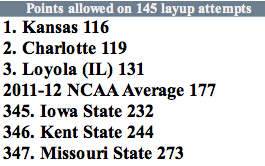 But, at a base level, this analysis would suggest through seven games, KU is saving itself about 8.7 points per game over the average NCAA team on layups alone.

It turns out KU's shot-blockers are having an even bigger impact than that. KU's opponents have made just 29 percent of their two-point jumpers (NCAA average is 35 percent) with the Jayhawks blocking 12 percent of those shots (seven percent is NCAA average).

KU's two-point defense has been so good this year it's led to an extremely rare stat: So far, opponents are shooting better from three-point range against the Jayhawks (35.5 percent) than two-point range (35.2 percent).

That statistic is pretty remarkable if you think about it.

This all makes me believe that KU might want to rethink the way it plays defense this year.

Obviously, a lot has been made of KU's perimeter players getting beaten off the dribble by opposing guards.

Here's the breakdown of opponents' shooting percentages against KU.

Looking at the field-goal percentages on the right, the three numbers aren't too far apart. The only difference is that teams are getting three points for the bottom row but only two points for the top two rows.

Let's look at this another way. If opposing teams got 100 of each of the above shots against KU, they would score 80 points in layups, 58 points on two-point jumpers and 108 points on three-pointers.

That means at this point — statistically — KU's defense is much better off daring teams to take their chances inside the arc. (And conversely, opposing teams are better off taking as many threes as possible).

KU has a unique defensive weapon this year in Withey, as not only is he an elite shot-blocker, he's also one that doesn't get into foul trouble (1.1 fouls per 40 minutes).

Though it would be a luxury for KU's guards to not get beaten off the dribble, the real goal should be to recover quickly and defend the three-point line at all costs.

If the early season is any indication, there aren't many teams that are going to find success scoring over KU's athletic big men, even if they get it all the way to the rim.

Never in my wildest dreams did I believe Withey would end up being as valuable as he is right now.

2 years ago I thought he was an embarrassment. Basically the twins were a mess as freshmen. These facts give me complete confidence that Perry Ellis will be a stud in 2-3 years.

Iowa State is what really surprised me.

Iowa State's defense gets some strange results. They only allow opponents to get 18% of their field goal attempts at the rim, which is a very low rate. But when opponents get their, Iowa State doesn't do much to contest, only blocking 3% of opponent shots at the rim. On two point jump shots, Iowa State is blocking 14% of shot attempts, which is a pretty high total for teams that don't have someone like Withey. The Cyclones are fascinating. Their defense has been producing results like this for the last several seasons.

Very informative and interesting, Jesse. Finally a way to give some credit for altered and blocked shots combined.

This is one of the coolest and most informative statistical analyses I have ever seen for basketball. It gives us a clear picture of how paying attention to statistics can directly impact a basketball game. I wonder how prevalent this kind of analysis is with most college coaches? I would assume Coach Self has all of this information at his disposal and uses it to his advantage, but it would be really cool to know how much they actually look at this kind of information.

Thanks, Jesse. I love reading about this stuff.

This stuff is very enlightening from a numeric standpoint, and either reveals or confirms what the eye sees and the film reveals. I assume at a program like Kansas, there are various forms of the quantitative analysis to help enlighten trends and other strengths and weaknesses. However, in this case, the numbers only confirm what anyone carefully watching KU play this year already knows. First, Withey has a gift at timing and knowing how to block shots on a consistent basis. Watch for an increase in ball fakes against him which tend to get him off of the floor. (hope we get to see what happens if he does get in foul trouble and how the team reacts) Second, the three ball with our inconsistent and at times confused perimeter defense is killing us. Three, our guards can't seem to keep people in front of them. Nothing will send you home sooner in March than a team who gets hot and stays hot from the perimeter with the three ball. HCBS has a card up his sleeve he probably won't show yet to help with this problem if needed and if the problem remains unsolved. It is called the Triangle and Two. Teams seem to get very confused on offense against that particular junk defense.

yes, the t&2 defense is only good when the offense doesn't know that you're in it. Otherwise the offense would easily scheme to attack the glaring holes at each free-thow extended position and in the direct center of the paint. I would guess that if Self were to commit to a zone defense before post-season desparation time it would not be the t&2, but likely one of the more conventional zone defenses like a 2-3, 3-2, or 1-3-1.

However the t&2 is highly affective if you can get the offense off-guard and they don't know whether you're in man or zone because you can apply relentless on-ball pressure and play deny defense on the opposition's best off-ball offensive threat.

Can we say that thus, let our guards stay closer to their men to defense against 3pts. Dare the opponents' guards to beat ours to the rim since they are not going to score a whole lot anyway.

These stats drive the point home that I have been trying to make anecdotally about Self Defense for three years. Several thoughts triggered.

I don't think we are doing a very good job of pressuring the ball and making the perimeter shooters uncomfortable, so Jeff is going to have to continue to be dynamic down low or we are going to be in trouble against the better teams that have both inside and outside scorers.

Jesse, great analysis. I'm hoping you can do something like this bases on the shot clock. Breaking it down to 0-5sec left, 6-10, etc with shot percentage and make percentage. It just seems to me that we can play great defense until there is less than 5 second left and then the other guys always make it. Then again, these might just be the plays that stand out to me.

The only flaw in the idea of focusing on recovering to the three point line, rather than rotating to the ball is that it's highly doubtful we would keep up the 2pt dominance. Jeff can't block every shot, especially if opponents are able to pass to open guys in the interior of the defense. You still have to guard inside out.

Also, take note of the recent analysis by Ken Pomeroy that shows that opponents 3 pt % is not highly dependent on the defense. Translated, it doesn't really matter what defense you try to have against the 3 pointer, it's not going to do much. Kenpom calls the 3 a "lottery ticket" because sometimes it will payoff and sometimes it won't. But the odds aren't based on what the defense, or really the offense, does.

My guess is any improvement we see in 3pt defense allowed will be because younger guys improve on their hard close out technique. There is definitely some to be seen in guys getting out to the shooters in control but with their hands up and being disruptive to the shot.

I think it's also important to note that while our 3pt% allowed is worse than our 2pt%, it's still not "bad". It's just average. And if you go back to the Kenpom analysis, that's about all you can really control.