All advanced statistics courtesy of KenPom.com and are current as of March 26.

VCU's offense is its strength, as it shoots the ball well while also avoiding turnovers.

The Rams make a high percentage of three-pointers (36.7 percent, 62nd nationally), which is more impressive considering they take a lot of shots from beyond the arc (41.1 percent of their shots are threes, 23rd nationally).

VCU also makes a high percentage of its free throws (71.5 percent) while turning it over on just 17.1 percent of its possessions (25th-best nationally).

The Rams don't foul much defensively, posting a defensive free-throw rate that ranks 84th nationally. They've also been playing their best defense lately, as three of their last four opponents have been held under 1 point per possession; before that, 13 of VCU's 14 opponents had topped the 1 PPP barrier.

VCU is a veteran group, with its average player having 2.16 years of experience (49th nationally). 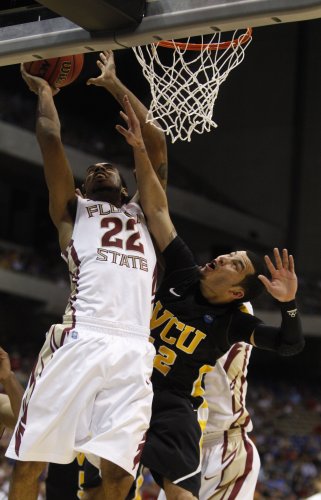 The Rams rank 106th in KenPom's adjusted defensive efficiency; if you placed VCU in the Big 12, the Rams would rank ninth in that statistic.

The team's biggest problem is its inability to keep opponents away from the offensive glass. VCU's opponents have grabbed 36.2 percent of their missed shots this year, which ranks the Rams 318th nationally in that category.

The Rams' struggles inside also show up in the offensive statistics. VCU pulls down just 31.3 percent of the available offensive rebounds (213th nationally) while getting 11.4 percent of its two-pointers blocked (306th nationally). VCU's free-throw rate also is just below NCAA average, meaning the Rams aren't a good foul-drawing team.

VCU also has a thin bench, as only 27.1 percent of the team's minutes come from reserves (258th nationally).

Six-foot-9 senior forward Jamie Skeen is better, as he is a great shooter inside (56.3 percent from two-point range) and outside (38.9 percent from three-point range on 72 attempts) while also getting to the free-throw line more than anyone else on the team (free-throw rate ranks 74th nationally).

Rodriguez's strength is his passing, as he's contributed 29.7 percent of his team's assists while he's been on the floor (87th nationally). Still, he's turnover prone (committing a turnover every 15 minutes of gametime) and has been awful inside the arc, making just 65 of 192 shots (33.9 percent).

Also watch for 6-2 guard Brandon Rozzell, who provides VCU with an offensive lift off the bench. 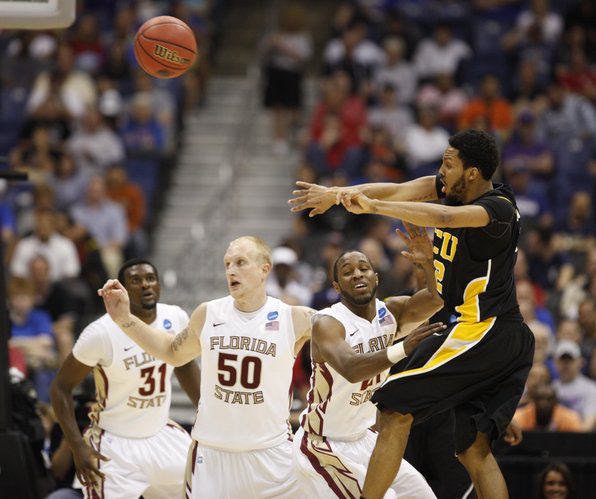 Virginia Commonwealth guard Brandon Rozzell fires a pass over Florida State defenders Chris Singleton (21) Jon Kreft (50) and Michael Snaer (21) during the first half on Friday, March 25, 2011 at the Alamodome in San Antonio. by Nick Krug

Rozzell's usage is high (he ends 26.9 percent of the Rams' possessions when he's in), but he's been productive by making 71 of 179 threes (39.7 percent) while keeping his turnovers way down (one every 30.1 minutes). He's also quick defensively, coming away with steals on 3.4 percent of opponents' possessions (103rd nationally).

Statistically, this appears to be the second-easiest team KU has faced in the NCAA Tournament, behind Boston in the Round of 64.

Though the Rams have been better defensively as of late, their season-long numbers resemble that of a lower-level BCS conference team. 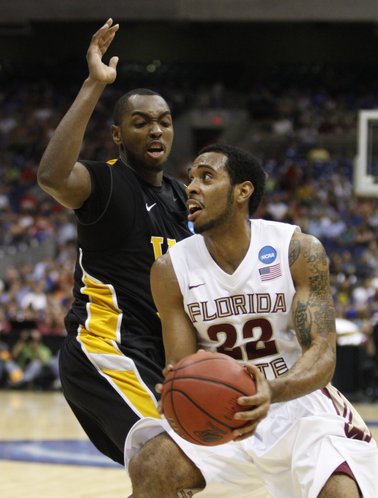 Virginia Commonwealth guard Ed Nixon defends a drive by Florida State guard Derwin Kitchen during the first half on Friday, March 25, 2011 at the Alamodome in San Antonio. by Nick Krug

VCU's biggest weakness will be going against one of KU's greatest strengths, as the Rams struggle with defending the interior and also haven't been able to put up much of a fight on the offensive or defensive glass.

If the Rams hope to have any shot, they'll need to try to play even with the Jayhawks rebounding-wise. Even if they do that, they'll most likely need to hit a lot of three-pointers to win (which they're capable of) while slowing down KU's frontcourt scoring.

VCU does throw a lot of different defenses at teams to try to get steals, and this might not be a bad time for the Rams to try a packed-in zone. Because the Rams are so overmatched inside, that kind of defense would force KU to hit open three-pointers to win.

It might be a long shot, but at this point, so are the Rams.

great read! lets do this guys and kick some butt!! rock chalk!!!

Jesse, thanks once again. I always enjoy reading your blogs.

Wow, Jesse, the stats just overwhelm me. But I love it. Statistically, the Jayhwawks should have a cupcake today, as Dick Vitale would say. Tell that to Florida State, Purdue and Georgetown, though. KU should win but we all know what happened against Davidson in '08.

He means to say it was really close and we almost lost.

We should know by now that when someone says on paper we should win easily, we should use that paper in the toilet. On paper, VCU should have been in the NIT but instead have gone through 3 teams who had them beaten on paper. There is a consistent pattern of these underdog Mid-Majors with nothing to lose, overachieving there way deep into the tournament. We need to take them very seriously, come out determined and never let them feel like they have a chance.
Rock Chalk

So far KU has continued to play to their strengths. On offense they have been very methodical, run when you can but play a ball control, patient offense going inside-out. The defense has extended, forcing contested 3's and letting the inside people play front side, eliminating the inside pass. Excellent weak side help. If KU continues to play smart and not let VCU dictate the pace, this game should have a similar ending to the first 3. KU 79, VCU 62

Thanks Jesse for the stats. Thanks also for the Cram Session. It's time for KU to wake-up Cinderella & send her home.

Is it just me or do other feel that this game won't be as tough as projected. Knock on wood, but everyone thought Richmond was going to be a tough game but it was anything but. When we played Richmond, Richmond had beaten Vanderbilt (who is not a great team to begin with) and Morehead State (a team lucky to be there and not good either). Who has VCU really beaten in the tournament so far? USC is not a great team and just barely limped into the tournament. Georgetown is not a top tier Big East team and struggled coming into the tournament. Purdue could be considered a good win, but Purdue is not a great team defensively and they try to outscore opponents with Johnson and Moore. And Florida St. Florida St. is the 4th or 5th best team in a very weak ACC. The suck on offense and are good on defense. VCU beat them by 1. I watched that game and Florida St. missed lay up after lay up and I couldn't believe myself. I thought the Richmond game was going to be a blow out and I feel the same with this game and here's why:

VCU's pg is under 6 foot and tyshawn's arms are about 7 foot. Advantage Tyshawn's arms. I see Tyshawn hounding Rodriguez all night and forcing bad passes time after time for easy run outs and easy transition points.

The Law firm is at the top of their game and I think the handcuff Skeen. Analyst have been saying the past couple games that KU will struggle with the other teams athletic bigs. Do these so call "experts" of college basketball forget time after time that we actually have the most athletic bigs in the game? you can even add TRob and Rio in as 2 extremely athletic bigs.

These to home grown kids are hitting their threes which helps the Cus and Kieff. Let VCU pack the paint. Our bigs are the best passing bigs in the game. They will find the open Kansan and let them do damage at first so they can do damage in the paint later.

This is the last piece to the puzzle for us. I haven't mentioned EJ, Withey, Travis, or Selby yet, but these 4 guys can come off the bench to steal some minutes if need be. Yes on EJ and Selby have been playing, but if we all recall Cole coming in against UNC int he Final Four game and owning Hansborough all night. Withey or Travis could be that guy tonight or any night. Shall we also forget when Sasha went 6-6 in out Elite 8 game against Davidson in 2008. Either of these four guys can be that spark that helps the team get the energy and the boost they need to get back to the Final Four.

You can't come and look at the name on the opponent's chest and think to yourself "this is going to be easy" heart wins the tough games. We need to come out and take heart out of the equation.

UVC is convinced that they can win, so it's more important than ever to come out and stomp on them early to shake that confidence a little. It sounds like they play Missouri defense, but not so wild since they don't commit a lot of fouls. Richmond beat these guys by 10 during their regular season, so I hope that means something.

looks like they were just out coached. KU has much better talent