After Kansas' 77-57 victory over Richmond on Friday, KU fans should take a second to appreciate just how well KU coach Bill Self and his staff prepared the Jayhawks.

Louisville coach Rick Pitino picked Richmond to beat KU, in part because he said that a few days was not enough time to prepare for the Spiders' unusual style of play.

Self and his coaches proved otherwise.

Richmond had scored 1.30 and 1.20 points per possession in its first two games of the tournament. Though the Spiders played slowly, they still were a highly effective offensive team.

That's until they ran into Kansas, which held Richmond to 0.90 PPP — its second-worst mark of the season.

Tom Keegan goes into some of the changes KU made defensively, which included playing defense a different way than it had all season.

The result was a flustered Richmond team. 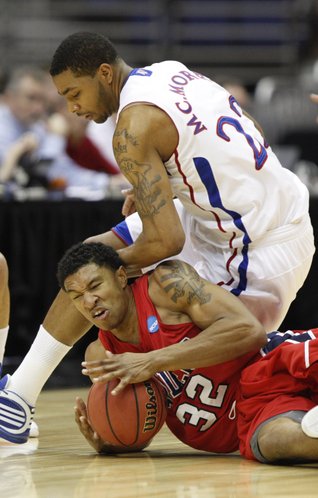 Kansas forward Marcus Morris and Richmond forward Justin Harper battle for a loose ball during the first half on Friday, March 25, 2011 at the Alamodome in San Antonio. by Nick Krug

Perhaps most impressive for KU was its ability to shut down Richmond's assists.

The Jayhawks' defense also pressured Richmond. After posting just nine combined turnovers in its previous two games, the Spiders had 11 turnovers against KU.

Over the past week, the Jayhawks' coaching staff did a great job with preparations for the Richmond game, and it showed Friday. 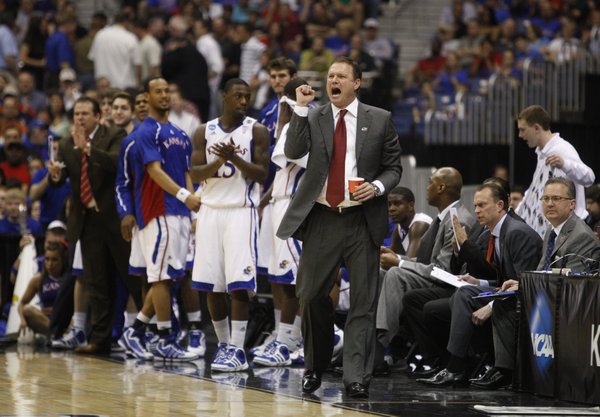 Kansas head coach Bill Self applauds his offense during the first half against Richmond on Friday, March 25, 2011 at the Alamodome in San Antonio. by Nick Krug

In an Elite Eight filled with big-name coaches (Roy Williams, John Calipari, Billy Donovan, Brad Stevens, Jim Calhoun, to name a few), KU fans should take comfort in knowing they might just have the best of the bunch.

In a close race between Brady Morningstar, Marcus Morris and Tyshawn Taylor, Morningstar takes M.O.J. after his efficient night.

The senior posted 2.00 points per possession used while ending 13.8 percent of KU's possessions. When he ended a KU possession, the Jayhawks scored at least one point 66.9 percent of the time.

Morningstar's effective field-goal percentage of 81.8 percent was highest on the team for among who took more than two shots. He finished with 18 points on 7-for-11 shooting from the field and 4-for-7 shooting from three-point range.

The senior also contributed 23.5 percent of KU's assists while he was on the floor and came away with steals on 3.9 percent of his defensive possessions.

It was only the second time all season that Morningstar led KU in scoring (19 points at Nebraska on Feb. 5).

KU was awful on the defensive glass. 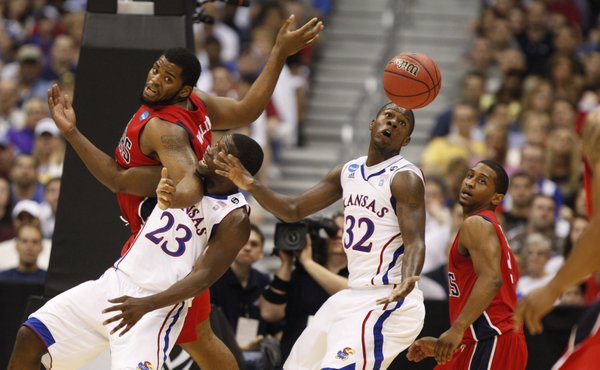 Kansas players Mario Little (23) and Josh Selby (32) wrestle for a loose ball with Richmond players Derrick Williams, left, and Cedrick Lindsay during the first half on Friday, March 25, 2011 at the Alamodome in San Antonio. by Nick Krug

Richmond came into the game as a terrible offensive rebounding team, grabbing just 28.5 percent of its misses (288th nationally).

On Friday night, the Spiders corralled 36.4 percent of their misses — their sixth-highest mark of the season. Richmond's 16 offensive rebounds also were its second-highest total of the entire year.

Thankfully for KU, Thomas Robinson posted some ridiculous rebounding numbers, grabbing 29.4 percent of the offensive rebounds while he was in (yep, that's a higher number than Richmond's team averaged coming into the game, and he's only one guy) and 56.8 percent of the available defensive rebounds. So if Richmond missed a shot, more than half the time, Robinson was going to be the person coming away with the ball. Crazy stuff.

KU plays another weak offensive rebounding team in VCU on Sunday, so look for the Morris twins to rebound better after an off night on the glass.

After picking up two quick fouls, Markieff Morris never quite looked like himself on Friday.

The junior forward posted a team-low 0.80 points per possession used while ending 22.4 percent of KU's possessions during his 17 minutes. He made just 2 of 8 shots while posting a team-worst effective field goal percentage of 25 percent.

Markieff did have an impact on the offensive boards (grabbing 34.6 percent of KU's missed shots while he was in), but as mentioned above, he was nearly invisible on the defensive glass, which is usually his strength. Markieff, whose 25.5 percent defensive rebounding percentage ranks him 26th in the nation, grabbed just 5.3 percent of the defensive boards Friday.

Still, Markieff fired the Jayhawks up before the game then helped teammate Josh Selby clean up during the game, so the forward probably had more of an impact than the stat sheet recognized against Richmond.

Though KU didn't perform as well as expected on the defensive glass, the Jayhawks did dominate the offensive glass against Richmond. 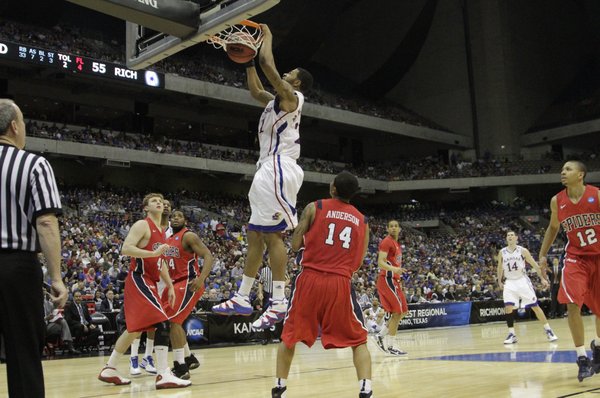 Kansas forward Markieff Morris (21) dunks on Richmond in the second half Friday, March 25, 2011 at the Alamodome in San Antonio. by Mike Yoder

The Jayhawks pulled down 44.1 percent of the available offensive rebounds — the third-best mark posted against the Spiders this year.

KU also did a good job of limiting its turnovers offensively, giving it away on just 14.3 percent of its possessions — its lowest mark of the NCAA Tournament so far.

The Jayhawks' 1.22 PPP was its best in its last three games, but it still was tough not to come away more impressed with the team's defense.

KU allowed just 0.69 PPP to Richmond in 32 first-half possessions. To put that in perspective, there was only one game during the entire Big 12 season where a team was held under 0.69 PPP (though that was for an entire game).

The Jayhawks now have outlasted all the other No. 1 seeds, and no matter which team KU plays the rest of the way, it will be the Vegas favorite in that game. 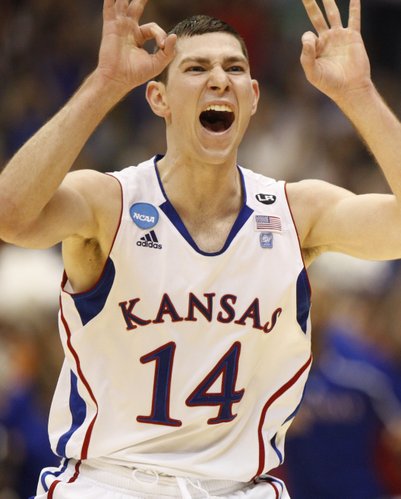 Kansas guard Tyrel Reed celebrates a three by teammate Josh Selby against Richmond during the first half on Friday, March 25, 2011 at the Alamodome in San Antonio. by Nick Krug

That has to be an encouraging thought for KU fans, along with knowing that the Jayhawks have a coach who can prepare his team for any style that might come its way.

Jesse--What is KU's record in regional finals? I think it's about 13-3. Maybe UCLA's record is as good, but KU's has to be close to the best. The game to get to the final four has to rank with the championship game in terms of pressure.

I felt that there was lack of focus and intensity from Morii yesterday and the numbers back up that feeling. It is nice to see superior guard play by TT, Tyrel and Brady but KU will need inside contribution from the twins for remaining games.

Thanks for the stats, Jesse. I always enjoy your recaps.

Now where's your VCU scouting report, so I can get good 'n' nervous about how freaky-good our NEXT opponent looks on paper? :)

Ha. Hopefully will be out later today. I will say that there won't be as many glowing things to say about VCU as there was about Richmond. The Jayhawks made the Spiders look bad.

I have just recently started reading these over the last few weeks. Very enjoyable for me, since I love to see the statistical breakdowns. Thanks for your work.

This team doesn't rely on one guard and one big man like so many other teams do. That will lead this team to the national championship...if they only don't forget it. The team hasn't reach full potential because there are still lapses of what HCBS would call the perfect game. It will come, as the Hawks seem to be peaking at the right time...

The NCAA tournament is all about the guard play. Kansas has too much for any team to overcome (5) that is all sorts of weird combinations that you have to defend and thats not counting the tweeners Little and Releford.

All of these so called experts are so overly concerned on if can Kansas defend. Well who has defended against the Hawks. Don't they keep score or its just for fun and lets not keep score? Or is its just a we don't like Kansas so lets just move them thru the bracket so they can get out of our sight?

It takes a while for the players to get into their groove with a (9) man rotation and then to top it off with injuries and suppensions it took a while.

BUT!!!!! Ohhhhhhh boyyyyyyyy look out its a train no a plane no its the JAYHAWKS

Why not M.O.J. = Bill Self. Or The Coaching Staff. Recognizing the need, then devising and installing that defensive scheme so effectively certainly qualifies, in my estimation.

The bigs were bound to have lower D glass numbers due to having to come out and chase their guys making cuts in the "Princeton". When you D that offense, the guards just have to pick up part of the slack.

And I agree with the staff getting MOJ. When your kids have been playing passing lanes and pressuring all year, it takes some serious effort to get them thinking right for the Princeton. Backdoor cuts are it's bread and butter.

It's pretty funny to hear Rick Pitino knock Kansas. He's still smarting from the beatdown Roy Williams' Hawks put on his Kentucky team in the Fieldhouse all those years ago.

Good point, murph. I'd like to believe that isn't affecting his picks, but you never know.

Jesse---- love your work, as always. As mentioned before, saw VCU play Wichita State in the Bracket Busters game at Koch Arena. The Rodriguez kid can flat out compete. And then, they have Burgess. However, if the Jayhawks still play with a chip on their shoulder like they have been, I just can't see them losing. Still makes me nervous (or as Stupidmichael would say, makes me very scared) because this game is an Elite 8 game. Self's luck in the Elite 8 games, with the exception of '08, hasn't been very good.

I enjoy this column more than any on site. But I did have to furrow my brow at this comment:

"In an Elite Eight filled with big-name coaches (Roy Williams, John Calipari, Billy Donovan, Brad Stevens, Jim Calhoun, to name a few), KU fans should take comfort in knowing they might just have the best of the bunch."

OK, I do know who Roy Williams is. I know who Billy Donovan is. And I know who Jim Calhoun is. But which years did Stevens and Calipari win? They can only wish they had Bill Self's record. I don't think it likely anyone reading your column needs props for Bill Self. Even the most rabid Jayhawk fan must understand by now that seven straight Big XII titles have only the coaches as the common denominator.

As always, great analysis, Jesse. I think you are spot on. While the game was won on the court by the players, in my opinion the coaching staff obviously put together a game plan very well suited against Richmond's style of play. The players executed the plan to near perfection.

The VCU game should be interesting. Shaka Smart is a brilliant, upcoming coach. Thankfully, he only has a day to prepare his team.

Jesse- Thanks for your GREAT coverage of the tournament. It's loaded with great information, analysis, and is always good journalism. We appreciate you! And you are right, we have the best of all the coaches!!!!