All statistics courtesy of KenPom.com and are current as of March 15. For a breakdown of potential KU opponents UNLV and Illinois, check back to KUsports.com Thursday or pick up a copy of the NCAA Preview section in Thursday's Journal-World. 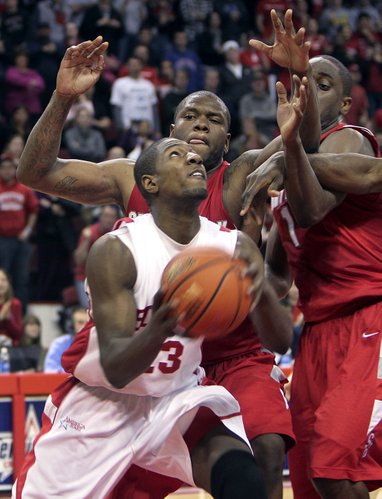 Boston looks to be a team that doesn’t make a lot of mistakes.

The Terriers aren’t turnover-prone, as they give it away on just 19.0 percent of their possessions (NCAA average is 20.2 percent). They also don’t foul much defensively, allowing just 16.7 free throws per game (Kansas allows 19.4 free throws per game).

The Terriers’ style of play might also help them as a heavy underdog, as they rank 295th in tempo out of 345 NCAA teams. A game with fewer possessions gives BU a better chance at an upset. The Terriers also are a good free-throw shooting team (73.1 percent).

Boston has one huge, glaring, can’t-be-missed weakness: It has almost no size.

The Terriers’ tallest player eligible this season is 6-foot-8. And because of that, they struggle in many areas that you’d expect.

Though BU is a decent offensive rebounding team, it has major issues keeping opponents off the offensive glass. Opposing teams are grabbing their own misses 33.5 percent of the time, which ranks BU as 235th nationally in that statistic.

The Terriers also struggle from inside the arc offensively, as they’ve made just 43.5 percent of their twos this season (313th nationally). Exactly one-ninth of their two-pointers taken are blocked (299th nationally).

Six-foot-5 guard/forward John Holland won America East Player of the Year this season, and deservedly so.

The senior averages 19.2 points per game while taking on a huge offensive load for the Terriers. He puts up 34.1 percent of the team’s shots while he’s on the court, which ranks 14th nationally. Though he’s not a big assist guy (1.6 per game), he hardly ever turns it over, averaging one turnover every 15.5 minutes.

Though the Terriers come in with an 11-game winning streak and appear to be one of the best 16 seeds in the tournament, they shouldn’t be able to stay close with Kansas on Friday. BU lost to Kentucky by 34 earlier in the season and doesn’t appear to have many ways to slow down KU’s powerful forwards. The big key to watch will be BU on the defensive glass. If the Terriers can limit the offensive rebounds from Marcus Morris, Markieff Morris and Thomas Robinson, they might be able to keep the pace slow, hit a few threes and hang around a while. If KU gets a lot of second-chance points, though, this one has the potential to get ugly in a hurry.

With BU's overall size, I would include Mario Little in that category of 'bigs' who might find some room inside to score second chance points. I also like the way our guards are rebounding this year too. Sounds like the area where we will dominate.

We're lucky to have Jesse as a complement to Keegan's wacky style (which I also like).

Home grown Jesse Newell. Like Tina Turner says in her song---"Simply the Best! I don't what I would do if I didn't get my daily analysis from Jesse Newell. A fish out of water?

Would be great to see Robinson and Mario have good games.

Withey and Releford should play :)

Coach Self always says, "It's not who starts the game that matters, it's who finishes the game"

awesome breakdown. i wish you had the breakdown on all the teams. it would have helped me fill out my backet!

anybody know which jerseys we'll be wearing?

should be home whites to go with the seeding.

Probably white, we are the home team until we run into Ohio State, assuming they make it that far.

Good analysis, Jesse. I watched some of BC's games this year and found them tedious. I was very surprised to read in your article that they won their last 11 games. Except for Holland, who is a very good guard, they don't have the players to match up with us. I can see Brady on Holland with some help from Releford off the bench. Don't think we have anyone else who can defend him. Our bigs will need to help out when he drives. He'll probably get his 20+ but other than him, I expect them to rely heavily on the 3. The Twins and T-Rob should score a lot of points inside and we should own the boards.
rock chalk

BU not BC--too early in the morning and the time change...

I posit that Boston doesn't foul much because they've never faced interior dominance like KU brings to the table. They've never had to double/triple the paint like they're going to have to against us. Look for them to commit a ton more fouls than usual to offset our incredible advantage in athleticism inside. And, if TT and the guard crew are cutting and dishing, that will only make it worse.

Good article...I've been looking for a breakdown of Boston U since the brackets got announced. Sounds like the Morrii and TRob should have huge games.

I'm visioning a globetrotter like game where we just dunk it on them all day.