"They weren’t going to take any bad shots. They’re a well-coached team," Roberson said. "It’s pretty hard guarding them for 35 seconds, and then going back on the offensive end and not getting the bucket, then you have to guard them again." 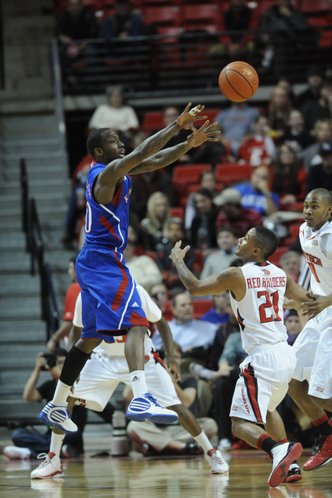 Most fans want to talk about how much a team runs. Will the team play faster this year? Does it have the athleticism to win an up-and-back game? I even think most of KU coach Bill Self's excitement for this year's team was that he did have a squad full of players that can all move well.

It's interesting, because things seem a little backwards right now.

Yes, the Jayhawks are still running. They rank 37th in adjusted tempo, and if that number stands, it will be the fastest team Self has ever had at KU.

The weird thing, though, is that recently, this team is playing against its speediness: The Jayhawks are having trouble converting shots in transition, yet have been extremely efficient in a half-court game. 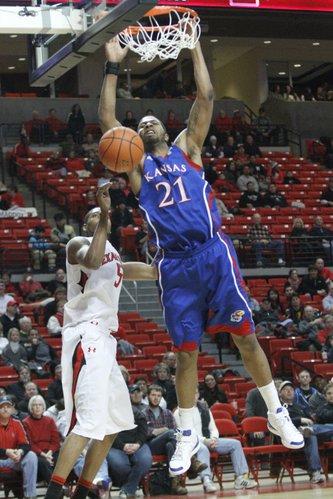 KU was perhaps better than it has been all season in a half-court set on Tuesday.

The Jayhawks turned it over just six times in a 70-possession game, which put their turnover percentage at a minuscule 8.6 percent.

KU's low turnover percentage didn't occur because of quick shots, either. The Jayhawks were patient offensively, worked the ball around and were able to get easy shots, as 48 of KU's 88 points came from in the paint. 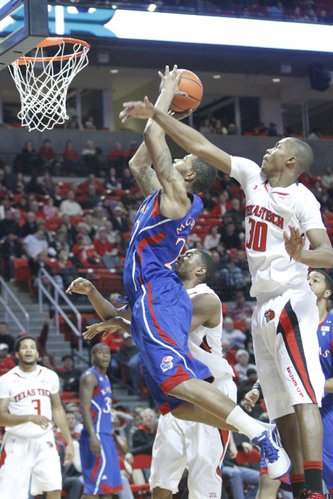 KU coach Bill Self talked afterward about the difficulty of trying to defend post players when the ball is reversed to all sides of the floor.

The Jayhawks showed the patience to do that Tuesday night, along with the ability to take care of the basketball.

If that formula is replicated, opposing teams are going to have a hard time stopping KU's offense, especially with as much talent as the Jayhawks have in their frontcourt.

Marcus Morris had the best start, but Thomas Robinson wins the M.O.J. with the most complete performance. 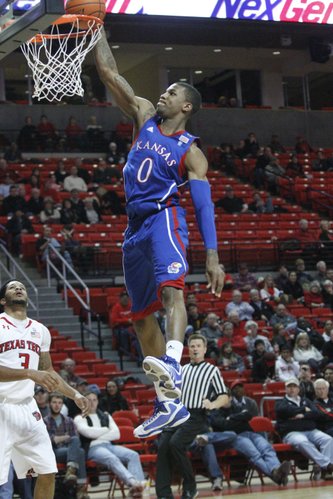 Kansas forward Thomas Robinson put in a bucket against Texas Tech on Tuesday, Feb. 1, 2011 in Lubbock, Texas. by Richard Gwin

Robinson posted 1.45 points per possessions used while ending an above-average number of possessions (24.4 percent). He scored at least one point on 82 percent of the possessions he used. 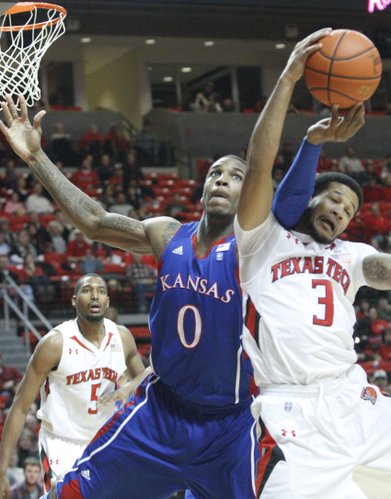 I wasn't expecting to see Robinson's points per possession used that high, but there was one main difference between this game and others: He didn't hurt his efficiency at the free-throw line.

The sophomore forward was a perfect 5-for-5 from the stripe; it was only the third time this year he made all his free-throw attempts (and he's had 17 games where he's attempted at least one free throw).

Robinson also had no turnovers, and now has just one giveaway in his last 49 minutes played. If he continues that trend, there's no reason he can't be a player that averages 20 minutes per game for KU from here on out.

Again, this is nitpicky, but KU didn't offensive rebound as well as might have been expected against Texas Tech. 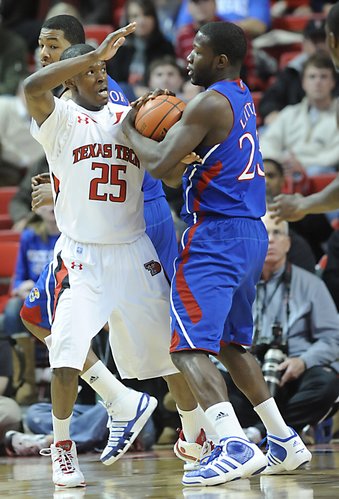 KU pulled down 35.1 percent of the offensive rebounds, which was below the Jayhawks' season average (35.9 percent).

Looking back at the stats, the problem seems to be in an unlikely place.

Obviously, guards aren't expected to get a lot of the loose offensive caroms, but it's rare to have a game were no KU guard even grabbed one — especially against a bad offensive rebounding team.

This won't matter much in a 22-point blowout, but it might indicate that KU's guards could do a bit more to try to gain their team some extra possessions.

For the third straight game, it's Tyrel Reed, though it's hard to know how much of this we can place directly on him. 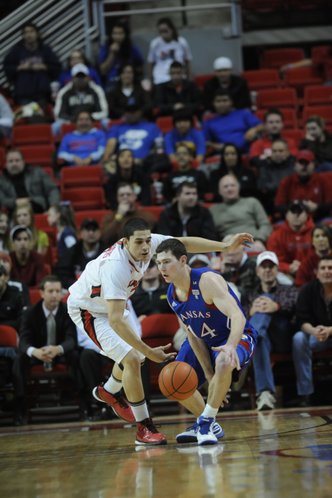 After the game, Self said Reed had a sore foot that has been bothering him, and perhaps that is the reason for his recent cold shooting.

Reed posted 0.77 points per possession while ending 14.2 percent of KU's possessions in his 16 minutes. The senior made just 1 of 4 threes, and over his last three games, he's gone 4-for-15 from three-point range (26.7 percent).

Luckily for KU, Brady Morningstar has played some of his best basketball in the last three games to take some of the scoring pressure off of Reed.

After a shaky start to the Big 12 season offensively, KU has responded with three strong offensive performances in a row.

Against Texas Tech, KU put up 1.26 points per possession — its third-highest of the Big 12 season and its third straight game with at least 1.23 PPP.

Though the Jayhawks have oftentimes struggled this year with turnovers, they thrived Tuesday by taking care of the ball and also staying patient in half-court sets to make for easier feeds inside.

We'll see if the Jayhawks stick to the same gameplan Saturday against Nebraska — a team that will present much more of a defensive challenge inside.

KU is ( in my opinion ) the best offensive team in the nation right now. If we continue to play smart and unselfish on the offensive end we are virtually unstoppable. Our defense is improving steadily but we still has a way to go defensively ( don't get me wrong we have improved greatly ). Thankfully our offense is so good right now its caring are defense on its back. But as we all know one bad offensive day and we can get our butts beat. I still believe we are on the correct road to the final four if we continue to improve as we have been. Great work Jayhawks... Keep it going

Good point on transition Mr. Newell. I noticed last night, Coach Self was adamantly yelling at the guards to "GO". Maybe he does this often, but you can't hear it because of crowd noise, which was pretty much non existent last night. Does he normally yell this, or is this a point in the season where he is focusing on more of an up-tempo style of play? Perhaps to prepare for Mizzou, or to run on the bigs from Braska as well.

Self commented on fast break points in his post-game, and said it was something they were going to work on. I know he hasn't been happy with it, and has mentioned several times how they keep messing up on fast breaks.

Great stuff, but I can't believe peaking too early will be a problem for a team that has had 2 games so far with a full roster.

In all fairness to the smalls, when shots are occurring from point-blank range, the few misses are going to be battled over by the Gigantors.

Jesse-- Love your analysis every time. KU is still staying hungry. Look forward to Nebraska in Lincoln, on Saturday. It won't be a mausoleum in Lincoln, that's for sure!

Let's hope it is exactly that – after the final buzzer.

good one! i didnt' realize our offensive rebounds < average - and Reed has sore foot - that explains why he came out with 0 rebound that night..

Might have something to do with a couple of errant jumpers before he curtailed the shot, gutted up and kept doing what he could still do well enough to help. With Brady taking up the slack, we (more important, Pat Knight) had to wait for the stat sheet to realize Tech could have been doubling down a lot more a lot sooner than they did.

Josh did the same while T2 focused on his handles, kept up his D and feeding the three beasts. EJ as well. Sure is nice enough depth both inside and out that readjusting minutes and roles works so seamlessly.

Good point! The damaged wheel probably contributed to the lack of offensive rebounding by Reed. He has been doing so well rebounding. I am not so sure if that is the reason for his missed shots, but I believe he will start hitting soon regardless.

One of the keys to transition ( fast break ) success is getting the ball to the middle of the court as fast as possible on the break. Even if its 2 on 1 in the middle the dribbler can pass the ball without going past the defender. If the defender moves between then there is a clear land to the basket for the middle guy. Obviously 3 on 1 the middle is a must. 3 on 2 same thing if the defender moves into the passing lane you go straight to the basket. If not then pass to the open wing. One thing Old Roy taught was running the break without letting the ball hit the floor. If you remember we were very effective back then at fast break points. He was big on starting with the ball in the middle as soon as possible. A little practice will get the job done, this is a very talented group of guys they just need to get positioned correctly.

Love the transition game, BUT if I had to choose, I'd prefer to be good in the half-court set. Roy's teams destroyed lesser opponents (and often good opponents) with that game. But when we met a team that could stop our transition, our half-court O sputtered, and we'd lose to the likes of... well, let's not say those names out loud.

Also reminded of 1988 title game. Can't recall for sure, but I know it was tied 50-50 at halftime, so we must have been running with OU. Then, Larry Brown switched to more deliberate half-court O, and it totally screwed up OU. So, perfecting both parts of the game can be a great way to win the Big One.

That is a great picture of T-Rob dunking.

When we play well inside (Marcus, Markieff, TRob) there isn't a team in the country that can stay with us. Not one.

And it's not like our guards are bad. In fact, on most other teams, this set of guards would be the strong point.

I'm going to say it now.

If we can average 45 points and 25 rebounds from the trio in March, we WILL lift the trophy.

Great analysis, Jesse. Explain why there were 11 missed layups.

Jesse, that photo of TRob dunking one handed (4th photo from top) is outstanding. It would make a fantastic PR shot or a poster. Any ideas how it could be used in a wider setting?

I, for one, was extremely happy to see no more than one turnover per player that last game. We keep that up, we're deadly!

(btw, the caption on the last pic says "Shelby" instead of "Selby"...)