Recap: Looking at which KU players are having the toughest time with turnovers

Once again, Kansas' inability to keep from turning the ball over was one of the biggest stories following the Jayhawks' 88-80 victory over Long Beach State on Tuesday.

And while Tyshawn Taylor takes criticism for many of KU's turnover problems, a look at the numbers shows that other KU players are having their own issues with carelessness.

Turnover rate is a better number to use than raw turnovers because it gives us more context. This number divides a player's turnovers by the possessions he ends.

Thus, a player like Taylor — who is a major part of KU's offense — can be more fairly compared to a guy like Travis Releford — who doesn't end as many possessions and, thus, shouldn't turn it over as often.

So far, here are KU's leaders in turnover rate for this season, according to Statsheet.com.

For those wondering why Tharpe didn't get in on Tuesday, this might be part of the answer. So far, he hasn't been a reliable ball-handler, and add to it that he's not a great defender yet and has made just 3 of 16 shots this year (18.8 percent), and you can see why he might not be in Self's trust circle as of yet.

In case you were wondering, Releford was fourth-lowest on the team in turnover rate last year at 16.8 percent. 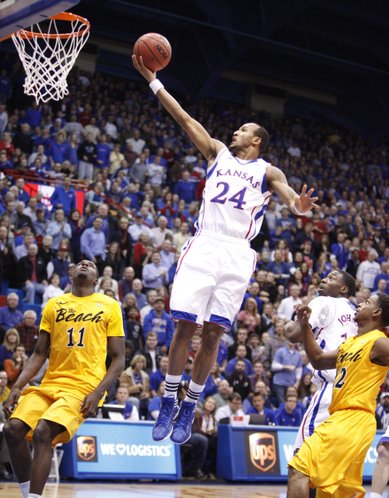 Two things stand out to me from the numbers above:

Though Self said afterwards that the best player in the game was Jeff Withey, this blog declares the M.O.J. is Thomas Robinson. 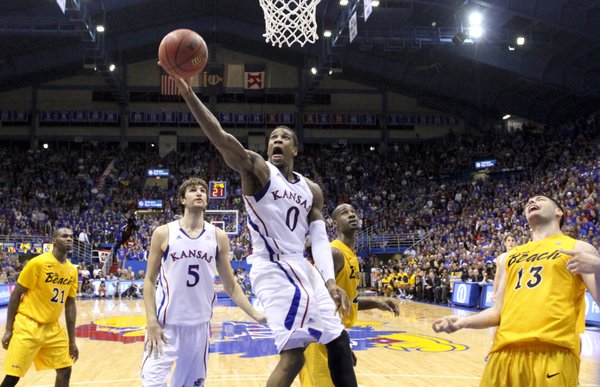 Kansas forward Thomas Robinson heads in to the bucket against the Long Beach State defense during the second half on Tuesday, Dec. 6, 2011 at Allen Fieldhouse. by Nick Krug

The junior posted 1.34 points per possession used while taking on a huge offensive load, ending a team-high 27.6 percent of the possessions he was in. That high of a PPP number combined with that high of a usage percentage is an All-America-type performance.

Robinson posted an impressive effective field-goal percentage (71.4 percent, second on the team among those who took more than two shots) and also a strong free-throw rate of 71.4. 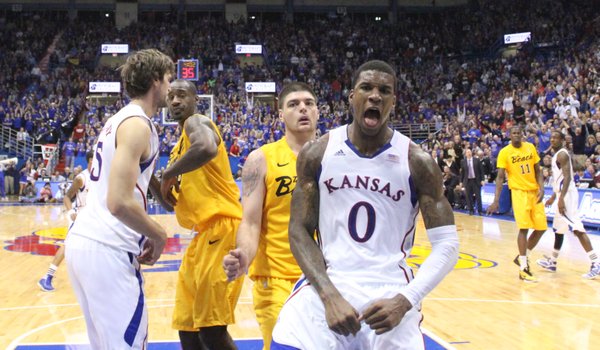 Kansas forward Thomas Robinson celebrates for the television cameras after a put-back dunk against Long Beach State during the second half Tuesday, Dec. 6, 2011 at Allen Fieldhouse. by Nick Krug

Robinson is now 16-for-23 (69.6 percent) in his last two games and is starting to separate himself statistically as KU's best option offensively. 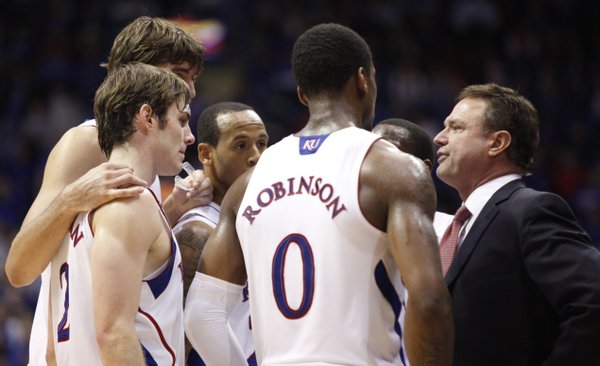 The Jayhawks huddle around head coach Bill Self late in the game against Long Beach State on Tuesday, Dec. 6, 2011 at Allen Fieldhouse. by Nick Krug

The turnover problem is nothing new. KU turned it over on 27.8 percent of its possessions against LBSU, which was the second-highest number this season behind the UCLA game.

In their last five games, the Jayhawks have turned it over on 25.7 percent of their possessions. To put that in perspective, the NCAA average is 21.3 percent. Also, Self has never had a KU team turn it over on more than 22.2 percent of its possessions.

KU also had a remarkably low number of steals (three) considering the game had a high number of possessions (79). The Jayhawks came away with steals on just 3.8 percent of their defensive possessions, which is the seventh-lowest for a KU team during Self's nine seasons.

This low steal percentage also indicates just how well KU played offensively in the first half, as the Jayhawks finished with a solid PPP number (1.11) despite getting almost no production from transition points off steals (KU had only four fast break points). 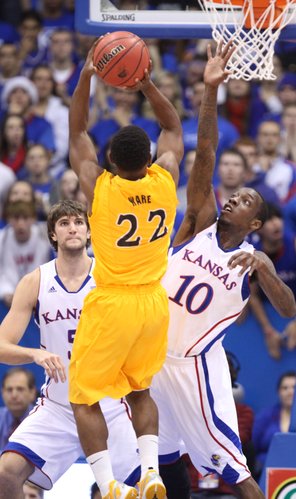 Kansas guard Tyshawn Taylor defends against a shot by Long Beach State guard Casper Ware during the first half on Tuesday, Dec. 6, 2011 at Allen Fieldhouse. In back is center Jeff Withey. by Nick Krug

Though KU needs to do a better job of not fouling shooters, that number also was inflated because of the Jayhawks' turnovers. There were quite a few occasions where KU players were forced to foul after a turnover to prevent an easy basket in transition.

Travis Releford takes this spot after an inefficient game offensively. 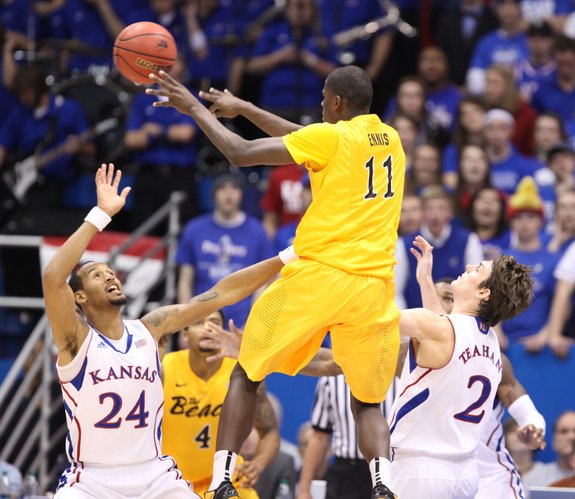 Kansas guards Travis Releford (24) and Conner Teahan (2) defend against a pass from Long Beach State forward James Ennis during the second half on Tuesday, Dec. 6, 2011 at Allen Fieldhouse. by Nick Krug

The junior posted a team-low 0.81 points per possession used while ending a high number of possessions (20.9 percent) for a role player.

Releford's offensive numbers also are suffering because of an inability to make open threes. The junior was 0-for-3 from long range Tuesday, which pushed his season total to 5-for-18 (27.8 percent).

Coming into this season, Releford was a career 37.8 percent three-point shooter, so I think we can expect his shooting numbers to improve from this point forward.

Though KU had few steals and allowed LBSU too many trips to the free-throw line, it held on for a victory defensively by blocking shots and dominating the defensive glass.

The Jayhawks blocked 22.6 percent of the 49ers' two-point attempts, which was the second-highest percentage in KU's last 15 seasons. Jeff Withey, meanwhile, blocked an astounding 34.1 percent of LBSU's two-pointers while he was in the game.

The result was holding the 49ers' high-powered offense to 1.01 points per possession, which was below their season average of 1.07 PPP.

Offensively, KU posted 1.11 PPP despite turning it over at an alarming rate. 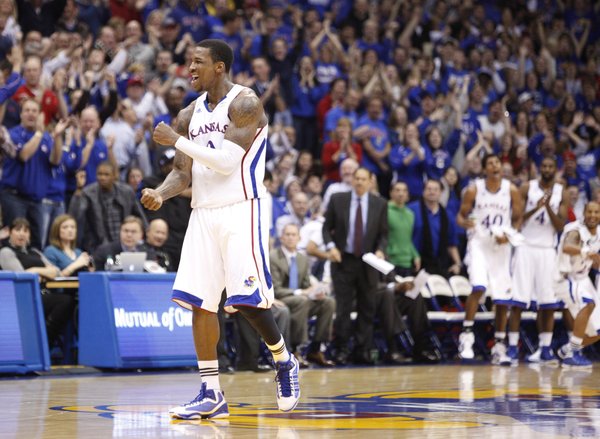 Kansas forward Thomas Robinson pumps his fist after a bucket by teammate Elijah Johnson against Long Beach State during the first half Tuesday, Dec. 6, 2011 at Allen Fieldhouse. by Nick Krug

The Jayhawks had their second-best shooting night of the year (59.3 eFG%), helped mostly by strong performances by Robinson and Teahan.

KU's biggest issue continues to be turnovers, though, and that's not a good sign going into Saturday's game, as Ohio State is fourth in the nation in defensive turnover percentage (29.2 percent).

In other words, KU's guards need to get better. In a hurry.

HCBS should make the team do gassers or suicides for every turnover they had the previous game. I bet that number would go down in a hurry...

Also, great analysis as always Jesse! We're so lucky to have you.

I know this probably seems like an obvious question, but I would really like to know why TT, EJ, and TRel are so much worse this year. Is it simply new roles, no longer having stabilizing players (Sleeves, Tyrel, and McMorii) on the court/bench? Are they thinking too much? Or are they just careless with the ball and simply not good passers?

I really don't think it's the latter, but as this continues...it's hard not to think that may be a portion of it.

Technically, neither TT or EJ are really worse (EJ is actually slightly better). So...maybe it really is new roles/no experienced guys to come in and stabilize/settle them down.

New roles for sure. They are trying to do toooo much. Forcing things. They just need to slow down and pass better to get easier, unforced shots. They'll get better by March.

It goes to validate why HC Self played and relied on Morningstar and Reed so much.

How 'bout TRob & Withey bringing up the ball - Danny Manning can teach them that too!

Oh how I miss Tyrell Reed !

"Ohio State is fourth in the Nation in defensive turnover percentage."

Yikes! Question is: "Will the Jayhawks rise to the occasion or will they get severely exposed in the Phog?"

Kraft or is it Craft - that dude can play in your face defense. Taylor will have to really step up to play with him.

I hate to be a hater. I love our Jayhawks and I'll always be a fan. But, KU is gonna get their hiney's beat on saturday, by alot.

OH ya, Hey Jesse, your posts dont show up on the main page anymore. I have to scroll down to the UCLA game to find them. Whats up?

A lot of us have had that same question. Missed you Jesse.

Of course there's the other argument that playing more minutes makes one more comfortable on the court, lessening the stress factor when taking shots.

Hopefully he will break out of his slump tomorrow. We're gonna need an extra 3 point gunner on the floor. We're gonna need <10 turnovers. We're gonna need a monster game from TRob and Withey. All that plus a wild AFH could = a win/upset. Im still nervous as heck though. If KU doesnt bring their A game, it could turn into a rout, big time. I got razzed pretty good for saying that but its just honesty.

I would give the first half to Thomas, the second half to Jeff as top rocker vs. LBSU. Many more 9 block and near triple double performances, and Jeff will also be in running for Big 12 POY. His emergence has become a major blessing for a team whose guards play such careless ball control. If we don't clean up passing by Sat. afternoon, Craft will notch double figures in steals.