Welcome back to "Breakdown," where we'll look at a KU play each week and try to go a little more in-depth into why it did or didn't work.

Here is a replay of two separate successful sprint draw runs that KU had in its 42-16 victory over New Mexico State last week. You can click back to this video later in the blog if you need to.

Before we dive too much into the plays, I wanted to start by giving KU offensive coordinator Chuck Long's take on his team's successful draw plays.

"It's based off kind of a sprint action," Long said. "It pulls the defense with quarterback and opens those holes. It's really a tackle-to-tackle play. The running back has from tackle to tackle to pick any hole and let it fly.

"It's a unique play. It's part of the draw schemes we have, and it's tough to defend."

Coach (our Div. II assistant) says this play is successful because it deceives the defense into thinking that the Jayhawks are going to pass. That starts up front with the blocking. 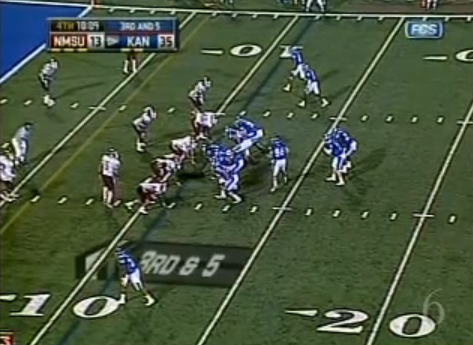 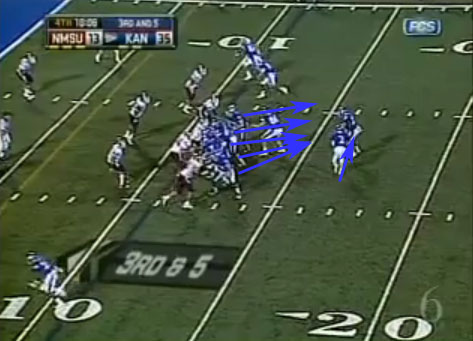 Notice what each KU offensive lineman does after the snap? Each one of them pops to the left, while KU quarterback Jordan Webb sprints to his right.

Coach says this is called turn back protection. Essentially, each of KU's blockers is "turning their back" to the where the quarterback is headed, which allows them to put themselves in a better position to pass block.

Coach says that turn back protection is most common in sprint-out passes, meaning that NMSU's defenders are expecting Webb to roll to his right to try to complete a pass.

So how does this affect the NMSU defense? 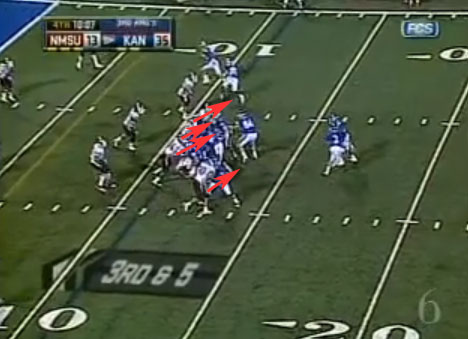 This is perfect for KU. 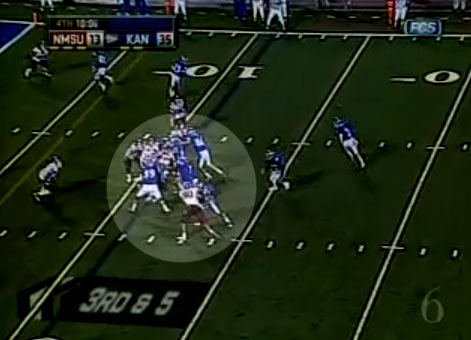 Once Webb hands the ball off to running back James Sims, KU's offensive linemen swing around to trap NMSU's defenders to the inside. NMSU's defenders have done most of the work for KU, as they have over-committed and rushed too far too the left after being duped by the play fake.

KU also disguises this draw play in a couple other ways.

The most obvious way is running in a passing down, as KU is facing a third and 5. 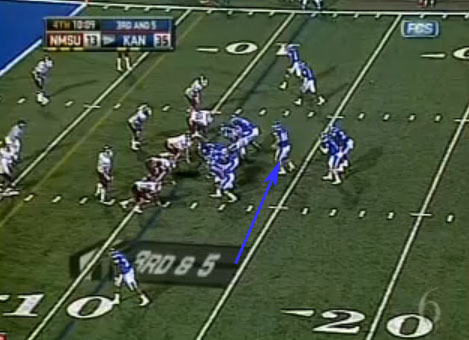 "86 goes in motion to secure the edge over there," Coach says. "That shows, ‘Hey, we’re going to be sprinting out to our right here.’"

Also, take a look at KU's receivers on the video. 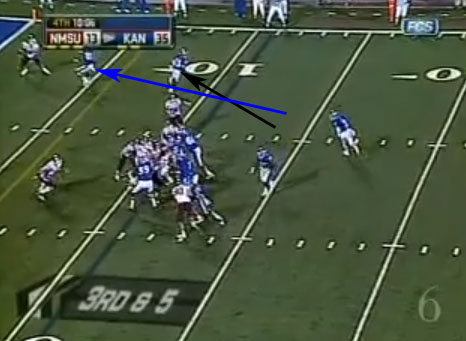 Daymond Patterson runs an arrow route (taking a 45-degree angle toward the sideline) while Johnathan Wilson runs a fly route, further selling the pass fake to the left side of the NMSU defense.

Let's move on to the second play, which Coach says is blocked very similarly to the first.

It appears from the video that KU audibles to this play. Coach says there would be a good reason for that. 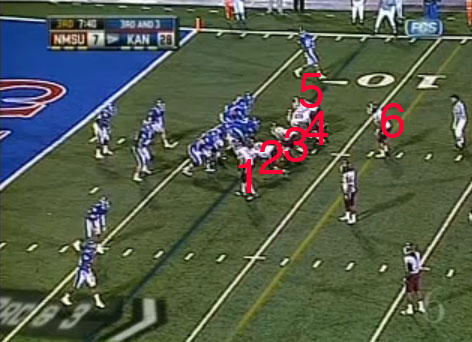 "There’s only six defenders in the box," Coach says, "so they’re going to run a running play instead of running a pass play."

In case you were wondering, Coach says the defender between the hashmarks would not be considered "in the box," as he is a bit too far back and to the outside to be considered a hindrance for a potential running play.

Once again, KU's offensive linemen use turn back protection to fake a passing play before sealing the NMSU defenders inside. 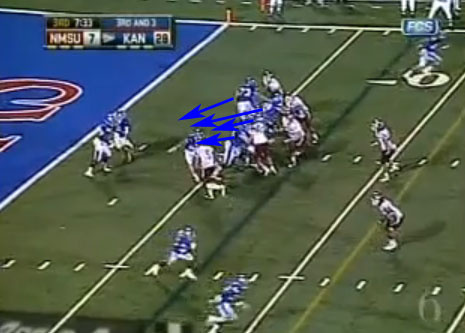 Also, we've talked about low-hat, high-hat read before in this blog. Notice that when KU's offensive linemen pop up, or show a "high-hat read," the defenders are going to assume that they are dropping back in protection for a passing play.

One final interesting part of this play. Remember that Long said this was basically a tackle-to-tackle run, and that the running back could choose his hole and run through it?

Coach says that while the running back will be open to choose any path he wants to run through, his aiming point is probably going to be the inside of the left tackle, which is Tanner Hawkinson.

Hawkinson's job is to try to influence the defender in front of him to come as far upfield as possible, thus taking that defender out of the play.

On the first play, the defensive lineman across from Hawkinson doesn't come upfield too far, so after a few seconds, Hawkinson does his best to secure him with a block. 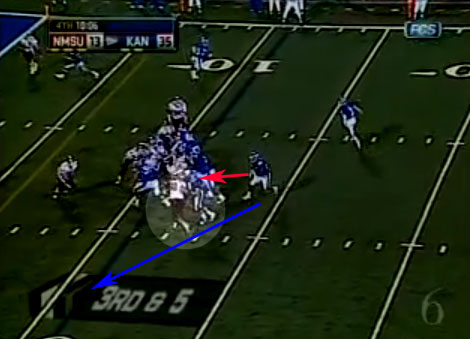 Sims' possible aiming point is signified by the red arrow. That's where, in a perfect world, the run would go.

But the back notices that Hawkinson has managed to pin his defender to the inside. That makes the blue arrow the better route, allowing him to make it all the way to the end zone.

The second play turns out much differently. 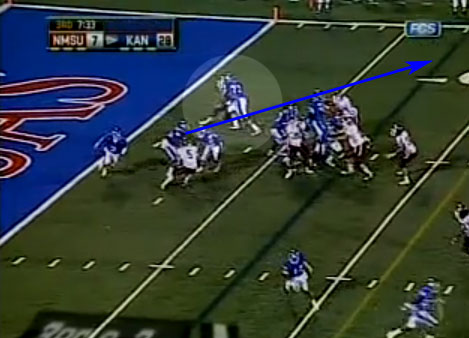 This time, the NMSU defender comes way too far upfield on the pass fake, making Hawkinson's job easier. This time, Sims can easily aim for the inside of his left tackle, running through a huge hole on the left side.

"I think the (offensive linemen) are all just doing their jobs," Coach says, "and it ends up being a successful play."

Expect the Jayhawks to continue using a steady dose of sprint draws, especially on third downs.

"It's one of those plays right now that the other team may know it's coming, but they're having a hard time stopping it," Long said. "Those are your base plays in your offense that, hey, regardless of what they do, we're going to make this one work."

You should break down some KU volleyball.

Now, do you have a video of the offense passing from the same formation? What play will/did Kansas run to set this up. I imagine Baylor will be ready for the "deception" even if they only watch this YouTube.

And I have a hard time giving 100% credence to Long's quote.

"It's one of those plays right now that the other team may know it's coming, but they're having a hard time stopping it,"

Eventually, if they know it's coming, they'll stop it. Especially now that Big 12 play is upon us. Even perfect execution won't cut it, when a school like Nebraska "knows it's coming".

Did Webb do a lot of sprint outs? I didn't see the game.

It is interesting to see both plays, and the differences in them. It would be even more interesting, especially as the season progresses to see how they ran (or not) this play in the NDSU or earlier game. There has obviously been a tremendous change in execution over the past month. It will be interesting to watch the execution continue to grow over the year.

I would like to see some breakdowns of pass rushing.