Blog from New Orleans: Self, players speak at podium, plus videos, photos and panoramic views from the Superdome

With that, we're going to wrap up the live blog here from New Orleans.

Be sure to check back to KUsports.com for more coverage, including the GameDay Cram Session and live-game blog Saturday as KU attempts to advance to the national championship game.

Here are a few of the photos: 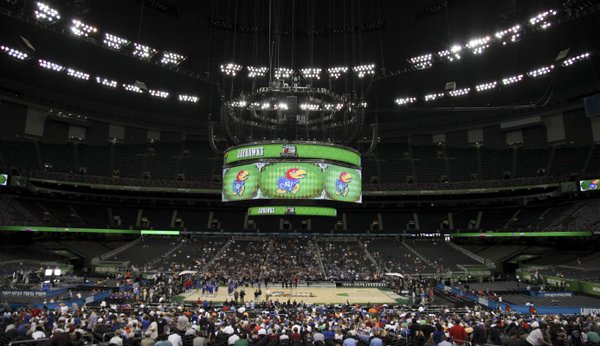 The Kansas Jayhawks take the court for practice at the Superdome on Friday, March 30, 2012. by Nick Krug 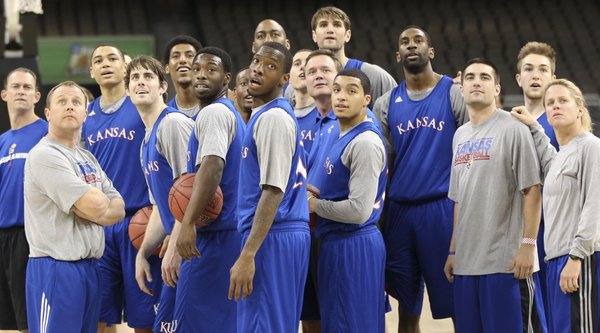 Kansas players, coaches and staff watch a half-court shot to end practice at the Superdome on Friday, March 30, 2012. by Nick Krug 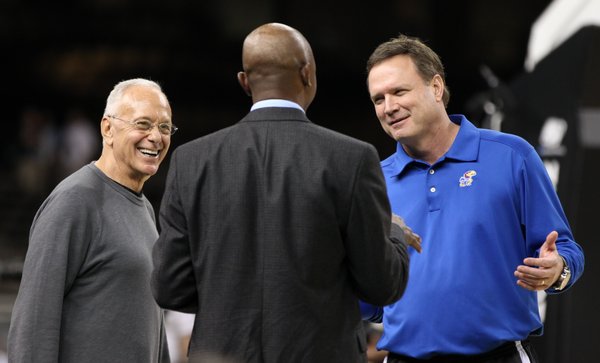 Former Kansas coach Larry Brown, left, laughs as he and Kansas head coach Bill Self talk with CBS commentator Greg Anthony during a day of practices at the Superdome on Friday, March 30, 2012. by Nick Krug

Kansas guard Elijah Johnson had the quote of the day again today. This is from the transcript of his time at the podium:

Q. "The court feels like you're up on a stage. Could you talk about the court."

ELIJAH JOHNSON: "No, I actually did feel like I stepped onto a stage. I felt like I was about to rap (smiling).

"I guess you could say the light's on. The floor felt good. I don't know, it felt like a make-believe court. I don't know if it was because it was elevated or what, but the court just seemed longer.

"But I like it so far. I plan on having fun up there."

Obviously, I'm sure KU fans couldn't help but think back to 2008 when guard Rodrick Stewart was injured while attempting a highlight-reel slam at the end of the Jayhawks' open practice at the Final Four.

KU just wrapped up its time on the court. KU coach Bill Self never does too much in these open practices, and this was no exception. KU stretched and then just had a low-key shoot-around — a workout that was much lighter than Ohio State's.

Self ended the practice 15 minutes early, then was interviewed briefly by CBS's Jim Nantz.

When asked about this year's success, Self told Nantz, "All teams like each other, but this team takes it to a whole other level."

Also, when Nantz asked Self to give a pep talk to all the KU fans in attendance, Self joked, "If they expect us to bring our 'A' game, then I think they all should have curfew by midnight tonight to bring their 'A' game."

Wonder what it's like to be in KU's locker room during the Final Four?

Here's a panoramic look from the open locker room session with reporters about an hour ago.

The data shows just how important it is for Thomas Robinson and Jeff Withey to stay on the court together. To do that against Ohio State: 1. Robinson has to be able to guard Deshaun Thomas on the perimeter, and 2. Withey needs to stay out of foul trouble.

Some notes from Ohio State's time at the podium:

• Jared Sullinger said that Thomas Robinson plays hard and plays smart. In his eyes, Robinson is the college player of the year. If you look at his season, the way he took his team to top, you've just got to look at him being that guy. He deserves everything that's come his way, and he's a good guy.

• Sullinger said he would have hurt Ohio State's team if he'd have played in December against Kansas. Sullinger was very stiff. Sullinger thinks KU would have attacked him all day on ball screens or in the post, because he was tiptoeing that day. Ohio State would rather risk a game early in season than in the NCAAs. It was the smartest decision for the basketball team.

• Aaron Craft says Sullinger may or may not have had impact on the KU-Ohio State in December. The team can't think Sulllinger is an instant fix for beating the Jayhawks. KU is a good basketball team, and it has gotten better since December.

• Sullinger says by coming back this season, he wanted to make a statement that not everybody is using college basketball as a pit stop before the NBA. There's more than money and endorsements. There are championships to win at every level. Sullinger has won championships at every level from elementary school until now.

• Sullinger says he's cool with Robinson. He's a great guy off the court. Everybody expects this big strong man with tattoos to be ultra-aggressive off the court. He's cool. He's very chill. He wants to always handle his business. At summer camps, Sullinger and Robinson were helping each other out, suggesting post moves to each other for certain situations.

About to head into interviews for both Ohio State and Kansas, but before that, I wanted to post a short stop motion video from the Buckeyes' practice today.

In the video, you can see about 2 1/2 minutes of Ohio State's practice in 10 seconds.

Ohio State, by the way, went pretty hard in its open practice. Typically, these types of practices aren't taken that seriously, but the Buckeyes were going full speed.

Also, here's a panorama I shot from the court on Thursday with my iPhone. It's not perfectly lined up, but I think it gives you a good idea of what it's like to be on the court here (be sure to scroll up on the panorama as well).

Welcome back to the NCAA Tournament blog, coming live to you from the Superdome in New Orleans, site of this year's Final Four.

Here's the schedule for today:

That means Ohio State is practicing on the court in front of me right now: 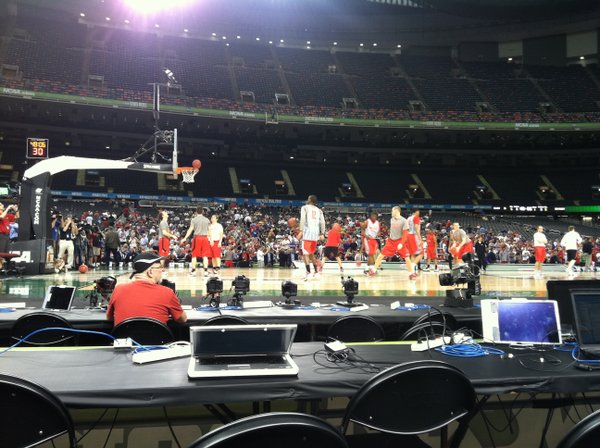 Ohio State players shoot at open practice on Friday, March 30, 2012, in the Superdome in New Orleans. by Jesse Newell

A couple links to start off the blog:

• Nice column by Tom Keegan outlining why Thomas Robinson needs to step up his defense ...

T-Rob must extend his ‘D’ by Tom Keegan KUsports.com

• Five-minute statistical scouting report on Ohio State, if you haven't seen it yet.

We'll be back with updates throughout the day here, so be sure to keep checking back for more coverage from New Orleans.

Don't be "Stupidmichael"..Did you really expect them to be in NOLA?..Go Hawks..

I'm scared too...see link below. I heard it from Gene WoKentuckyski himself.

Jesse, et al. It appears that the trophy is going to be awarded to Kentucky by default. No need to play the games this year.

Dear Coach Self (although I am sure you are doing something other than reading this), please print out the link above and post it in all the lockers. Get these Jayhaws mad at the world!

He doesn't even have his facts right in the article, KU lost to Davidson yes, they were not at home, they were in the Sprint Center in KC. MO.

How about a shot showing what the basket looks like in the dome from the three point line? I keep hearing about how tough it is in a dome. Thanks.

Good stuff. Thanks for sharing. Unlike the Eastern Sports Programming Network, the Wall Street Journal favors quality over quantity.

thx for the links.

Underdog seems to be working just fine this postseason.

Well evidently its a foregone conclusion that OSU will beat KU and UK will win the whole thing. Its like only three teams are in the final four this year. There is so much fuel to burn the 'us against the world' fire for these kids right now and nobody is better at coaching in that situation than Billy Boy. Im excited. Im expecting one of our best games of the year as the entire world forgets were even in this tournament. Purdue should have beat us but they choked (we had nothing to do with it) as did NC State. If Kendall Marshall had been healthy UNC obviously would have crushed us. Were lucky just to be here, like a mid-major. The game against OSU earlier this year doesnt even count b/c Sully couldnt/didnt play. Its unbelievable. But you know whats great about that, were playing with house money and have no pressure at all. Our guys can just go play loose and I expect they will. And when theyre doing that, were a really tough team to beat. RCJH!!!

What a jerk question from the Cleveland reporter.

Hey Jesse - how were the 'hawks guards shooting from 3 during the shootaround? Were they falling?

The guards were shooting threes, but it's really tough to distinguish one shoot-around from the next.

Jesse - nice panoramic shot. You need to get wasted on Bourbon street and take some sweet (random panorams of the crazies) pics there.

It hasn't been all that long ago, but I've forgotten how much fun it is to be in the Final Four. Very happy for this team.

Congradulations to Hummel on the senior class award. He deserves it.

Great info as usual, Jesse! Thanks!

great blog! thanks for making my Friday! did TT make any of 3s during practice at all? i really hope he won't be nervous tomorrow.

I think it is pathetic tha we have to run a photo of a kid that destroyed his knee before the 08 Carolina game. Just my opinion though.