Videos, photos, quotes and Cliff's notes versions from Releford, Teahan and Self at podium

We're going to wrap up the blog from here at CenturyLink Center. Be sure to check back to KUsports.com for all your KU tournament coverage, which will include a Spodcasters episode later tonight and the GameDay Cram Session on Sunday. 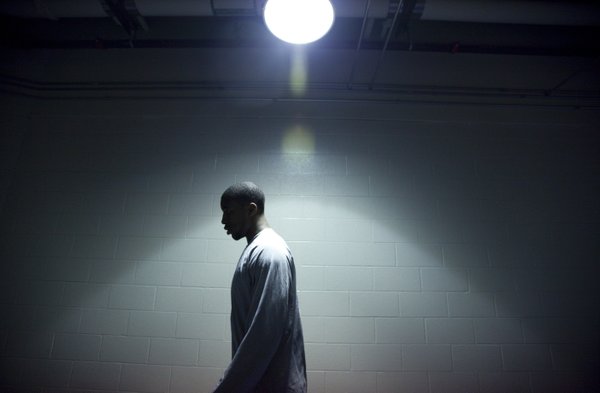 Kansas forward Thomas Robinson makes his way through the hallways of CenturyLink Center as the team prepares for practice on Saturday, March 17, 2012. by Nick Krug 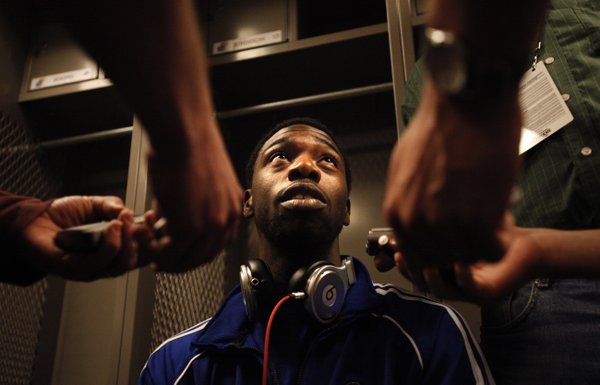 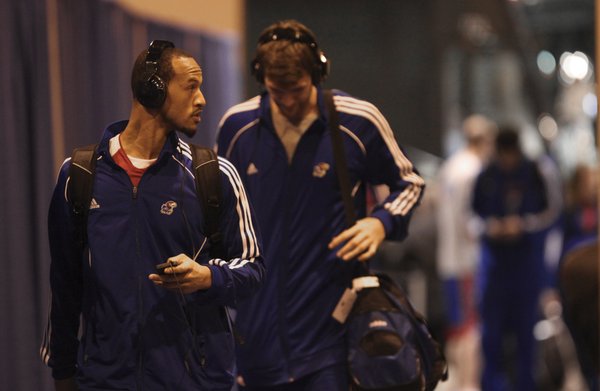 Kansas guard Travis Releford and center Jeff Withey make their way into the arena for interviews and practice on Saturday, March 17, 2012 at CenturyLink Center in Omaha. by Nick Krug

Here are a couple of the notable comments from Purdue's time at the podium:

"We have played in tough environments and tomorrow is going to be no different. I'm sure we will have our 400 fans and Kansas will have the rest."

Purdue coach Matt Painter, on the possibility of playing "big" against KU:

Here's the one-on-one interview with Purdue's D.J. Byrd, who talks about how interesting it was to be next to Norfolk State's locker room on Friday.

Here is the Cliff's notes version from KU coach Bill Self at the podium:

• KU is excited to play Sunday. Friday was a long day and a late night, but Self thinks his team has its batteries recharged.

• The challenge for KU is to match up with Purdue. KU has to pull its natural bigs out to defend the three-point line. KU really has to do a good job of getting out to shooters. KU's big men will be responsible for a lot of that.

• Self said, as a coach, you can't burn energy on anything in the tournament that doesn't affect you, like other teams' upsets. Self has taken the approach that one team is going to wear a dark uniform and one's going to wear a light uniform, and you're going to have to beat a good team to advance.

• Season stats don't mean much to Self when evaluating an opponent. The KU coaches will look at conference stats. In the last 10 games, Purdue is 48 percent from three. Purdue shoots a lot of threes as well. True motion offense is hard to guard, especially when you have bigs that don't play as much on the perimeter.

• The KU coaches thought Thomas Robinson could be an all-league type guy early in his career. His freshman year, he was KU's fourth-best big man, and Jeff Withey was KU's fifth-best big man. For Robinson to do what he's done .. no one has predicted that. He tries really hard and cares a lot. He has had a remarkable year, because he's taken a tragic situation and used basketball as his outlet to spin something positive out of it. Everyone admires him from KU's camp because of that.

• Self doesn't think bench play is as important as many people think. KU looked nervous early in the Detroit game. KU had a lot of turnovers early, but after that, KU settled down and looked fine. It was good to get Kevin Young and Naadir Tharpe some minutes.

• Self likes new KU football coach Charlie Weis. Self thinks his resume is pretty incredible when you study it. He's had good and bad experiences and talks about both. Self feels like for KU, it needs somebody that would draw enough interest that people would want to look at the newspaper to see what he says. Self thinks there will be an increase in ticket sales because of him.

• How can you not respect Robbie Hummel after what he's been through physically? After two ACL injuries, he's averaging 16 points per game. He's a stud. He's really a big guard. Self doesn't know who KU's played like that. He's bigger, but he's kind of like Missouri's Kim English. He's a challenge like that, which is a pretty good compliment.

• Self thinks when a guy is a really good player like Matt Painter was, then he cuts his teeth coaching on his own elsewhere and has success, it's no surprise to anyone that he's done well at Purdue. For an alum to step in and have a chance to coach at his school ... there's no surprise he's done well.

• Self thinks casual fans put all the emphasis on the NCAA Tournament. Season-ticket-holders probably put emphasis more on regular season, but still a lot on postseason. KU has experienced everything: highlights and first-round exits. If you coach long enough, you're probably going to experience a little bit of everything. Self thinks going the the Final Four now is as popular as winning a national championship was in the 1970s, in terms of hype. In order to have a special season, you have to play well in March.

• Self wants to see Tyshawn Taylor in practice today, but he thinks he's fine. He cramped in Hawaii, too. Friday, he said his calf was sore.

• Jeff Withey is playing about as well as he can. He's not going to be a go-to guy offensively, but he's going to have some nights where he can get 12-17 points. Self thought there was a stretch in the second half Friday when Withey was no doubt the best player in the game because of his defensive presence.

• Elijah Johnson played pretty well at point guard Friday. Detroit's pressure wasn't as good in the second half, which happens a lot in tournament games with the early emotion involved. Johnson's point-guard play was encouraging for Self, because Johnson hasn't had a chance to do that much this year.

• The more KU shares and relies on each other, the better it is. KU usually relies on Robinson and Taylor to set the tone for that.

Here is the Cliff's notes version from the KU players during their brief time at the podium:

• It's definitely a challenge to guard a team that plays small like Purdue. Missouri does some of the same things. Defensively, that can cause problems.

• Perimeter-wise, Teahan feels good about KU's defense. Tyshawn Taylor and Elijah Johnson do a good job of matching up against guys with their quickness.

• The way that Kevin Young and Naadir Tharpe came in against Detroit was a bright spot. Kevin played great. Conner could tell Kevin was nervous with his first NCAA game. It was good to see those guys come in and play well. It might also help with Sunday's game to have Tyshawn Taylor a little fresher.

• Conference pride is huge. Purdue played in a lot of big games already. A lot of guys on KU feel like Big 12 is up there as far as one of the best conferences in the country. Conner thinks head-to-toe, the Big 12 was as good as any conference.

• KU has guys that can match up with strength on the perimeter. KU's players just need to come out prepared for anything.

• KU knows Purdue is a great shooting team and can stretch the floor at positions 1-5.

KU coach Bill Self and a couple players will step to the podium in 10 minutes.

Afterwards, check back here for a Cliff's Notes version of their comments.

Just finished up an interview with Purdue's D.J. Byrd that will be posted shortly. Byrd has emerged for the Boilermakers this year, earning Big Ten Sixth Man of the Year.

Most of Purdue's players — Byrd included — seemed surprised by all the media attention that KU brings. I was barely able to escape the locker room with a three-deep row of cameras surrounding Robbie Hummel by the entrance.

Welcome back to Omaha, Neb., where Kansas is a little more than 24 hours away from playing 10th-seeded Purdue in the Round of 32.

We'll be updating the blog with some highlights from today's media sessions. Purdue will talk at 3:10 p.m., while KU is set for 3:55 p.m.

While you wait, here are a few videos and links, just in case you missed them.

• Five-minute scouting report on Purdue, and discussion of the Boilermakers' reliance on lottery tickets.