We're going to wrap up the blog from here in the CenturyLink Center.

Before we go, here's a podcast with Matt Tait where we discuss our observations from the day.

Be sure to check back to KUsports.com on Friday for all your NCAA Tournament coverage in the Jayhawks' first game.

Earlier this week, Detroit forward Eli Holman made headlines after being quoted as saying, "(Thomas) Robinson? I can handle Robinson. He has to handle me."

Matt Tait caught up with Holman in the locker room today. There will be much more in Friday's story, but here's a quote from Holman about his previous soundbite.

"The comment kind of got blown up a little bit," Holman said. "So I'm gonna clear that up now. That wasn't exactly what I said. Thomas Robinson is a great player. He's projected as one of the top five picks in the (NBA) draft (in June) and the guy's a beast down low. But what I'm saying is Detroit's here too, now. And we're coming to play."

We talked about the athleticism of Detroit's Doug Anderson earlier. Here's another example of it from a video shot at practice earlier today by Tom Keegan ...

Some interesting/funny responses from Tyshawn Taylor and Elijah Johnson when asked about Missouri earlier today:

Question: You guys won't have two play them but do you have any thoughts on Missouri being in town with you guys this weekend?

Question: Are you going to root for them?

The last of our one-on-one interviews, this one with senior walk-on Jordan Juenemann. He talks about enjoying the food in Omaha and also doing everything he can to help prepare KU's starters for Detroit.

Here's the next one-on-one video interview with KU forward Justin Wesley. The sophomore talked about cheering for KU in the NCAA Tournament from his dorm room last year and also was honest in the evaluation of his own game.

KU forward Justin Wesley on his individual play: 'It has to be better' by Matt Tait

KUsports.com photographer Nick Krug has a photo gallery up. Here are a few of the shots ... 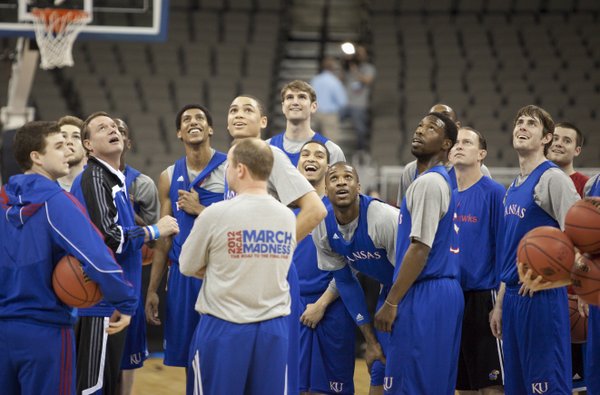 The Jayhawks and head coach Bill Self look up with anticipation as they follow a half-court shot from a player at the end of practice on Thursday, March 15, 2012 at Century Link Center in Omaha. by Nick Krug 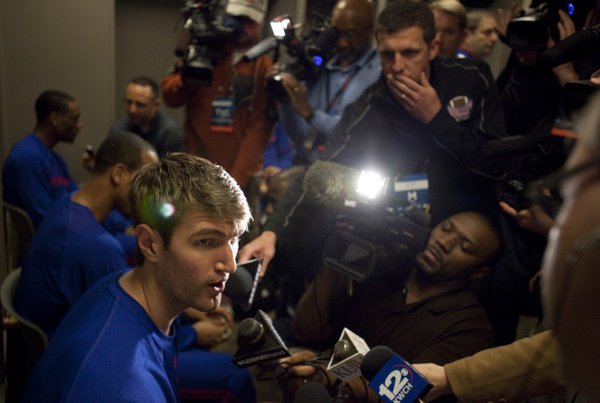 Kansas center Jeff Withey answers questions in the team's locker room prior to taking the court for practice at Century Link Center in Omaha. by Nick Krug

Kansas forward Thomas Robinson smiles during an interview in the Jayhawks' locker room at Century Link Center in Omaha. by Nick Krug

Here's the first of our one-on-one interviews, this one with KU guard Conner Teahan. The senior talks about memories from Omaha and areas where KU needs to improve defensively against Detroit.

And also audio from KU coach Bill Self from the podium.

Here's the audio from KU guards Tyshawn Taylor and Elijah Johnson at the podium a few minutes ago.

Just got back from the KU locker room and will have video interviews with Conner Teahan, Justin Wesley and Jordan Juenemann up shortly.

Just a heads-up: We'll be with the Jayhawks during the entire 30 minutes they are available, so there might not be an update for a little while. After that, though, we should have quite a bit to talk about from here in Omaha.

Welcome to the CenturyLink Center in Omaha, Neb., site of the Kansas men’s basketball team’s Round of 64 game Friday against Detroit.

Today is the pregame media session, meaning all eight teams at the Omaha site are here to talk to reporters about their upcoming games. KU’s players and coaches will talk to media members starting at 4:30, with open practice to follow at 5:10.

We’ll have updates throughout the day here, but I wanted to start with a couple videos/links in case you haven't seen them yet.

• Here's an interesting video that has interviews and footage from inside a Detroit practice earlier in the year. Gives some nice insight into what Ray McCallum's coaching style is.

All-Access with Detroit Mercy from CollegeInsider.com on Vimeo.

• When KU coach Bill Self talks about Detroit's athleticism, he's definitely talking about 6-foot-5 junior Doug Anderson. Here are a few of his dunks:

• Also, here's a story talking about Wilt Chamberlain being the Babe Ruth of the NBA.

Who will be traveling to "parts unknown" to interview me after I win the bracket challenge?

Ashville had a couple of calls go against them.

Those bad calls are just going to increase the stink around the Syracuse program. While I just think the refs had a bad game, I'm also not surprised if a whole lot of people think the big-name teams get all the "breaks" in tourney games.

"How do you like my new nose? It's my basketball nose...I just got it fixed."

no update on this site, but espn is reporting that we got a gigantic defensive tackle from nebraska who graduated... awesome news for the football program.

Dunk number one in that Anderson highlight reel was as blatant an over-the-back (non)call as I've ever seen. Apparentl that foul somehow was called against the guy with inside position.

Also looks like blocking out properly isn't emphasized in the Horizon League.