Bill Self pleased with Jayhawks for grinding to Big 12 title

Kansas basketball coach Bill Self was happy to see his players add to the program’s stash of trophies with a win over TCU in the Jayhawks’ home finale.

“It feels good,” Self said. “It’s a goal every year to try to win the league, and this obviously guarantees us a share of it. We’d like to go down and take care of business Saturday to win it outright (at Texas Tech). It’s been kind of a long grind through the conference season, especially when you start off from behind and the team in front of you never loses.”

Following the No. 1 Jayhawks’ 75-66 win over TCU in their home finale, seniors Isaiah Moss and Udoka Azubuike and sophomore Devon Dotson share their thoughts on the achievement.

KU Sports Extra - The Dok and Dotson Show in Fort Worth, Texas 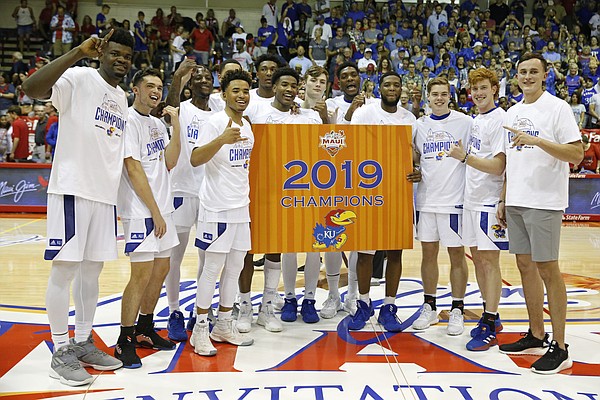 We had some uploading/WiFi issues in Maui on the final day of the 2019 Maui Invitational, but luckily, the tournament itself had us covered.

Here's the complete KU basketball postgame news conference following the Jayhawks' 90-84 overtime victory over Dayton in the Maui title game on Wednesday at Lahaina Civic Center along with a few other videos of interest from KU's big day.

Led by a combined 60 points from the tournament's co-MVPs, Devon Dotson and Udoka Azubuike, Kansas improved to 6-1 with its third win in three days and second consecutive Maui Invitational title.

Bill Self and the Jayhawks now have won six consecutive games at the Maui Invitational, dating back to their title run in 2015, and the fourth-ranked Jayhawks also have won six games in a row since losing the season opener to Duke in New York City.

Next up, the Jayhawks return home for a matchup with former conference foe Colorado on Dec. 7.

If you missed any of our coverage this week from Maui or just want to go back and reminisce, you can find links to all of our stories about KU's run to the 2019 title on the KU basketball schedule page.

.@DaytonMBB heads to the media room after losing to @KUHoops 90 – 84 in the Championship game of the 2019 Maui Jim Maui Invitational #MauiHoops https://t.co/wTkanEIffH