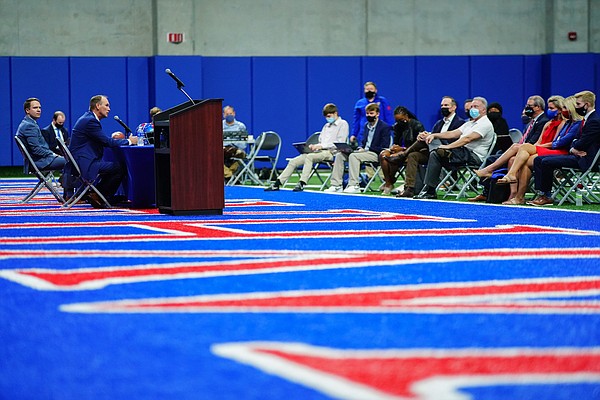 On Monday morning, three days after his hiring was announced, new Kansas football coach Lance Leipold met with the local media for the first time at KU's indoor facility.

In addition to introducing himself, Leipold, along with KU AD Travis Goff, fielded questions about the search that landed him, the fit, his plans for the Jayhawks and the future of Kansas football.

Several KU supporters and staff members were in attendance at the introduction, which came one day after Leipold met individually with KU's coaching staff and just minutes before he began to do the same thing with the KU players.

While there remains a lot to analyze and watch and break down in the coming months as Leipold and company begin the process of rebuilding the program, there was a lot of interesting information to take away from his first public moments on KU's campus.

Here's a look at our thoughts on some of that...

• After making leap from D-III to FBS, Lance Leipold not intimidated by latest jump to KU football

• Matt Tait: The fit for Kansas and new football coach Lance Leipold appears to be a two-way street

• Three things that stood out about Buffalo O.C. Andy Kotelnicki after watching his coaching clinic