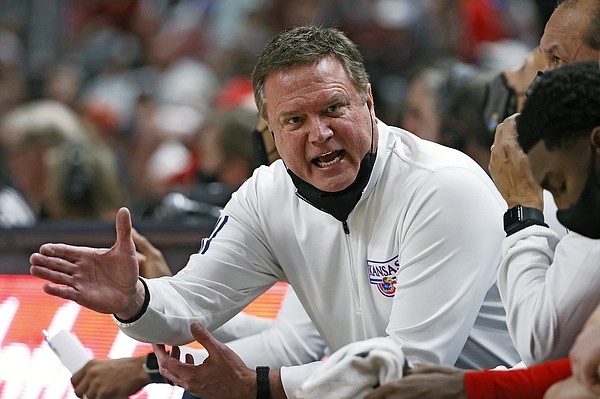 Kansas coach Bill Self talks to his team on the bench during the first half of an NCAA college basketball game against Texas Tech, Saturday, Jan. 8, 2022, in Lubbock, Texas. (AP Photo/Brad Tollefson)

1 – Jalen Wilson – Wilson finally scored and knocked down shots but didn’t rebound and turned it over four times. While that give-and-take didn’t help much in terms of the bottom line of Saturday’s loss, it might wind up being huge for the big picture of KU’s season. And on a rough day like the one the Jayhawks encountered on Saturday — in a 75-67 road loss at Texas Tech — that was good enough for the top spot.

2 – Ochai Agbaji – Like Wilson, Agbaji was solid offensively but struggled in another key area of the game — defense. Part of that was the fact that the Jayhawks had no one inside who could help out the wings. And part of it can be chalked up to just one of those days. Still, any time a guy hits 6 of 9 from 3-point range and goes for 24 points, it’s hard to be too critical of the rest of his game. The 3 turnovers weren’t ideal, but he did play 35 minutes and was perfect at the free throw line, as well.

3 – Dajuan Harris Jr. – Dajuan didn’t do much in the way of offense, but that’s not exactly a huge surprise. What he did do is compete and take care of the basketball, which was a lot more than most of his teammates could say. Dajuan finished with 3 assists and 0 turnovers. On a day when your top three scorers also turned it over 10 times combined, that goose egg really stands out.

4 – Christian Braun – Braun had a stretch where he went full-on mad man, and it nearly willed the Jayhawks to a comeback victory. But he was far too quiet for far too long before that and he also turned it over three times while getting back just one of those giveaways. He did finish with 6 rebounds, but given his role on this team, those numbers and his presence weren’t anywhere near as good as KU needs them to be to win on the road.

5 – Jalen Coleman-Lands – I wanted to put Coleman-Lands lower, but I kind of also wanted to put him higher. Weird. The way I see it, at least he was out there down the stretch competing and trying his butt off. And, hey, if he had made 4 of 6 instead of the 1 of 6 he did, it might’ve made a major impact on the outcome of the game. Coleman-Lands continues to look to pull the trigger and take good shots. That’s good enough for me. I’m going to go ahead and assume that percentages will bear themselves out and he’ll hit a hot streak sometime in the near future. If he’s going to be out there, he’s going to need to continue to improve defensively and also find a way to contribute something besides making or missing shots. But he’s a decent ball mover and a smart player with a veteran presence about him. Those aren’t things that show up on the stat sheet but they are still important.

6 – Remy Martin – He made just one shot, fouled three times and turned it over twice. And that doesn’t even address how often he over-dribbled. I get that he was hobbled, but even being out there on one good leg, you can still play smarter than Martin did on Saturday. KU needs him to get healthy in a hurry. And give him credit for trying to do something on a day when he was clearly less than 100%.

7 – KJ Adams – Adams played just 3 minutes and had one offensive rebound to show for it, but there’s something about the way he competes and always seems to be in the thick of the action that continues to lead me to wonder if increasing his PT might do wonders for this team. It might be too late in the season for that, but if all you’re going to get from your two bigs who have been here a combined 10 years is 4 points and 6 rebounds, it might be a better-late-than-never scenario. Giving him 20 minutes a game isn’t the answer. But giving him more minutes might be.

8 – Zach Clemence – There will be a lot of talk about Clemence’s +10 plus/minus number from this game. But it’s worth remembering that much of his time on the floor came when KU played that 2-3 zone and cut into the deficit as a result. Self put it perfectly when asked about Clemence after the loss. He did fine. But he also didn’t really do anything. His numbers reflect that. And KU would be taking a big leap of faith if it elected to suddenly start giving the talented freshman with a bright future 20 minutes a game. That’s not likely. But, like with Adams, 10 is not out of the question.

9 – David McCormack – Here’s everything you need to know about McCormack’s day. On the foul that sent him to the free throw line for his only two charity shots of the day, he missed a bunny that he had no business missing. It didn’t matter on the stat sheet, of course. And he got the two points anyway, by sinking both free throws. But something’s not right with McCormack. And it goes far beyond the issues that plagued him in the first half last year and the first half of this season. He looks far too hesitant and scattered to be effective and it’s hard to pinpoint what it’s going to take to change that — if anything can.

10 – Mitch Lightfoot – It’s hard to look at Lightfoot’s line or any type of replay of his day and put him any higher. He found immediate foul trouble, provided no resistance at the rim and did not record a single point or rebound. It’s hard to know where Self will go from here at the 5. But don’t rule out the idea of more minutes for Adams and Clemence. Lightfoot plays his role well when he’s asked to play it. But asking him to consistently do more might be unfair to him and unproductive for the team.

11 – Joseph Yesufu – Had a chance to be a real spark on a day where Remy Martin was ailing, but he misfired on the two shots he attempted — half points for at least taking them? — and played just 2 minutes in the loss.

Kansas coach Bill Self on 75-67 loss to Texas Tech: "We obviously didn't have 'em prepared" by KUsports.com

Kansas senior Ochai Agbaji meets with the media after scoring 24 points in a loss at Texas Tech by KUsports.com

I seem to recall having read articles here (LJW) about a strength of Coach’s being his ability to find the right buttons to push with each player to get them to play at the optimum level. This recap seems to point all the more to this group being a work in progress.

Matt - If we don’t start to get consistently meaningful production out of David, do you think there’s any chance that Cam sheds his redshirt similar to Ochai in his freshman season? I read a description of that season recently that described it as resulting from injuries to others but there were several transfers that were available but never stepped up to produce or he could have kept his RS. It’s the opposite this year.

Interesting question on Cam, Dirk. I hadn't thought of that option. My gut tells me it's not one, but I'll look into it.

Why do you even reference the +10 (+/-) rating for Zach. It's meaningless but maybe you have some inside dope -- like what coach Self thinks about it?

Coach Self earns an “F” for his team’s pitiful attempt at defense. Tech was playing without its star scorers and shooters - Shannon and McCullar - so Tech did what it had to do...drive or pass into the paint and take easy shots. Self couldn’t figure out how to do it with man-to-man defense and eventually tried to get his troops to play zone. Nothing worked.

Message to Big 12 opponents: the Jayhawks cannot stop ANYBODY from getting into the paint. Be forceful and KU folds.

We were out muscled and out smarted. Much of the time it looked like men against boys. The defense was shockingly bad. We do not have a 5, and unless we find one, this scenario will likely be repeated a number of times in Big 12 play. Just not much to be optimistic about, though it was great to see Wilson come out of his offensive funk in a big way.

TT was extremely aggressive, a lot of our turnovers were forced by them, not sloppy play. We did miss a lot of opportunities to continue to cut the lead, a few bunnies at the rim, and all day TT's hands just seemed a wee bit quicker.

Let's be real, we lost to a ranked conference team on the road, and TT did keep us at arm's length but it took 40 minutes. There is too much unselfishness on this team, I can't remember how many time I was yelling to take a shot before they got a steal, better to get an average shot than no shot at all. And as for D-Mac, well, got no answers there.