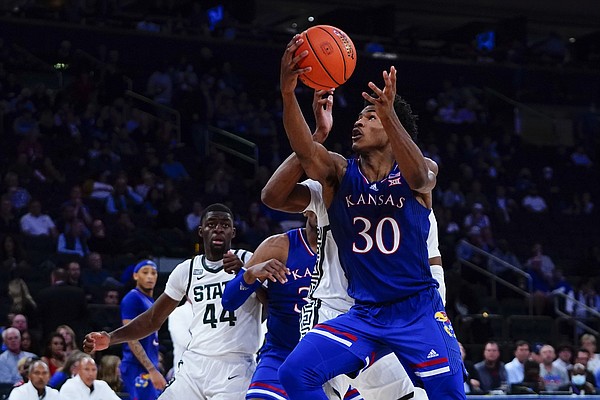 1 – Ochai Agbaji – Sensational start to his senior season made Ochai the highest individual KU scorer in the history of the Champions Classic. And he got all of it within the flow of the offense and without trying to do too much.

2 – Dajuan Harris Jr. – Steady and solid on both ends throughout the night, Harris played a shade over 35 minutes and finished with 6 points, 4 assists, 0 turnovers and three steals.

3 – Remy Martin – A slow start did not keep him down. Martin’s second half was much better on both ends and the jet-quick point guard finished with 15 points, 6 rebounds and a 4-for-4 clip from the free throw line down the stretch.

4 – Bobby Pettiford – The freshman guard played 11 minutes and scored five points while dishing two assists for a team-best plus/minus number of +14. His and-one finish that will go down in the history books as his first college basket was ultra-tough in every way. And he hit the free throw to make it count.

5 – Christian Braun – He didn’t shoot it well (3-for-7) but he played 34 minutes and finished with a couple of key assists and a team-high eight rebounds.

6 – Zach Clemence – The freshman sparked the KU offense with 7 points in a 4-minute stretch during the first half. And he nearly had three more when a second 3-point attempt just missed. His emotion and ability to show he belongs on the big stage was merely the beginning for a kid who has had a great preseason.

7 – Mitch Lightfoot – The reliable veteran delivered 10 solid minutes in relief of struggling starter David McCormack by doing the things that he’s known for doing — hustle, scrap and be in the right place at the right time. Self said after the game that Lightfoot would’ve played more if not for his four fouls.

8 – David McCormack – Not the start the big fella was looking for, but he did enough to tally 10 points and scored some key baskets while the game was still close and he was contending with MSU’s size and strength. His block of Malik Hall’s dunk attempt was one of the top five highlights of this game.

9 – KJ Adams – The big block at the end of the first half and the energy he brought to the court during the limited time he was out there (3:46) show the potential. Now it’s just a matter of finding a role and being consistent.

10 – Jalen Coleman-Lands – Still fighting a toe injury, Coleman-Lands misfired on four of the five shot attempts he let fly but showed that he was not afraid to pull the trigger when open. KU will need that sooner rather than later and when Coleman-Lands is fully healthy it will be interesting to see what his role becomes. He played 9:37 in this one and showed a willingness to compete defensively.

11 – Joseph Yesufu – Played just 6:28 and didn’t do much to get noticed while he was out there, finishing 0-for-1 from the floor with one foul.

KJ Adams' block was at the end of the first half, not the second. I pretty much agree with the order. I hope David McCormack gets back to the end of last season's form very quickly.

In David’s defense, he was going up against a strong D center in his first game back. He did also have 2 blocks. Still, the others did step up commendably around him. Pettiford was notably on the court later in the second half as well I believe. Commendable recognition from Coach.

No Tarleton version 2 days out?