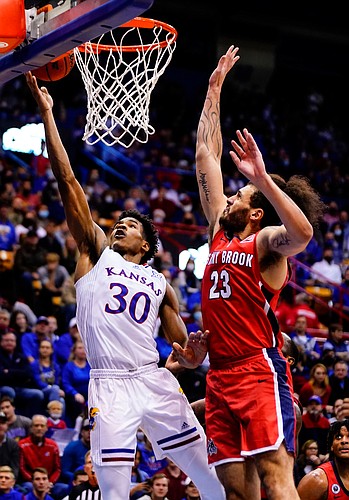 Kansas guard Ochai Agbaji (30) gets in for a bucket past Stony Brook forward Jaden Sayles (23) during the first half on Thursday, Nov. 18, 2021 at Allen Fieldhouse. by Nick Krug

1 – Ochai Agbaji – Three straight games of 25 points or better. All of it coming within the flow of the offense and with poise and consistency. Agbaji didn’t have his best first half of the season on Thursday night, but he came alive in the second half and made sure this one was never close after halftime. The crazy thing about KU’s senior leader is his teammates think he can still get better, too.

2 – Dajuan Harris Jr. – Finished with six assists and just one turnover while operating as one of just two Jayhawks (Agbaji was the other) to play more than 25 minutes. Harris’ defense also looked a step stronger in this one.

3 – Mitch Lightfoot – It wasn’t Lightfoot’s final numbers that put him high on this list. It was his impact. With starting big man David McCormack struggling out of the gate, Lightfoot came in and immediately gave KU an inside scoring option. He took five consecutive shots for the Jayhawks at one point in the first half, which seems a little crazy. But all but one of them were good shots and three of them went in. Lightfoot finished with 6 points and 3 boards in 11 minutes.

4 – Christian Braun – He still hasn’t found that gear that Kansas coach Bill Self believes he has, but he knows how to pack the stat sheet without it. Eleven points. Seven rebounds. And two assists. All on just five shots in 24 minutes.

5 – Zach Clemence – The KU freshman momentarily caught fire in the second half, hitting two 3-pointers and scoring another bucket inside. He finished with 11 points and six rebounds in just 12 minutes and is the early leader for the microwave award on this team. He gets hot in an instant and appears to have a whole lot of fun while doing it.

6 – Joseph Yesufu – Self said this was Yesufu’s best game as a Jayhawk so far, and his play — hustle, making good reads, digging in defensively — showed that far better than his numbers. Still, the Drake transfer scored 5 points and grabbed 3 rebounds in 16 minutes.

7 – David McCormack – After a rough start full of missed bunnies and too much energy, McCormack responded with better effort and production from there. HE fiished with 12 points and 8 rebounds in 15 minutes, but still needs to slow down and stay on balance — on both ends — to maximize what he can give this team.

8 – Jalen Coleman-Lands – Played 15 minutes, hit 3 of 4 shots and recorded a steal with no turnovers. The experienced transfer continues to show that he’s a valuable player to have on the floor simply because he focuses on doing the right things.

9 – Bobby Pettiford – Not his best night, but he did have two strong finishes at the rim and dished 3 assists. He found himself in trouble more times than in previous games by driving and jumping with nowhere to go. That’ll go away as he continues to gain experience and reps.

10 – Remy Martin – Did not score and attempted just two shots in 18 minutes after re-tweaking his back. Still managed 4 rebounds and 2 assists. And nearly had another on a nice drive and dish at the end of the first half. Agbaji just missed the shot.

11 – KJ Adams – Played just 6 minutes and missed his only shot — if you can call it that. Adams’ attempt at a follow-dunk late in the game would’ve brought the house down if he finished it.